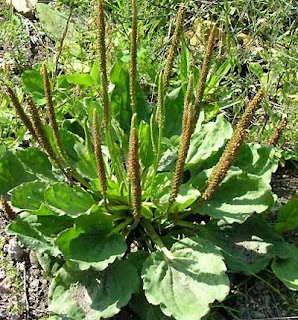 "I would often see hungry people lined up for free food at food banks. What they didn't know was that the yards, parks and vacant lots all around them were full of free fresh veggies"

This quote by Len McDougall continues to explain how plantain is as nutritionally sound as spinach, providing iron and both vitamins A and C. You don't have to cook it but it is typically consumed by boiling the leaves and treating it similar to spinach, with a little vinegar or butter for topping. This is especially true for full mature leaves which tend to be more stringy than the tender shoots. The seed pods may be eaten as you would green beans, according to McDougall. 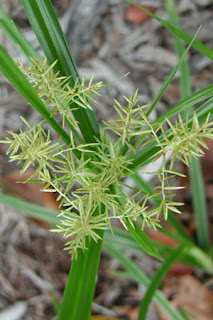 The same issue contains a discussion on Nutsedge, often referred to as nut grass, an invasive garden weed which is also quite edible with roots of the yellow nutsedge tasting similar to coconut and can be eaten raw, boiled or roasted-according to Mother Earth editors. One on-line discussion forum claims they are sold as tiger nuts in sweet shops.

I don't claim to eat these; however, I am glad to know the possibility exists. I can imagine that somewhere in the world an exclusive restaurant is serving this under some fancy name and charging a pretty penny for it. Otherwise, how can you explain the existance of escargot?

** I have had escargot and it's not bad.

Thanks for linking up, Kathy. I find chickweed more palatable than plantain for munching, although plantain is great for treating bites and stings. I'm not familiar with nutsedge, although the photo looks familiar.