A Little Under the Weather 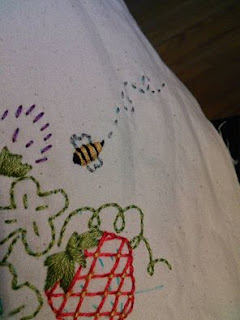 I was thinking that I haven't made any progress on
the projects I wanted to accomplish as pertain
to learning the old ways.  This summer has been
wet or I have been under the weather again,
fighting this colitis.  It's hard to get too
enthused when you don't feel well.

Instead, I thought I'd post some photos of the project I AM working on.
I really have enjoyed this quilting/embroidery project sponsored by
Moda,  Bee-utiful Quilt A Long with designs by Pamela Jane Morgan.
It has helped me to learn new embroidery stitches and to take
some creative license with the basic pattern.

You'll see some blue markings in the photos-
they was off but serve to outline the basic pattern,
each containing a bee or two. 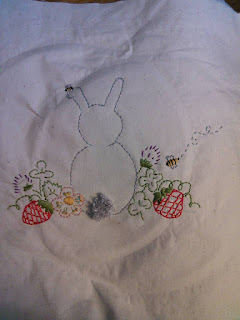 It's easy to sit in my recliner and stitch
and still spend time with my husband.

In the meantime I am working with
doctors, fighting their recommendation
to get on medicine with potential side effects
of brain infections or TB.  Another lists 3-4
types of cancer, one 100% fatal.

Maybe the odds are small but one brain infection
is enough to change everything.  I am going to consult
another doctor to see what the alternatives are.
We've only had these new biologics (you hear them on
tv all the time now) for awhile,
people managed before without them. 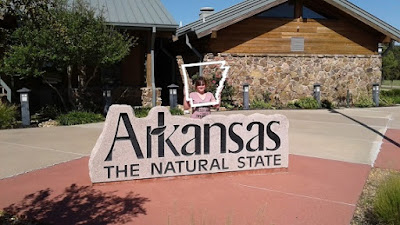 We were Arkansas bound, headed for Hot Springs
to visit my mom for a four day weekend.  We brought
our granddaughter along and took the required photo
at the Arkansas welcome center on Hwy 67 just after
the Missouri border.  This time the sweet ladies that
man the center gave her a cutout of Arkansas to hold up!

It's a long drive for us but we have made it so many
times that we have familiar landmarks which help
to make the trip shorter.  Additionally, it was good
to see they extended the four-lane section so we are
down to only about 30-40 miles of two-way! 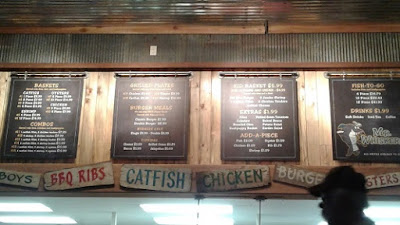 After resting a bit upon arrival, we made our way out to
Tom's favorite restaurant, Mr. Whiskers.  It's moved
locations, expanded the seating but was still so crowded
the line to order stretched down one whole side of the
seating area.  You had to estimate departures so you
can tell them To Go or Eat In!  He had fried oysters
with hush puppies and slaw.  Taylor had the kid meal,
mainly because it comes in a snazzy cardboard boat!
Mom had fish and shrimp and I chose ala carte since
I can't eat much these days.  Three shrimp and some
hush puppies were plenty, with some of those hush
puppies to take home! 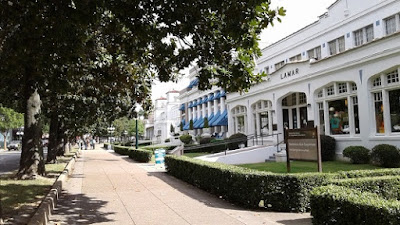 We made sure to go downtown the next day.
We dropped my husband and Taylor off while Mom
and I went to the quilt shop to pick up my
Row by Row that mom had purchased for me
but we still had to pick up.

Afterwards we met the hubby and Taylor downtown.
It was really nice except it's a small area and when you
add 10,000 motorcycles for a rally on top of tourists,
it was a bit deafening! 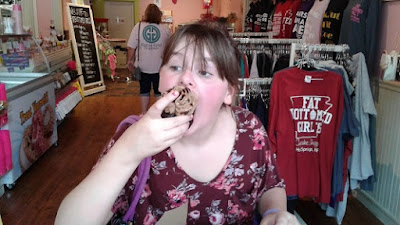 This is Fat Bottom'd Girls, a cupcake shop that won
on Cupcake Wars that Taylor watches.  She was simply
amazed last year when she saw her idols were right there!
She had to get a big chocolate cupcake this time.
By the looks of it, it was grand! 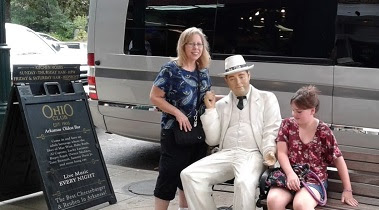 Taylor and I had our photo taken outside of the
Ohio club with Al Capone!! 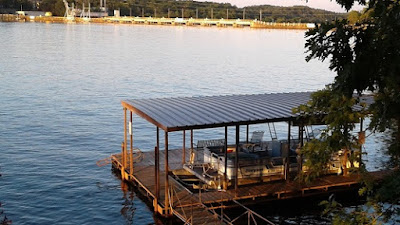 Mom owns the point so we have a great view plus
a lot of water frontage to swim. 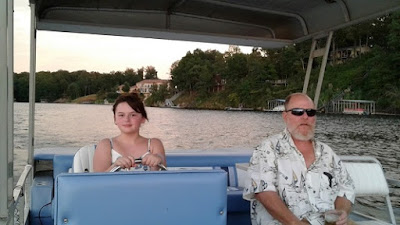 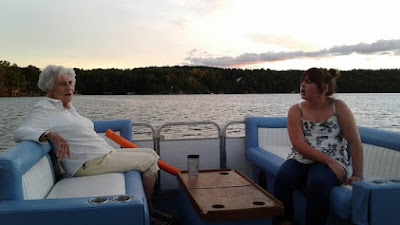 Taylor takes a break and sits with my mom
up front to enjoy the view. 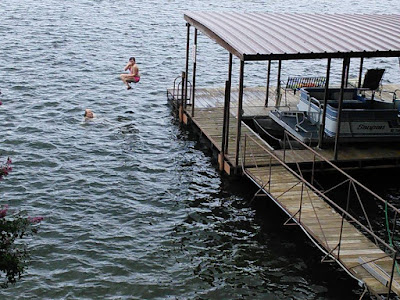 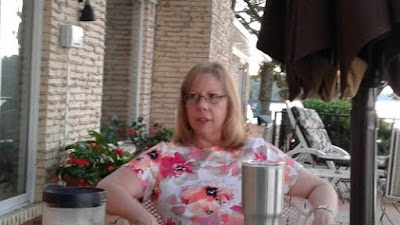 Relaxing on the deck. 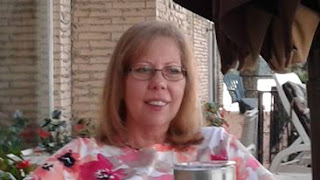 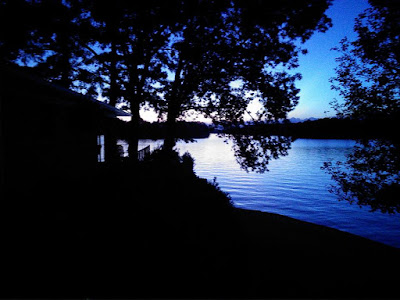 Our view as the sun sets. 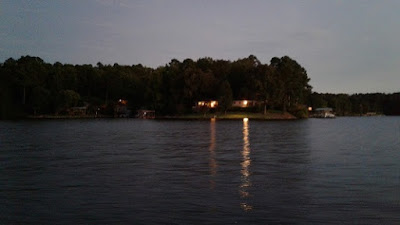 Mom's house from the water at dusk. 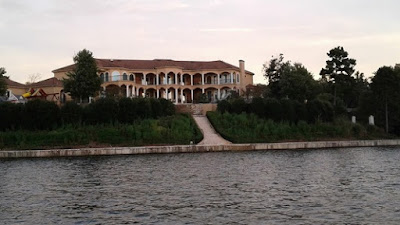 There are some tremendous houses on this lake.
This is mom's neighbor and yes, it's as big as it looks! 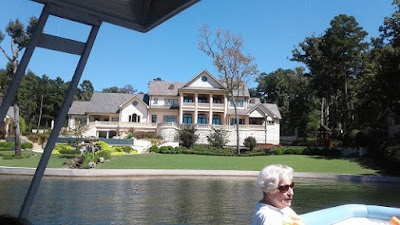 Another house down the lake. 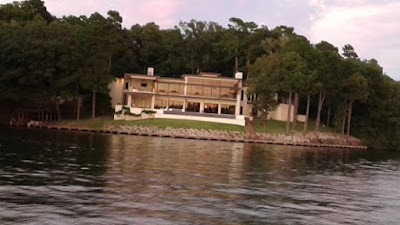 This one has an infinity swimming pool just before the lake.

Soon the weekend came to an end and we were packed up
and heading back to the St Louis area.
Now I need some time off to rest! 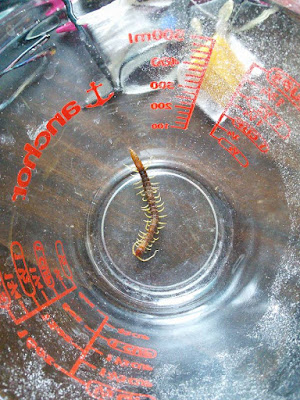 I needed help and help did not come!!! It was horrible, twisting and writhing across the basement floor and here I was trapped between the washer and IT. I yelled for help and my husband answered me, but not with the reply I expected.

No, abandoned in the basement with The Bug! And, it has pinchers. I was quiet for awhile, you would have thought he'd check on me, but no! What to do? Think, Kathy, what do you have here? I positioned a measuring cup and dust pan on either side and then scooped it up. Then I walked upstairs and showed it to him!!!! He didn't seem impressed. Neither did he seem impressed that I captured it ALIVE, with pinchers moving to boot!

I took it outside-where it belongs- and tossed it onto a large lump of grass. It's on its own now and finally, the basement is safe once more!