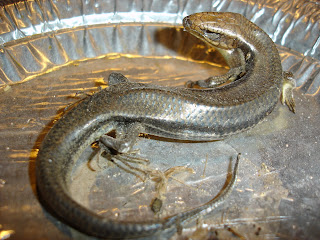 "Taylor, go finish your milk," I called to my granddaughter this morning. She hopped over to the breakfast bar where she left her half finished cup, climbed onto my counter height chair and let out a SCREAM!

We had to play this trick on her, it was just too much of a temptation. When we cleaned out the garage my husband left a pile of things for me to go through and determine if we should throw them out. One was a plastic pitcher, the kind you would make tea or lemonade in. I could tell something was inside so I took a look and found this poor lizard that had died and somehow was perfectly preserved. I had to save this! I knew Taylor would love it!

After running up the stairs, still screaming, she stopped, turned around and returned to the living room. She gingerly approached the breakfast bar and took another look at the little creature, all posed as if he was checking out something behind him. You see, as much of a girlie girl as she Wants you to believe, at heart she is the ultimate tomboy preferring to running, jumping, wrestling and taking dares as well as any boy. In fact, she has been know to beat boys a few years older in "wrestling" matches during our bonfires! 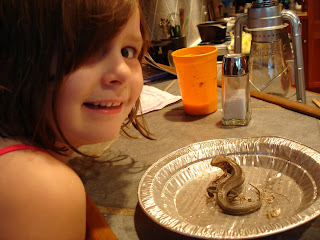 She has named her lizard, Denny- don't know why, but that's what she picked. We have a dried seahorse that I found in my grandmother's shell collection so I guess this will join it. We will pick up a clear plastic box so she can observe her lizard for awhile. She'll have a great time scaring her mom when she comes over to pick T up! While Taylor is a tomboy loving the frogs, bugs and various other critters, her mom is scared of EVERYTHING with the exception of a cat or dog. Even butterflies for some reason "freak her out" as if they were hiding gigantic teeth all folded up in their tiny little mouth. I side with Taylor.

I know some of you will find this gross and I'll admit we're a little weird at times. This is one.
Posted by Kathy Felsted Usher at 11:13 AM

Well Richard over a linenonthehedgrow blog has admitted to eating cats in the past, this weekend, so nothing can top that gross-wise! I don't think he wanted to, a Chinese host served it at a banquet!
Anway I would have screamed too!

We often wonder about the ingredients in the Chinese restaurants such as-- Tom Kah. Who do they think they're kidding. Just change a few letter, huh. Tom Kah = Tom Kat = Tom Cat perhaps????? Just joking- LOL. I'm not certain if I'd order cat but I have seen one cooked- a science experiment starting with a donor cadaver. Looks like chicken, didn't taste it. One restaurant was fined in Hot Springs, AR (where my mom lives) for having dead cats in the cooler. It was for their own personal use, but still must be against health regulations in Arkansas. Funny, and they eat opossum there.

That lizard had me fooled! I would have sworn it was alive. Who knew even lizards could be incorrupt :)

Speaking of slimy critters, I was at a guy's house in Smithton a couple of weeks ago and watched him shoot eight cottonmouths in back of the house by the lake. Actually, I think all of them were in the lake when he shot them except for one that was sunning himself on the rocky shore. The bigest one got away, and it was huge. John says he kills around fifteen every spring during mating season. They seldom come up near the house (the lake is about a hundred feet away), but I was still watching my feet everywhere I walked!

Hey, I just bought a little Energizer LED penlight (Hard Case Pro) for the glovebox. So far I really like it. It looks to be indestructible.

I think you meant "out."

That lizard is actually dead? It looks so alive. How did it stay preserved like that?

Your grandchild sounds like a wonderful little kid. I hope my Matthew has her spunk.

By the way, I haven't been able to log into blogger all week. Did this happen to you too?

The lizard is really dead. I can't imagine how it dried out, especially in that position. It looks like it should be a prop for some B movie.

I fixed the spelling error, thanks! Energizer has some fine lights. Everyone loves the one I blogged about. Taylor and her friend were throwing some of those popper fireworks that look like white paper Hershey's kisses. When they were done it was hard to see where they had been. We turned on the blue LED and Presto! There they were. It made the fire pit look like a black light poster!!

I can't do anything on Blogger, unless I use my husbands (new) laptop. I get to the log in page and fill in userID/password and then hit Enter. It takes me to a page not found error. Oh, it's Google Chrome and not Internet Explorer that works. I can't change the setting on my laptop to Chrome because it's really my company's so I can look at things or type on it but not download anything. We're on FB so we have permission to do minor social networking as long as we identify ourselves as company employees if we talk about Energizer, Schick or Playtex products.

Next time you're on FB, try to take a look and someone's "Notes" and tell me if you can see anything. I haven't been able to do that for the oast week either. The notes page is just blank.

I can see notes but again, it's on my husband's laptop using Chrome. I'll try to remember and get out my laptop from work sometime over the weekend.