Baja Rolls at El Agave, Cure for a Bad Day 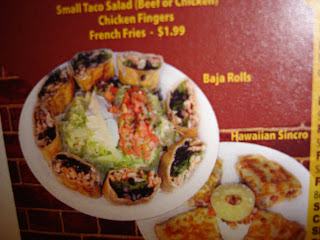 It was one of those days where everything goes wrong! Rainy, chilly,nagging headache and then the power went out-then immediately back on, except the computer was dead. We have a whole house surge protector plus the computer was plugged into a surge protector powerstrip but the quick on-off was just too much. It was old,barely working anyway, but we didn't want to invest in a new computer until we had to.

Yipes! There goes our stuff- except for what we had put on the external drive such as really important documents and photos. Really, there's not much there to worry about but we had to replace it since everything we do involves something on-line such as bill paying, banking and most importantly, pictures!

We take a visit to our local Best Buy and they have an inexpensive laptop for the right price plus I have a copy of Office that my company gives us for home use. Now we're set, except for the hours of setup, moving things around and explaing the super cool Windows 7 ribbon to my husband.

By now it's nearly 7 and we haven't eaten since breakfast. The head is pounding and I know I need to take aspirin, but I hate taking medicine and will resist until it does me in. I give in and take some aspirin. By 8 I have to eat but my head hurts too much to cook, plus it's late, so we get in the car and go to the little Mexican restaurant in town since it's about the one and only non fast food place anywhere near us.

I found headache relief through Baja Rolls. These are delicious- nothing like I would have ever thought I'd eat, since I'm picky when it comes to meat. Really, picky is saying it mildly.

They start with tortillas. Then they lay put in a filling of spinich, black beans, feta cheese, and grilled chicken cut into tiny pieces plus a little salsa. Then they fry it to a golden brown. It's cut into pieces and positioned in a ring around shredded lettuce and a chopped tomato-onion mixture. We get the white cheese dip to drizzel over them. It's a white cheddar with jalapenos and probably thinned with milk so it's warm and creamy. Taylor and I shared this plus brought back half for today.

We tucked Taylor into bed and she was out like a light!
Posted by Kathy Felsted Usher at 8:21 AM