Blue Pies, Smilin' at Me 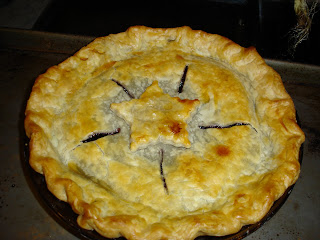 I made a PIE!! It's my favorite, a blueberry pie, something I never, ever get. I used to buy those Hostess blueberry pies but something happened and they're all gone. I don't know if they fell out of favor or if there was some type of blueberry incident that affected the supply.

I don't cook well but I can usually bake. I just get all flustered and frustrated when I can't follow the darned directions. Then there is the problem of doubling the recipe. I just measure twice rather than add those fractions. I don't do pies though.

I have pie pans from my grandmother because my husband is known to be a big storyteller, for lack of a better family oriented word. He told my grandmother that I love to bake pies, in fact it was my hobby. So guess what I got . . . pie pans. One's a pretty glass pan with ruffled edges which I suppose help form the crust, but since I don't bake pies I really wouldn't know. I didn't use it because it said it was a 9 1/2 pan and I needed a 9 inch. Little did I know that 9 1/2 would have been fine.

We're going to have this for tomorrow's family BBQ. I made the pie with Taylor's help plus I have a sausage enchilada dip which is served hot and made with cream cheese, mild sausage and spices. I have strawberries and grapes plus some apples that I'll slice for the kids so they can dip the slices into the personal sized tub of caramel dip I got for each of them. We'll probably doctor up some of those baked beans and pop them in the oven and maybe make a cold pasta side dish depending on what everyone else brings. Generally, everyone is bringing their own meat for the grill. Someone will surely have marshmallows for the fire pit.

I hope we get a dry day and those kids can finally try out the kites from Easter. If not, I'll give them some old cans and they can try catching a few more tadpoles that are swimming through the grass next to our culvert-- before it dries up too much.
Posted by Kathy Felsted Usher at 9:49 PM

You didn't use the pie pan with the lizard in it I hope? Your pie looks great.

Oh oh, where IS that lizard?

You're not going to believe this, but I've recently discovered the pecan pies I've ever had, and their sold by Walmart!

I don't know who makes them (I'm sure Walmart doesn't make any of their own). I think they just say something about the Walmart Bakery on them or something. Finally, something good AND cheap! Just $6 for the best 24-ounce pie I've ever had.

Wal-Mart and Sams do have some nice bakery items. If you're looking for a really good cake, and it's not cheap, McArthurs's Bakery has some of the best! http://www.mcarthurs.com/