My Amazing Cane and Deal of a Walker 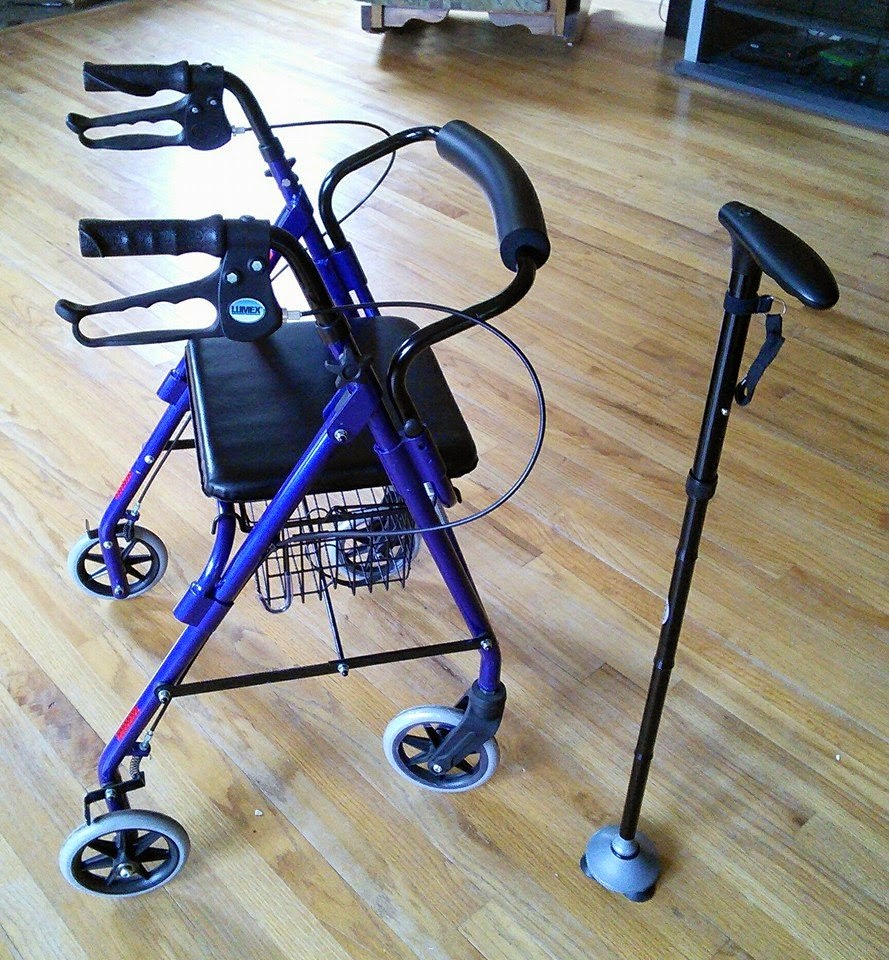 I was able to stand up the next morning after my Chicago injury
but the tables had turned.  I could stand up but could not bend my knee.
It was the better of the two situations because I could now meet
with the customer and, with help, get through the customer visit and
warehouse tour riding on their golf cart.  They could not have been nicer
and they just happened to sell the Trusty Cane which they promptly
gave me as a gift!  This was the only thing that allowed me
to get back to the airport, through the rental car return and into the
terminal where a most charming airport wheel chair escort made
certain that I was well taken care of.

I worked from home the next day and made an appointment with
the orthopedic doctor for Friday morning, bright and early.

The Results are In
(Drum roll)
No tears in my meniscus!!!!
Yea for me.

What did happen was complicated.
Due to a previous car accident my knee cap no longer sits exactly where it should
but rather is sort of kinked to the side.  Manageable in most situations.
The cartilage is OK in the front of my knee although there is a massive spur
on the top.  Behind my knee has very little cartilage left and when I pivoted
is somehow caused the ligaments to snap and either stretch or contract,
maybe both, resulting in a bad sprain.  From stepping into a car.

I have to use a walker instead of the cane for the next two weeks and
go back for a follow up.  I have the standard front wheeled walker that
was my Mother In Law's, the sort where you put tennis balls on the back legs.
That won't work for me, especially at work where I need to transport
and not drag the walker across their heavily carpeted floors.

We checked Walgreen's where a four wheel walker is $140, too high for me.
Then went to the medical supply to see what my insurance would pay.
It doesn't really work out well so I told them I would pass.
Then they brought out the dinged and dented model that was scratched
during transportation.  It is 100% functional but has some dings
which is fine with me.  The best part is that they would sell if for $50
which was OK with me.  The old metal ones are $90!

So now I have a Snazzy blue metallic walker complete with
brakes, a seat and a carrying basket that can sit below the seat
or attach to the front.  Perfect for carrying my lunch or bringing
print jobs back from the copier.  It is light weight and folds. 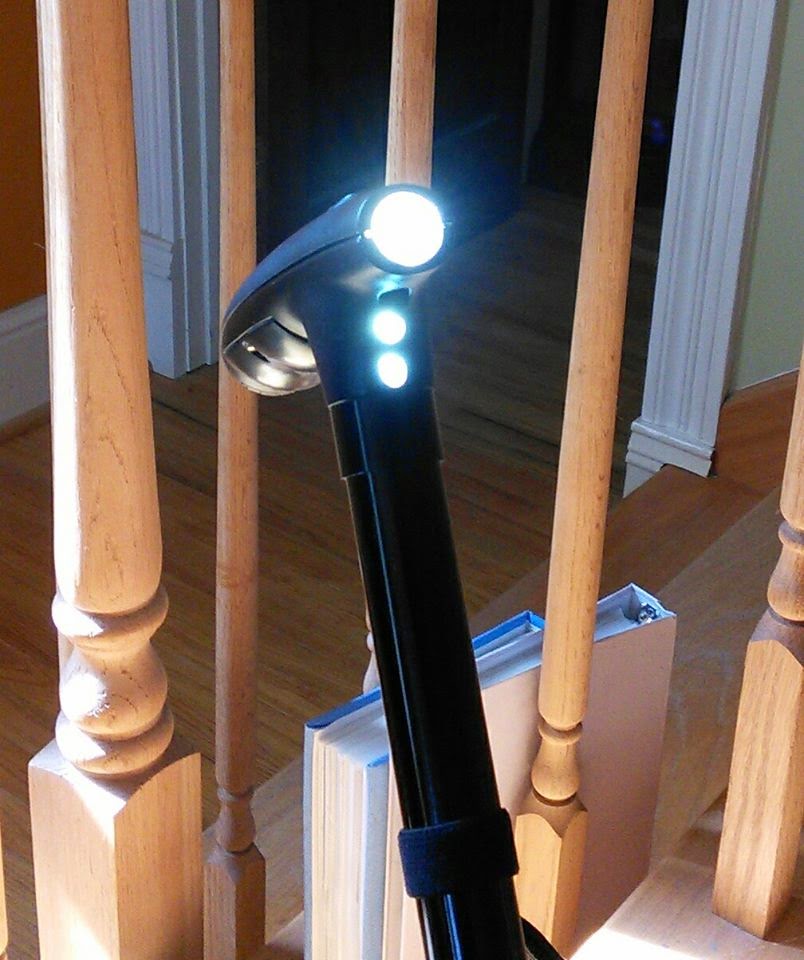 It is the TRUSTY CANE from As Seen On TV fame.
No joke, this is a great cane.  I've used canes in the past
that fall down and the bottom can slip out from under you.
I have no idea what they cost but through Bargains in a Box
in Chicago, it has to be value priced below the normal markets.

It stands up so you can balance it while you use both hands.
If the floor is not level, it may tip but for the most part it will stand. 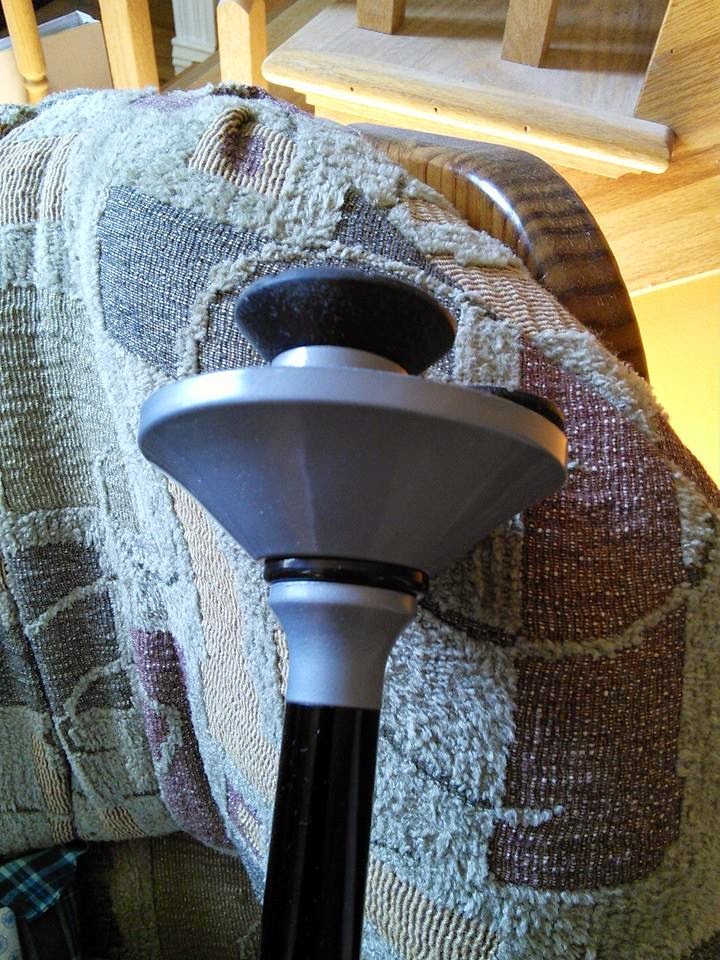 The tip swivels so it moves with you.
It even worked on grass. 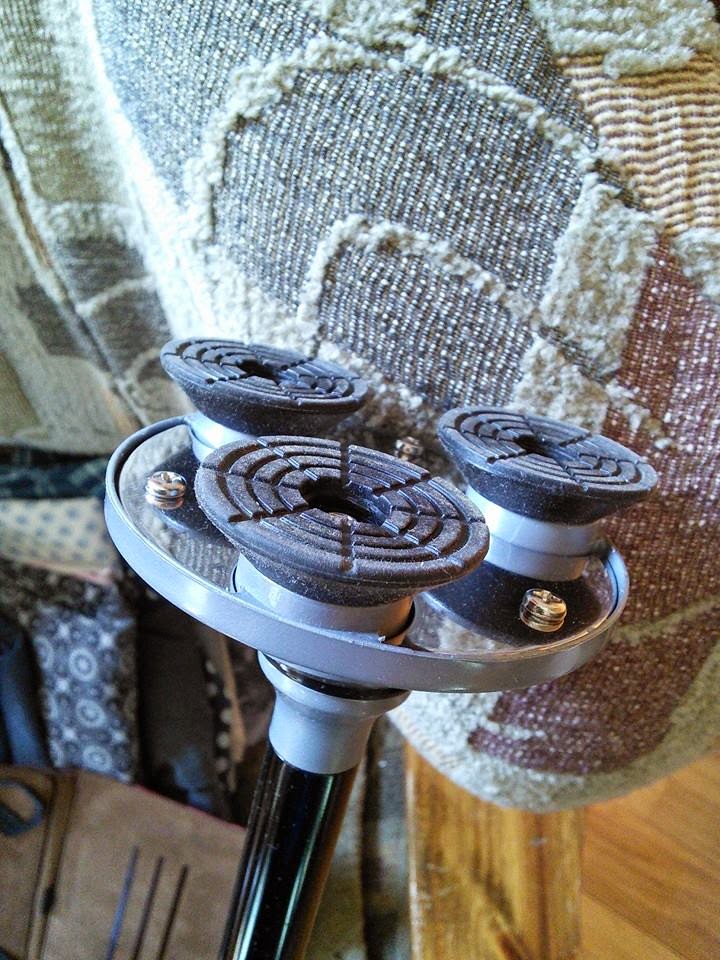 There are three bases under the single base to provide more stability.
As you can see in the first photo of it, it lights up when you push the button.
I wondered about this but if you need to go down the hall at night and
you don't want to turn on the overhead lights, push the button and your
path is now lit up.  It will stay lighted until you turn it off which allows
you to stand the cane up and continue to have light.
It could also light up your walk way or the key hole as you try to unlock
your door at night.

And there is more . . .   it collapses onto itself with a simple pull and
twist of the segments.  I did not do this since my flight was just an hour
but if I wanted to carry it in a tote, I could.

Tom will have to drive me to work for a couple of days until my
knee is strong enough for me to drive.  I would try it locally but
the area I work in is congested and under major construction with
lanes missing and temporary lanes in place where a highway,
major outer road and a university converge.  Too much for me!

So I have avoided surgery for now.
Thankfully.

Find more about the Trusty Cane at the link below.
Trusty Cane

Check out Bargains in a Box at the link below.
If you are anywhere near Chicago, go visit.
The majority of their inventory is from major suppliers
and prices are great.  They keep is plain and simple to reduce
costs so don't plan on finding fancy shelving or expensive decor.
That only increases the cost for me and you.

Bargains in a Box

Disclaimer:
My company requires I tell you that I have a relationship with this customer
as I have mentioned in the posts.  That being said, this is the sort of place,
as regular readers know, that I LOVE, LOVE, LOVE, even without our products
being in there.  I have no connection to Trusty Cane or As Seen on TV.
Those opinions are strictly my own.

Posted by Kathy Felsted Usher at 8:53 AM

I'm glad you avoided the knife and found a couple things to make your life easier for now. I hope you heal quickly.

Take care and let yourself heal. Use your new tools too. Glad you found a good walker and cane. - Margy

Kathy!
So this is GOOD NEWS! I'm glad you avoided the knife also. That just doesn't sound fun. Well, heck...none of it sounds fun.
I can't get over the fact they had a cane for you...and a good one!
Crazy thing about the insurance and the push cart/walker.
I'm pretty fed up with the insurance scams of today. Sorry-- but you know what I mean.
anyway... hope you continue to heal as time allows. Don't over do it.

Oh no! What happened? I'll have to go back a few posts to see. That is a great cane.