I Can Do It Too - Cheddar Cheese Biscuits 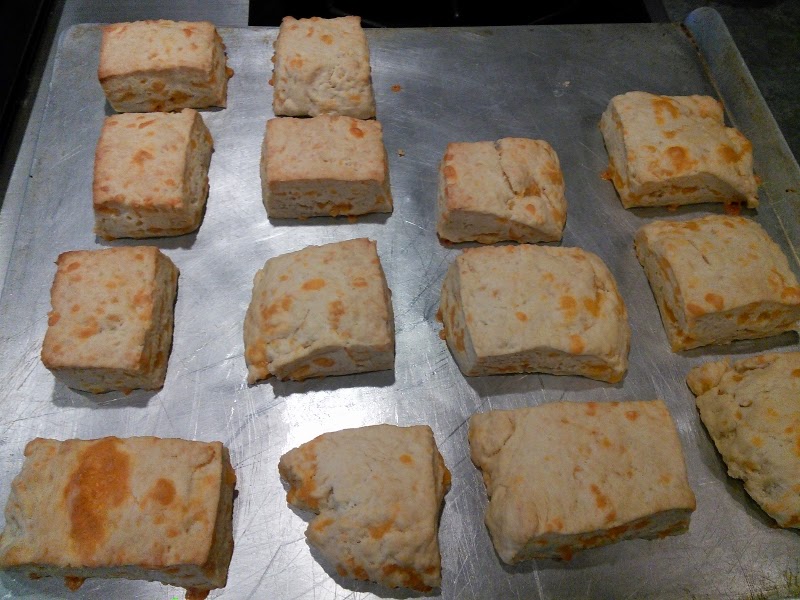 I saw the recipe for Cheddar Cheese Biscuits in the
same issue of The Backwoodsman in which I
found my emergency lighting.  I decided I would try
and make these as well. 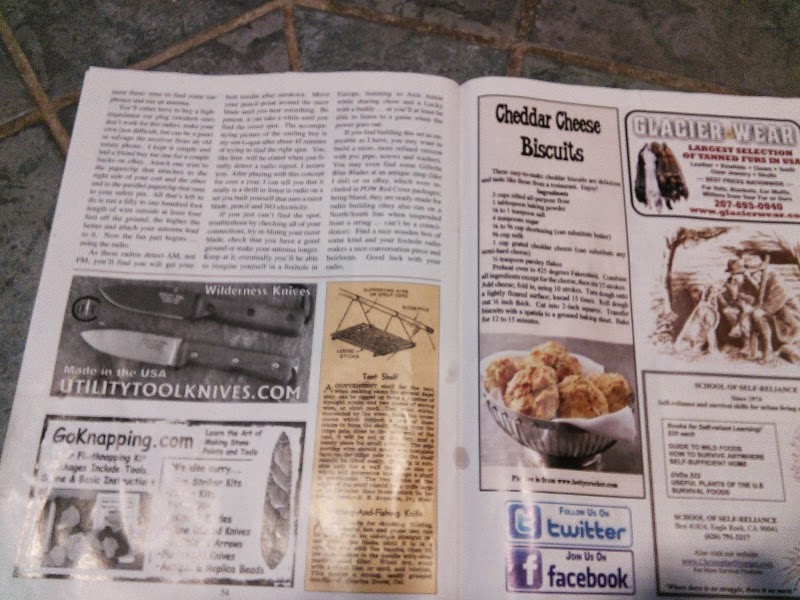 They have a photo in the magazine that is attributed
to Betty Crocker and not the same shape as they call
for in the instructions. I will say that the Betty Croker
photo is much more appealing than the the final product.
They call for cutting them into 2 inch squares.

These were OK.  My issue with the recipe is that
the measurements for the ingredients were ambiguous.
For someone that does not bake often, that's tragic.
They gave ranges of 1/3 to 1 tsp salt.
This could be 2/3 tsp salt less, which is a big difference.
They also ranged from 1/2 to 2/3 cup shortening,
again, a pretty big difference.

I really don't find them very tasty, perhaps due to salt
especially since our butter is not very salty.
If I add salt, they are better but, for me, not
worth making again so I won't bother with the recipe.

My husband liked them but says they would be better
baked with lard.  He says shortening adds a bitterness to them.
I will say h says it tastes just like a campfire biscuit
so these may be a win at the campfire,
but no so much in my kitchen.


Posted by Kathy Felsted Usher at 4:57 AM

Not sure what the recipe calls for, but I make something very similar, but using a homemade "Bisquick" recipe, but then add garlic salt, shredded cheddar cheese and cooked crumbled sausage. I make them like drop biscuits and they're a meal in themselves!

PS-although I am now guilty of same, I used to HATE it when I came across ambiguous measurements in recipes....drove me NUTS :)

I always use butter in my biscuits, gives them great flavor. Sometimes the recipes are keepers and sometimes not so much. ;)

I don't like ambiguous recipes for the same reason as you.
I doubt we would make them twice, either.

Cheddar does seem to help even the most mediocre of biscuits:)

Reminds me of an old cookbook I bought (a reprint) from the early 1900s. The ingredients and directions were very vague and basic. But it was fun to read and think about the women doing the cooking and baking mostly from memory. - Margy

Carolyn's recipe sounds better!
Candy- that is what my husband said too.
I like cheddar- sharp cheddar!
We have some fun old recipe books too. We picked one up that is Civil War military recipes and another that was slave cooking in the South. All very interesting.

Cheddar biscuits sound good...but I'm no good with recipes when it comes to guessing either.
I'd probably skip it. ;)

Real Lard is the best thing but it is so difficult to get unless you can render your own.
My mother made a very similar biscuit and said never make them without lard but then we had our own lard from our own livestock way back when!

Hi Fiona! I should try again with lard. We have some fat in the freezer we need to render because we are out. I will say the chickens have been loving them. My husband brought them down in a zip lock bag and keep them with the feed. They get all excited when he throws a couple in the coop and a couple in the yard.