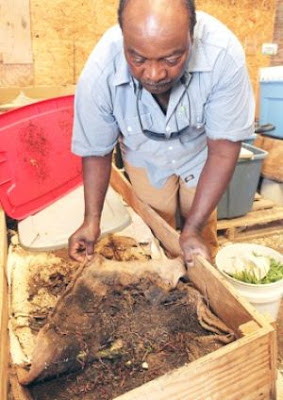 I met Kenn White at our local gas station sometime last year.  We struck up a conversation when I saw the the sign on his van indicating he is a worm farmer, something I don't see just any old day.  I took his card but got busy with one thing or another until I ran into him again yesterday, at the same gas station, while he was packing up his flats of home grown peaches while his little dog rested in the shade of a large umbrella next to his table. As it turns out he not only specializes in natural and organic soil amendments but also sells a variety of organically grown produce ranging from vegetables to fruit.

I introduced myself again and we chatted for a while about his peaches, what he feeds his worms and projects he hopes to be involved.  As we discussed the various charitable organizations that might take leftover fresh produce (many only want canned items) we discovered we basically belong to the same church!  Our priest is in charge of two churches, both of which we may (and do) attend.  This  gives us the option of one Saturday night Mass or two times on Sunday morning.

He does  not yet have a worm farm website for Nighttrain Gardens and Worm Farm but he did point me in the direction of an article that our local paper had about him and the Eisenia fetida worms he raises- link below to both the article and photo.

I would love to see more community gardens, a community kitchen for the public to can, dehydrate and bake produce into tasty treats (donating a portion to the food banks),  school gardening projects, and public sustainability projects.
I think Kenn would be a great fit!

We have a lot of worms in the garden but I usually only see them in the spring when they come to the surface at night. Guess that is why they call them night crawlers. They are very interesting and must like all of the organic material that I turn under, probably loose soil to crawl through. I never thought about farming them though.

I have a neighbor who sold "worm tea" at farmers market for a year or two. I thought it was funny at first. Now that I have a garden, I think it's cool.
Smiles,

We've got a "Worm Guy" at the Farmer's Market. Sells worm poop. How neat.

Good to get connected with other like-minded people, never know who you'll meet and where!

I've long been interested in worm farming, have even bought two books on the subject, but have yet to actually order worms.

We have an organization in Houston that teaches classes on the subject and gets community gardens started at various public places like schools. I really admire their work.

Believe it or not I have checked into how to raise worms....but I haven't taken the leap yet....:) Thanks for the post...now you have me thinking about it again...:)

Carolyn- I just had to add, the gas station is the big place in "town" We have 3 churches, 2 bars, a gas station that also sells hot food and a Dollar General. That's it aside from a used car dealer or body shop so if you're going to meet someone it would probably be the gas station! LOL