Rooting Around and Starting Over 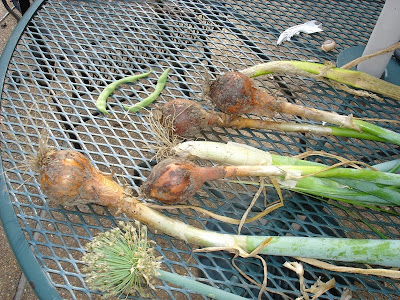 It's a bust - we're starting over.
I salvaged some onions and a few green beans
but the big garden was a failure.
We had a wet, sloppy, cold Spring
followed by a sudden burst of the 90's
and no rain.  The garden weeds had grown out
of control and then amazingly, everything wilted.
The squash bugs are in check but we find we
have an infestation of what I think are flea beetles
on the squash (acorn, not the pumpkins).
On top of it I've felt terrible for three weeks,
doing better now but I wasn't up to gardening. 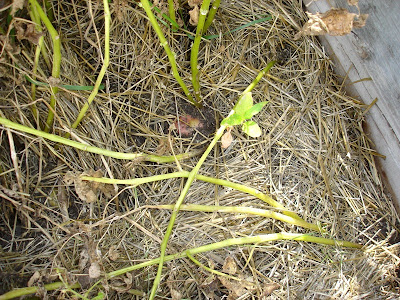 There's a  potato peeking through the straw
which is hopefully a good sign that more lie beneath. 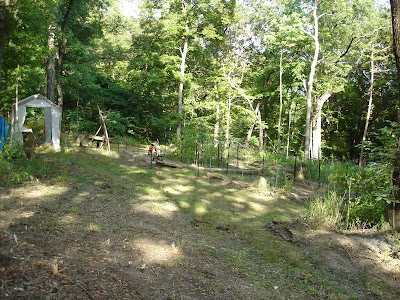 So the hubby took to the garden with the tractor
and the tiller, cutting weeds and mixing in the spent
straw from the coop then we watered it down well.
It's difficult to tell but there are three beds across (one unplanted)
and one  narrower bed across the bottom of the three.
This is where we typically have the pumpkins and
additional squash such as zucchini and yellow squash. 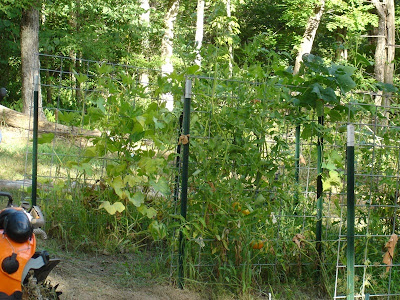 There are still some tomatoes which appear to be OK
but the acorn squash is suffering as did the butternut squash.
He mowed down the artichokes that had dried up but
avoided the sage, zinnias and onions so they are salvageable.

The Fall garden should be much better!
I hope.

Sorry about your garden, that's a bummer. :(

The rain has messed up some of our stuff but a lot of our garden has a slope so it wasn't bothered too bad, the tomatoes in a flat area didn't do well at all. All you can do is dig it up when it dries and plant fall crops. Next year it will be too dry probably.

Oh how sad. I hope your fall/winter garden does better. It's so exciting when you get to eat out of your own garden.
Good luck,
Lady Locust

Hi, it's too bad about your garden. Our plants didn't do very well either. All we had in spring were a few in raised beds because it rained so much the garden area didn't dry out enough to get a spring planting in. We hope to get a fall garden planted soon. Hope yours does well.

Thank you for visiting my blog and leaving a comment. I looked up your oil lamp here on your blog - It's a beauty! I've never seen one like it. Have a great weekend!

"It's so exciting when you get to eat out of your own garden."

I think it's even better when you find stuff growing in the wild that nobody but God himself planted like wild onions and strawberries. We used to eat wild onions that grew in our front yard very year when I was a kid. We never planted them. They just always showed up.

I wish truffles grew in the Midwest. I would love to dig for truffles sometime.

Weeds won here, too, and I don't have any excuses other than I had no idea what amount of work would be involved; and that I have never done good with heat.

Oh, and we planted way more than we could handle.

We've plowed up the corn because hubby got tired of the raccoon damage, and the rain and heat got to the tomatoes. The bell peppers mostly rotted before they ripened. Now the heat and rain (and weeds) seem to be killing the watermelon.

Ah well. It's a learning curve.

You have a lovely place there. Good luck with your fall garden!

I admire your persistence, Kathy. Here's hoping your fall garden is abundant.

Yahoo- I would really like to find a good foraging class and have asked my conservation department to think about adding it to their educational programs with walks where the plants can be identified ( example--so you don't think you're eating purslane and select spurge instead) Iknow some of the edibles and have seen color plates but I'd like to have some training. I know there's lots to be eaten out there.

I would like to learn more about foraging too. All my grandparents knew about wild plants, and I knew a little when I was a kid but have forgotten most of it now.

sorry to hear about your summer garden. you just never know how things will go each year. I was starting to think about my fall garden and what I want seedlings I want to start soon. I can't believe July is almost over.