Rooster Tales- No Longer King of the Coop 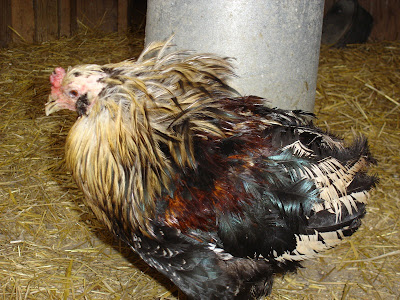 What goes around comes around.
That's all that you can say, someone had to win.
In this case, Mr. King of the Coop
is now Mr. Where's My Tail? 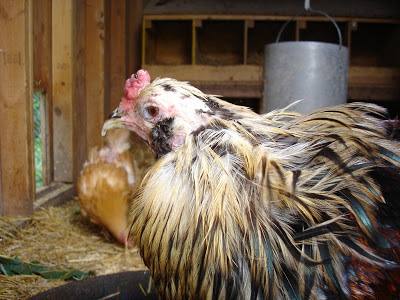 If you'd been nicer, maybe Rooster the Younger
wouldn't have hit his breaking point.
Maybe he wouldn't have done whatever he did
to break your spirit.
Now you hide in the coop beneath the nesting boxes,
head to the wall.  It's so pathetic.
I shouldn't feel sorry for you,
I witnessed how you treated the young guy.
Now the girls are his and you have your corner.
I'll throw you some treats out of pity. 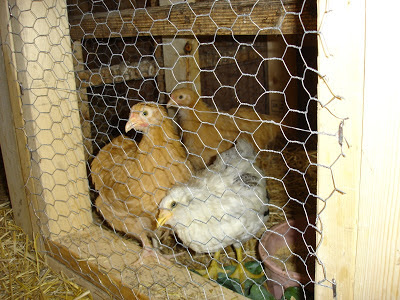 The newbies are watching all of this too.
(Where did the white one come from???
I don't have white chickens.)

The problem of having two roosters -
We kept the younger one because the older one was never fertile
or so we thought.  We seem to have a chick in each batch
that isn't completely a buff so who knows!
The older one is was a bully.  He ruled the yard, the younger ruled the coop
but then something terrible must have happened.

The older one is completely broken.


Posted by Kathy Felsted Usher at 8:51 AM

SO are the days of our chickens' lives..lol..it is so hard to see them go about what their instinct tells them to do. I find myself interfering when mine fight and then it hits me..crazy girl that is what they do and have to do...sorry about the king but know what you mean...thanks for sharing.

I've said that for quite some time now, I never liked that rooster much. He was aggressive from day 1, I had to hold him by his feet, upside down, and tell him I will NOT take him trying to attack me. It seems to help if you establish yourself as the Alpha bird, actually my husband is since he puts them up at night (due to lack of steps into the coop and I am only 5' 2" ). I must be Beta bird . LOL

I feel kind of sorry for him. I can't help it. I know he was a bully, but he looks so sad.

We have had similar events happen in chicken land. I try to keep the most friendly rooster which often doesn't set well for the aggressive ones. Now we have one very old rooster who looks the worse for wear but still feels like crowing.

The old rooster is no longer with us. The younger one beat him so badly that he wouldn't even move and must have had serious internal injuries as well as the obvious external ones. In the end, he had to be put out of his misery.