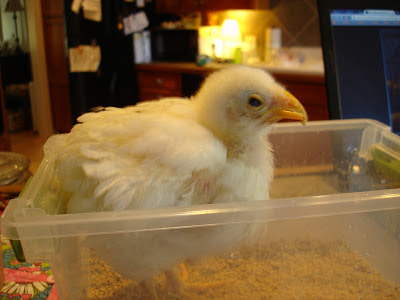 Bird is still with us!
He's (she's) about six or seven weeks old now
but barely larger than the new hatchlings
which are about three weeks old now.

For those that are not familiar with Bird,
I found him at a farm supply store and took him home
since he was unable to compete with the normally formed birds.
He is missing an eye- maybe it never formed,
his skull is deformed, bill crossed and
feathers are developing strangely and
sparse or completely missing in places.
He has frequent seizures where it hurls itself backwards
almost collapsing into himself and shakes his head
until he comes out of it. Sometimes it helps to hold
him tightly and call out to him.
The one eye that he has is blind so he needs a lot of help. 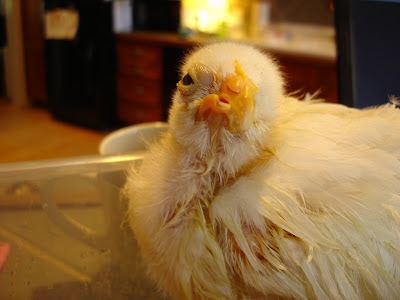 He eats in a small tub, pecking until he has his fill
(actually we don't know if it's a he or she) .
I have to give him water with an eye dropper
because even though he is able to drink a bit
out of the regular water container he has
trouble finding it due to being blind plus
whatever is affecting his brain makes things difficult
for him.  I know he may look somewhat gruesome
but he is just adorable as I hold him and he
reaches up his head for water drops.

Since he can hear, I am trying to train him
to know that when I say "Drink" that means to
expect water to drip into his beak. I know
he still wants more if he sticks out his little tongue
and he's finished when he shakes his head.

While I was on vacation I stopped at the vet and
he showed me how to trim the beak when it gets too long
plus how to stop the bleeding if we accidentally nick the
blood vessel. A coating of flour will work or
anything to clot the blood.  He was the hit
of the office, everyone stopped what they were
doing to see why a chicken was a patient
and when they laid eyes on him, they got even
more interested.  The most interested ones were
the patients- the feline variety.  Boy did their eyes get
big watching my chicken chirping and hopping in
his clear plastic tubby!

You can see he is missing the other eye completely. 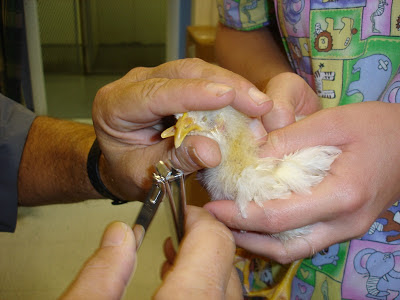 The vet said the chick could live for quite some time
since it's been getting good care.  He may become a house chicken
which would be OK since we have no other inside animals
and if he remains small I can easily keep him contained.

He needs company though. I will need to hatch a couple more
eggs so he has some.  The last batch must have imprinted
on him since they think he is their mother.  It's funny how
they run to him and hide beneath what little wings he has.
I'm sure he'd be lonely in a tub all day long without anyone else.

Well there's the update.
I've been a little under the weather so posting is minimal
but I hope everything is going well for you all.

What an amazing drive that little guy (or gal) has. Such a little sweety, I can see why you are so attached to him...or her.

All I can say is that you must have one heck of a mother instinct! :-)

What a good chicken mom you are! I think Bird is definitely going to become a house pet! :)

I have never really named him yet thinking that he wouldn't be around long but now he knows he is Bird so I can't change it. My husband keeps calling him Cletus.

My heart certainly goes out to him. Maybe you can name him/her Helen as in Helen Keller. Hope you feel better. Summer colds or any illness stinks.

Perhaps you could find some calm, older bantam type for company?
Really good to see that (s)he is doing so well. Congratulations! :-)

He/She definitely needs some company. I don't want anything that is old enough to fly- and it scares me that he will soon try and start crashing into things! I guess we'd have to clip wings at that point but since they are not developing normally maybe that won't be a problem.

Manny- thanks, I'll keep that in mind for when we figure out if it is a girl or boy. I hope girl.

I don't suppose you would ever consider eating her when she grows-up, would you? I mean, given all her health issues and skin growths I don't think I'd be comfortable eating a chicken like that. No telling what kind of diseases she might have.

Odin would be a good name if it's a rooster. He traded one of his eyes for a drink from Mimir’s Well in order to attain the wisdom of the ages.

There is unfortunately no one eyed female with a story nearly as good. I guess you could name her after Sandy Duncan.

Yahoo-
No, I won't eat him/her although originally planned as a meat bird.
Odin would be good
Sandy Duncan- you are terrible!! Poor Sandy!

How about Jane
One-Eyed Jane - is a fictional pirate from the Wicked Travels of One-Eyed Jane - a saga of epic proportions that begins in London's merchant district with the pretty, naive lass Jane Spiess, and ends twenty years later in Mandalay with a black-hearted, murderous, and extremely rich, One-Eyed Jane.
http://en.wikipedia.org/wiki/List_of_fictional_pirates

One-Eyed-Jane is good too. Hadn't heard of that one.

You could also name him Columbo!

And then Sammy Davis had one eye. Maybe Sandy if it's a girl and Sammy if it's a boy.

You may have to teach this bird to sing and dance though. You might start a new career as a chicken choreographer!