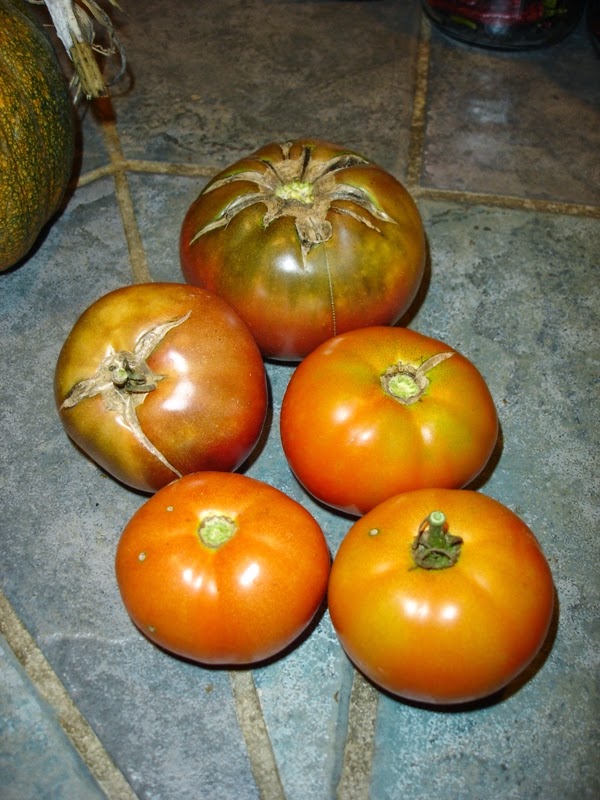 We're down to the last of the harvest.
There are a couple of green tomatoes still on the vine
that might produce a few more red ones, but there isn't
really enough to put the energy into it.  We canned
plenty of sauce and have dehydrated quite a few. 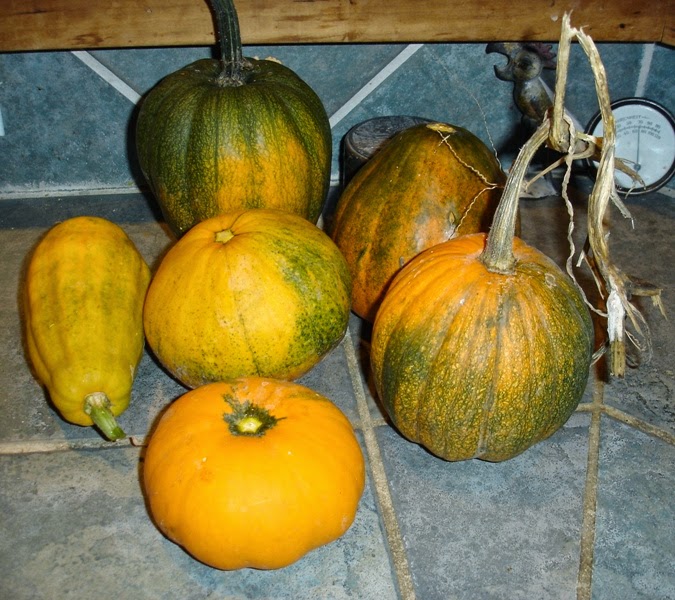 My pumpkins didn't do well this year due to a couple of factors.

First, we let the kids smash last year's pumpkins and scatter
the seeds, just for fun.  I think every seed took!
I should have thinned them out but wanted to see what nature
would do on it's own.  I had a lot of pumpkins starting,
and the vines spread out of the garden and wind down
through the woods so who knows what else I will find.

Secondly, I have had to be out of town a lot.
Squash bugs will get out of control unless I remove
eggs daily by pressing duct tape to the leaves.
Early in the season I was well ahead of the game,
even the ants seemed to be eating the eggs and I had
very few to remove.  Spiders perched on the leaves of
my zucchini, yellow squash and pumpkins so I think they
were enjoying whatever happened to hatch.
I'd find an adult or two but they didn't last long either.

Then I left for week and everything decided to hatch
at once!  I couldn't ask my poor husband to do everything
plus go squash bug hunting!
(Which,  by the way, I seem to taken an inordinate pleasure in)
When I returned they were everywhere.

The adults lounged on leaves,
lounged on each other,
basked in the sunlight having little squash bug BBQs,
probably a few brews too.

I took desperate measures and sprayed them-
Yes, I did.  I sprayed them.
They loved it.
I think they inhaled- deeply.
And continued to multiply
and conquer.

I really don't care, I had so many squash that I was
feeding them to the chickens, who I swear managed
to smile toothy grins at the carpet of squash in their pen.
Never mind that they don't have teeth or can grin.
They did.

The only concern I have is that the bugs are going to overwinter
buried deep in the ground where I can't get to them.
That means even more next year so I decided that I will starve them out.
No squash for a year.
Well, maybe one plant in some other area, but none in the garden. 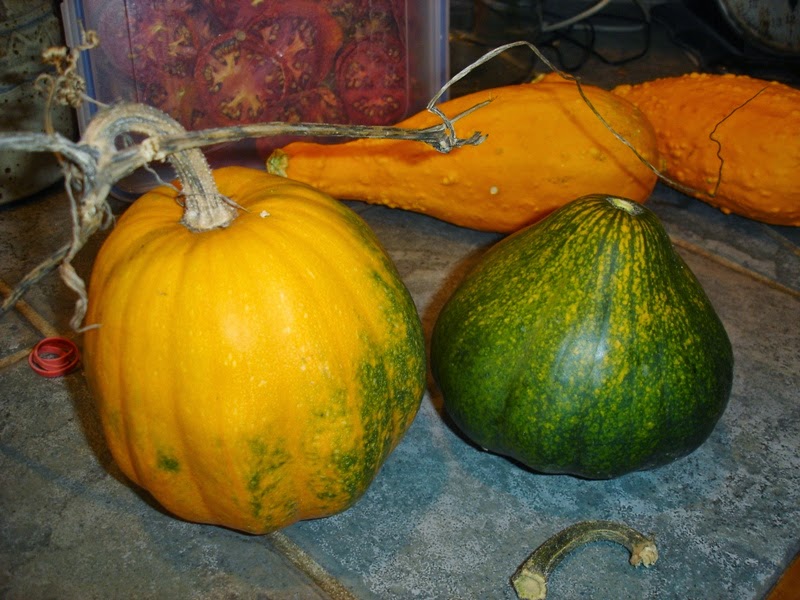 I'll see what these little guys do,
the two in front are pumpkins and are continuing to turn orange.
They will make either cute decorations, maybe cupcakes
or more chicken feed (the chicks vote for feed).
Taylor might vote for the cupcakes!


Posted by Kathy Felsted Usher at 5:22 AM

Our squash and pumpkins are ready for harvest but some vines are still going strong. I think that bugs like summer squash the best and tend to leave some varieties of pumpkins alone so I try and grow the ones they don't like. I save the seed from the best ones and maybe that helps.

They are a natural de-wormer for chickens, too, right?
I know what you mean about bugs. Ugh! They always win in the end.
Have a wonderful day!

Did you ever hear Guy Clark sing Homegrown Tomatoes? It's a hoot!

I'm down to my final tomatoes. After that, only my kale and chard will carry me into the winter. - Margy