Help Wash Away My Problems 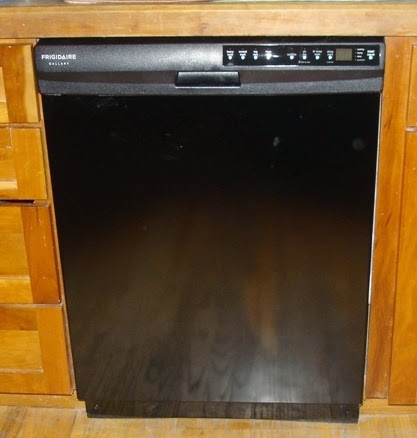 We are not destined to have a dishwasher.
Until 2001, appliances worked well for us, rarely a problem
unless it was user error (No, you can't put corn husks
down a garbage disposal!)  Well, you can but it is
a lot of work getting them out again.

Then we moved into a newly built house
which means all new appliances
that failed one by one, much earlier than anticipated.
Much earlier!

Jenn Air dual ovens - the display went out
( I  set the temperature and listen for the Ding
then have a grocery store wind up timer)
Jenn Air range with flat grill- auto light went out
on the grill so I have to light it with a bbq lighter.
Refrigerator- really nice one with whistles and bells. Broken
Refrigerator #2- cheapest model I could find.  Works so far
but the service guys that put on the handles tightened them
so much that the handle broke!  I gave up, let it dangle.
Dishwasher #1-  motor fell apart, the service tech said
he'd never seen anything like it- out of warranty of course.
Dishwasher #2- Bosch, beautiful and quiet.  All of the models
before ours were recalled.  Ours was a month after the recall
models even though we had the same symptoms.  Out of
warranty of course.  They could start switching out parts but
couldn't say what part was bad so we might pay as much to
experiment with it than a new dishwasher costs.

No new dishwasher.
I was through, done.

In reading Consumer Reports, I found that appliances,
regardless of price, no longer had that service life that
we experienced growing up.  In fact, none really made it
10 years although some were thousands of dollars.
And here our 1950s refrigerator sits just cooling away in the garage.
I remember my grandmother's side by side  Kelvinator  (Foodarama?) which would
hold enough food for 4 families, ran for decades.
Why can't I even get 5 years out of an appliance?
The only thing that has not broken is the trash compactor!

We hand washed dishes for the last three years
and then took the plunge when we found a deal on a
new model that someone ordered but backed out of.
My husband installed it and like Magic,
you could place your dishes into this big, black box,
push a button and they came out clean!!!

Except the glasses.
Oh, they were clean but coated in a cloudy film.
I tried liquid detergent, powdered detergent, hot water
and cooler water but nothing seems to help.
I  essentially wash the dishes before putting them into
the dishwasher. I don't put in pots and pans, mostly
plates, silverware and glasses plus  a couple of bowls.

We have well water and use a softener.
We use a rinse agent- which is a required lubricant for our model.
I have suggestions of using vinegar in the bottom of the washer,
opening the door when the cycle is through (if I am right there),
adding a secondary rinse agent that helps with cloudiness.

Any other suggestions?
I can't have people drinking out of these glasses
and what is the point of the dishwasher if I can't wash
my glasses, that part fills up first between water, milk and coffee!

Let me know what you think.
Posted by Kathy Felsted Usher at 5:28 AM

Last year I stored my canning jars in the dishwasher (as they emptied) until it would hold no more. The only time we really use it is during the holidays when we have lots of company, but "Jet dry" was the one recommended to me & seems to work fine.

Well, you've been given or found any suggestion I could make. Our water in North Carolina and here does the same. It's got to do with mineral content, I believe.
The only suggestion I could make, you probably won't like. Dry the glasses in front of a small fan.
I've found that works for clear plastics so I believe it would work for glass.
I quit using a dishwasher years ago. Sometimes I miss it; but when you're retired time isn't so important. :-)
Good luck!

"Planned Obsolescence" google it.
Or "The Lightulb Conspiracy"

It makes my frugal blood boil!
I just wash my dishes by hand. I've only had one dishwasher that worked and still did not use it.
I just sold my GENTLY USED 10+ yr old dryer, because it was taking up space and had only a few miles on it. I've always hung out my laundry. So why have one?
I bought an ice crusher/blender-- and paid for a $5 replacement warranty. I got it replaced after 7 mos. I broke while crushing ice!!
Thing is it had an ice crushing setting on it. $60
I replaced it with a blender.
Because I bought a 1950 ice crusher for $3 at the flea market...works like a charm!
They just DON'T MAKE THINGS LIKE THEY USED TO.
I wish I still had my 'garage fridge' it was a 1950(?) Sears Coldspot. We sold it with the house-- the guy was stoked about having a beer fridge. The thing is-- we were using it in the KITCHEN!

I just do my dishes in a little plastic tub in the sink. I rarely have more than one pot, one cup, 1 set of silverware, and a plate so it's cheaper and faster.

We have a dishwasher, but the ferrets chewed up the rubber gasket underneath it, and I haven't been able to find a dishwasher that was affordable after I pay to have it delivered way out here.

I had a GE dishwasher that lasted us 23 years, and it was a few years old when we moved in. It never gave us an once of trouble. It still hadn't broken down, but when we just remodeled our kitchen over the summer we decided to go with a new one. Our new one is a Whirlpool and its very quiet. It's only a month old. No problems and it's very quiet.

""Planned Obsolescence" google it.
Or "The Lightulb Conspiracy""

Amen! It's all too true. I own a window cleaning company, and I can tell you for a fact that they purposely make windows with poor glues on the seals or not enough silicon in-between the window panes (it keeps them dry and fogless) so that they'll break down and be fogged up in 5 to 7 years usually. Of course they only warrant the windows for 3 to 5 years, so they make out like bandits selling you new windows every ten years or so. When I first started in the business 21 years ago, Anderson and Peach Tree among others gave you a 10 to 20 year warranty, and their windows really did last well over 20 years.