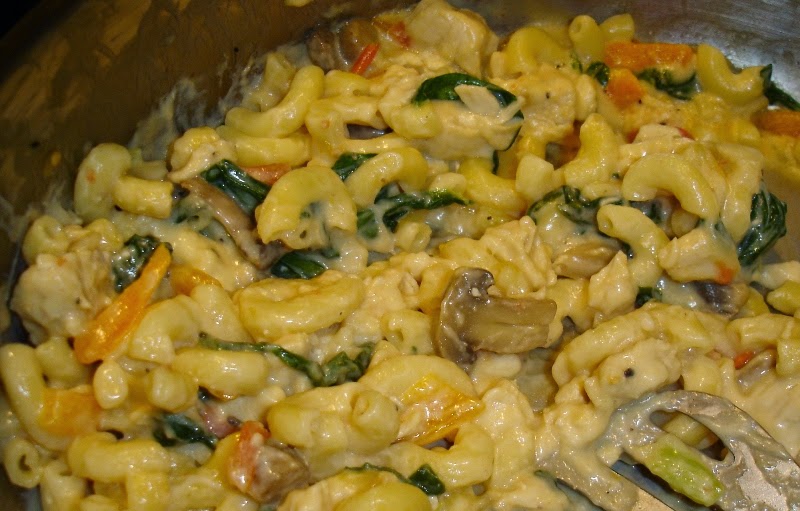 A macaroni bar!
The office cafe often prepares personalized entrees that
are really fantastic- but a bit pricey!

They recently added a macaroni bar where you select the
ingredients to be combined with whatever noodles you choose.
They use small skillets to quickly stir fry your choices and
then add the sauce of your choice plus cheeses.  In no time
flat you have a specialized meal.
So why not do it at home?

I placed the chicken and vegetables into a buttered skillet
and cooked until the spinach was wilted.
I used Montreal Steak seasoning rather than the chicken
because I wanted more pepper in it.

I added the noodles and let them heat a little.
I then added the Alfredo sauce and continued to stir.
At the last minute I added the cheeses until they melted.
Since we like the same things I did not personalize this
but it would be easy to do using a second small skillet
or quickly wiping the skillet clean.

With precooking chicken, enough for two meals,I saved a lot of time.
I doubled what I needed and used half of the chicken
for quesadillas the night before.  I sprinkled taco seasoning,
did a quick stir fry in bacon grease to add additional flavor
and mixed it with my cheeses before cooking
them on the flat grill.

I was not sure if my husband would like the macaroni bar
but he went back for seconds so I think it was a winner!


Posted by Kathy Felsted Usher at 5:14 AM

Sounds like a good idea, always nice to have new options for supper.

And there was hardly a foul word to be heard, too! And only one or two pots thrown! All in all a successful cooking night for Kathy!

I made a macaroni salad this week with fresh carrots and frozen peas.
We ate it for lunch and dinner...and actually had some a 3rd day. I added chicken to it and it made a nice change for lunch!
A macaroni bar sounds nice...
I served baked potato bar for The Honey's 60th birthday... it was a 'mashed hit!
:)

Oh yum! I love all things macaroni, well all things pasta! lol.. This picture really has my mouth watering!

Seconds are a sure sign or a success. I have been cooking large casseroles for a friend who's wife went through bypass surgery. She did all the cooking, and now can't. A macaroni bar would be a good idea for them, except their son would say, "where's the beef?" - Margy

Yum! That would be a great lunch. I usually make a sandwich, it's too far to go to town unless I can work in several chores on the same trip.