The Queen is Dead, God Save the Queen 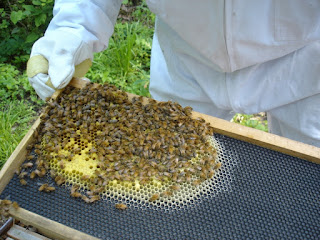 With great regret I have to announce that we committed regicide
over the weekend, only out of necessity to maintain the lives
of the colony.  The two original hives, from package bees,
were not progressing as well as our other two, one being much more
weak than the other.  While the bees on the frame above were
working to fill up their frame, the other hive had barely begun
and it was a mess.  The comb was bumpy and had tunnels in it,
not the norm, completely dysfunctional. 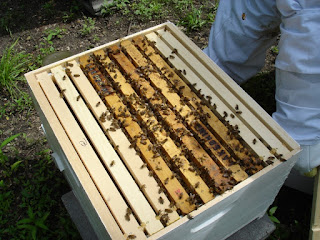 We visited a bee mentor who operates a beekeeper shop
near the city and she recommended that we combine the
weaker hives in order to make one good hive, otherwise
our queen, being weak, endangers the entire hive and
they would not survive.  To do this is a little tricky. 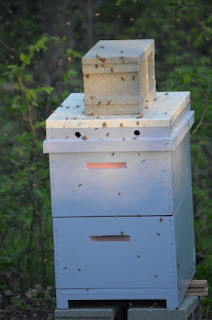 In this example, the bees live in the two big boxes where they
raise the new bees and make winter food storage.

On top of the two big boxes (deeps) we would stack
smaller boxes (shallows) where the excess honey is stored.
That is the part we get to harvest if the bees make enough this year.

We had to move the big box, where the weak hive is, on top
of these two big boxes.  We put a sheet of newspaper between
the bottom layers and the new deep on top.  You cut a couple
of slits in the paper and since the bees on top cannot get out,
they eat their way through the paper down to the deeps below
where the entrance/exit is.  It takes time to do this so they get
used to the new bees and hopefully everyone gets along.

Here is the tricky part.
You can't have two Queens.  It would be a battle to the death
between them so we had to kill the weak queen.

We took out frames until we found her, and she is quite obvious,
really large.  Then we had to peel back the comb since she kept
hiding under the tunnels.  All the while, the bees see that we are
after their queen, and they are not happy about it.

When we found her we had to pinch her to death.
I apologized, " I am so sorry Your Majesty."
We used the bee hive tool and then ground her into the dirt so the
bees would not still have her smell.

Sadly, this is the queen that my husband saved when they first
absconded when setting up the hive.  It was necessary though.
We'll check back to see how they are doing and hopefully we
will save this hive.  The other two, purchased as colonies (nucs)
are doing well and we had to add the shallows since they are
building up nicely.

Posted by Kathy Felsted Usher at 5:39 AM

To take care of the honey bee is very difficult. But honey taste good. It is difficult to get fresh and good honey.

Such things are always a bit tricky. I hope it works out well.

Good luck with the mixing!

All of this Bee work sounds challenging. You have a wonderful talent and a knack for it , it sounds like to me.
I'm reading through some of your posts I've missed. And saw the paper where it looks like this is a success!