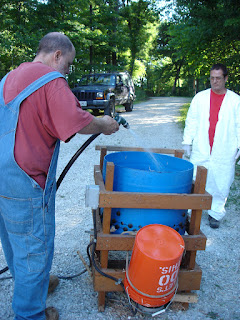 Today we processed our first meat chickens.
I wasn't sure what to expect, having never cleaned
a chicken before.  We studied up and watched some
You Tube videos before undertaking the task.
It went quite well and I was surprised that it
didn't bother me, I thought it might.


We had one thing on our side, my husband's boss
built a whiz bang chicken plucker and it takes a
lot of time off the job! 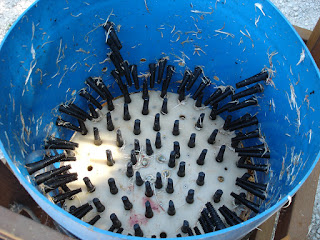 The whiz bang has many rubber fingers inside that
spin like a dryer, plucking all the feathers after
you put in already scalded chicken.  You have to drop in two
at a time and within seconds they are plucked. 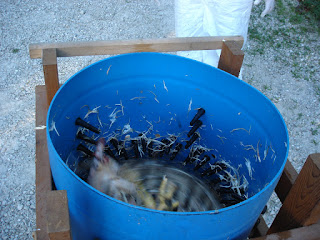 You can see how fast it moves. 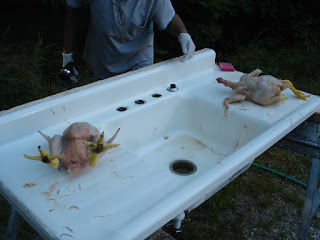 We have an old farm sink with drain boards that we
set up on saw horses.  We snaked our garden hose through
the faucet opening and added a garden hose sprayer on the end.
Beneath, we attached a drain hose so it would all run through
the sink and down the hill away from the house. 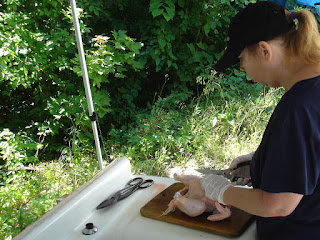 Then the guys brought them over to the sink for us
and we washed, gutted and cleaned them.
We started out doing our own chickens but then
each of us had something we preferred to do.
I ended up being the chicken gutter, my friend Laura
was really good at cutting out the backbone and
up the breasts.  My husband and Dennis took care
of the chopping plus put them through the whiz bang. 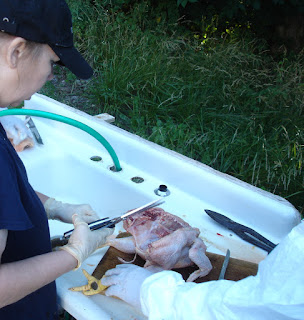 The poultry shears were just a bit much for me.
I don't have the hand spread in order to open up
and close down on the portion that will cut through bone.
I was much better at cleaning them out.
We had buckets to collect everything we were not using
and an iced chest to keep all the meat in. 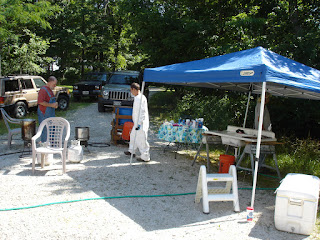 We had about 26 birds to process and, being our first time,
took us several hours to complete.  We had shade most of the
time but put up an awning to keep the area cool.

We have a lot of meat in that cooler, which is now
in the garage with lots of bags of ice.  We'll package it all
up in vacuum bags and place them in the freezer.

This was our first experience with Cornish Cross,
or Creepy Meats!  Never again.
We restricted food so they didn't get as big as those
that are allowed to eat as much as they want,
and they always want to eat.
If you do this, they tend to have problems with
their legs or hearts.  We would rather have them a
little smaller and feel better.

If we do this again next year, it will probably be with
Buff Orpingtons.  We like them better. These cornish cross
just ate, pooped and sat down.  They walked around a little
but not like our other birds.

After we were done, my husband asked what
I would like for dinner tonight,
Anything But Chicken
I replied!

Fantastic post. Really enjoyed learning the process and Your last line was so funny!

Oh my goodness! You did it! I'm so proud of you.

Timely post, we were just discussing the whos and whens of our first processing experience. Also concluded that we'd not be comfortable with the 'creepy" chickens, for the same reasons you cite. Any particular you tube that you found most useful?

Amazing, that thing really works. I just skin the bird as I usually have tough roosters and end up mincing and canning them. That plucker would be the trick if I had some nice birds to cook whole or cut in pieces.

I don't know, our friends pulled up the YouTube videos on their phone before we started working. I would imagine they just Googled how to butcher backyard chickens. There was one with step by step video. I was particularly interested in how NOT to cut the intestines. It's pretty easy once you do it a time or two; however, remember not to feed before butchering to reduce any waste.

That is great. I have seen those pluckers. Hoping by the time we have chickens, we will have one, too!

This is where you can order the instructions, it's a booklet, if he is still selling them. Otherwise Sunnybrook, let me know if you can't find it.

From the blog: Then I self-published 100 copies of a 60-page plucker plan book that told and showed other backyard and small-farm poultry producers how to easily make their own Whizbang Plucker.

I don't know anything about gutting and plucking them, but actually cutting them into parts is a whole lot easier if you have a freezer you can set them in for an hour or two before cutting them up. A firm chicken is much easier to cut than a sloppy one.

I've never seen a meat cutter use sheers before. All you need is a good sharp 6" boning knife with a curved edge. Some nylon glove liners will help you hold on to that greasy chicken too. Once you get your speed down, a year from now you'll be cutting up a firm chicken in 20 to 30 seconds.

You can get a decent Forschner made by Victorinox for $21 at Amazon.

Yahoo, do you debone them or does the boning knife cut through the bone?

A good sharp boning knife will even cut right through the backbone very easily. But if I wanted to debone the breast for instance, a boning knife will also help with that. Getting all the ribs out is tough. I always made a small hole at the top of each one so the bones would stick out and then just used my fingers to work the skin down off the bones and kind of yanked them out a few at a time. There's no easy way to debone a breast unfortunately.

If you get a boning knife, also get a nice 3-sided sharpening block and a steel, and learn to use them. A sharp boning knife is your best friend if you want to cut meat. The hardest part is training your mind NOT to try and catch one when you drop it, because you WILL drop them from time to time, and it's most natural thing in the world to try and catch something before it hits the floor when you drop it. You'll learn after the first few Band-Aids.

Well, Yahoo, I see meat cutters and carpenters share a common "don't catch it" attitude. We have the same issues - if it falls it's bound to have a whirring blade, a sharp edge, splinters or nails sticking out of it. When something goes over the edge we all step back and watch it crash to the ground. At least we hope it's going to the ground and not onto a finished surface or through a windshield!

Maybe this explains why you never see any ball players who are cabinet making hobbyists. Oh the dichotomy....

We have a Whiz Bang chicken pluckier, and it works great! Very good post! Thanks for sharing on the Homesteader hop!