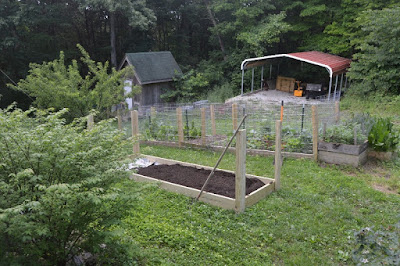 We are sitting on five acres of mostly wooded land
on top of a very rocky ridge top.  It is the sort of
place that I would describe to my in-town friends as

that is until our county road got paved a few years ago.
We still sit on a gravel road and enjoy everything that
comes with it:  listening to the crunch of tires as
cars pass by, the never ending dust requiring me to
wash the front of the house and we won't even mention
the windows.  You see, if God wants me to have clean
windows, He will make it rain!
(inside too!) 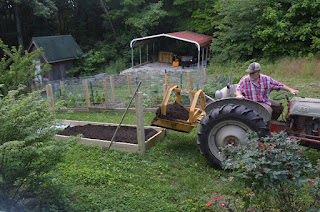 That being said, you can imagine how difficult it is
to plant a garden when we can barely get a
T-post in the ground; therefore, we build up.
We started with the large garden on the other
side of the house, chopping down trees and
clearing as much as we could.  Then we built up
soil by layering organic material, the lasagna gardening
method.  This would be leaves, clippings, manure,
compost and the like.  It took a few years but now
the dirt is so good that you don't even need a trowel
to plant, just brush the soil aside, just like I used to
see on the Victory Garden PBS shows and never believed.
Well, it's true! 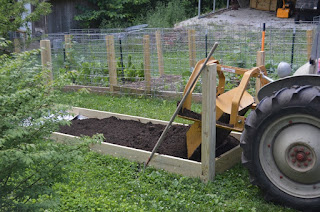 A lot of our compost came from the horse farm up the way.
They replaced their entire riding ring so it's a mixture of
horse poop, gravel and mulch.  We brought dump beds
full of it home, the pile was about five feet tall,
if not taller, and very wide.  We use it in the garden,
on our courtyard flower garden wall when planting
new flowers plus it's the dirt we use for any new bed.

We started a side garden, closer to the house, for salad
items and then transitioning to beans, a few cucumbers
and a couple of tomatoes for good measure.  The larger
garden had the same but also squash and tomatillos and
whatever else we liked such as pumpkins.  The side
garden is so convenient that we decided to expand it,
adding yet another bed.  We don't "play" in our side yard.
We have the entire courtyard plus covered porches for
relaxing.  Then if we need flat ground, the front yard will do. 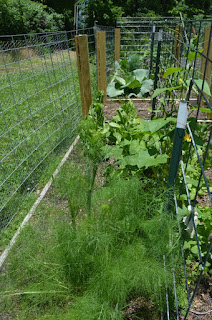 My husband tilled up a space, leaving room for the
tractor between beds and the bushes on the side of
our house.  He built boxes and added stakes for
fencing it off from the deer that like to eat their fill.
Then he used the tractor and filled the scoop with that
fine, fine dirt that we still have a huge pile of. 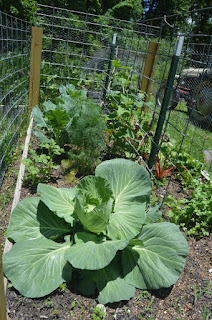 I laid down newspaper as a weed barrier and he dumped
the dirt inside the box while I raked it across and down.
We overfilled and will let it rest before planting. 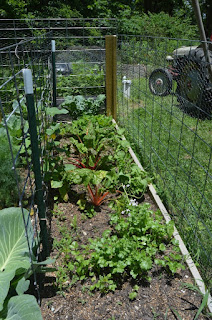 So far we have horseradish and potatoes,
kale and collards
dill, cabbage, cilantro, radish,
swiss chard and a lovely violet that I
didn't want to kill. 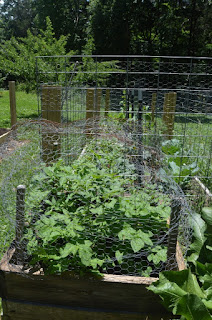 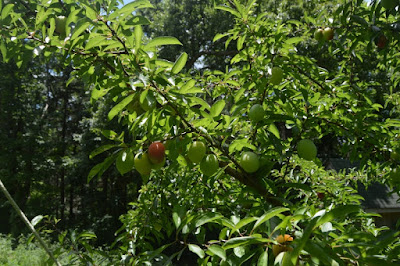 The poor wormy plum tree is especially loaded this year.
They are not really turning red, it's the diseased wormy ones. 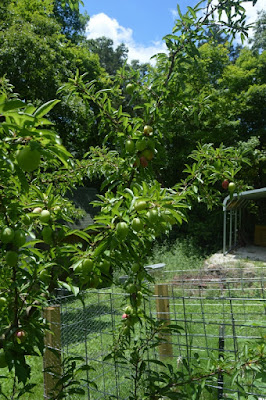 It's so full that the branches are hanging down!

We plan to make every spare area something that will produce.
This is why we have the laying hens, the meat birds and the bees,
a peach tree and plum tree (regardless of how poor they are)
plus blackberry and an elderberry bush.  The guy up the county
road has planted a veritable orchard of elderberry varieties,
if you call it an orchard.  I'm sure our bees are visiting and
pollinating ours with all his varieties!

The bees took my pumpkin area so we may move them between the
end of the large garden and the hives but will need to keep them
trained well so they don't spread all over creation.

My husband wants to raise rabbits
(yes, for eating)
but I said no, not the pretty bunnies.
I suggested he may want to consider wart hogs instead

Well,  we have butchering day on Saturday, with temperatures
in the 90s!!!  Then the following weekend we help our friends
who will be assisting us this weekend.   They also raise meat goats
but I'm not ready for livestock, at least not while I am working.

For now, it's late and I have to clean up and get ready for bed.
Let me hear about your gardens!

Oh how I love your gardens and I too have always wanted that rich soil like on Victory Garden! So glad you have it! You two make some wonderful things happen on your property.

Use rabbit tractors and STAY AWAY FROM THEM and let your hubby handle things! lol

For some reason I had thought you were on a smaller, more urban plot. Everything looks picture perfect, especially that garden soil!!

Kathy your garden is looking great. Deer ate my cabbage plants. They were looking so good and gone in one day. I think you are ahead of us. We are a little cooler/higher etc but it's sure nice to see things growing.

We are about 10 miles from a small town and 20 minutes from Six Flags in St Louis which is still the county and more subdivisions than anything else. It's about 30-40 minutes to get into what I would consider urban yet still not "downtown" St Louis. I work in town though.

Bunnies- I don't think I could stay away, I'd sneak them out and play with them.

Sorry about the cabbage!! We really have only one head, normally they are devoured by worms. If it works this year we will plant more and make kraut.

I'll tell you, that Lasagna method of making soil works. Start now and in a year or two you will have great soil. Based on where you live, it looks like you have access to cow and horse manure.

What beautiful beds. That soil does indeed look so rich. Thank you for joining us at Thoughts of Home on Thursday.

We were out staking up tomatoes this morning before it got too hot. Why do tomato bushes get so big they fall over? How'd nature make that work? :-<

I think tomatoes naturally spread on the ground like pumpkins but they stay nicer when staked. I've let them sprawl before and they were fine except for when they got too wet or bugs got to them. We stake ours, the tomatillos too. I've let pumpkins grow up cattle panels, the sugar baby variety, not the huge carving pumpkins.