What Bee Happening in the Garden? 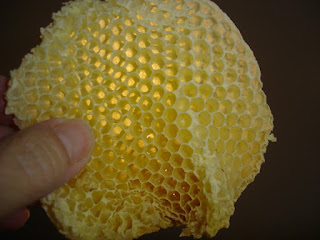 Wow, the bees that we purchased locally just a week ago
are sure more active than the package bees we brought home.
This was not a good situation but they worked so hard
in just a week that they started running out of room in the
hive box.  When this happens they start building what is
called Burr Comb which is comb built outside of what
is efficient- on top of our frames in this situation. 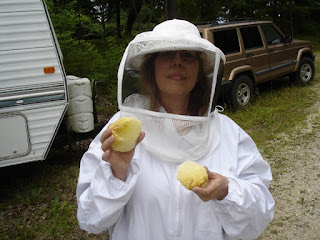 It's not tragic, we just had to remove it and put in
additional frames so they can build as they are supposed
to.  If there are gaps, they will fill it themselves.
To be efficient, they need their frames so nothing is wasted.

Yeah, my suit is huge.  My veil and helmet is not really zipped
closed in this photo.  We started unzipping since the
suits were hot and we were outside the bee area.
Not that my hat fits well, in fact it does not; however,
it normally sits well on my head.  Of course I also
would have my gloves on too. 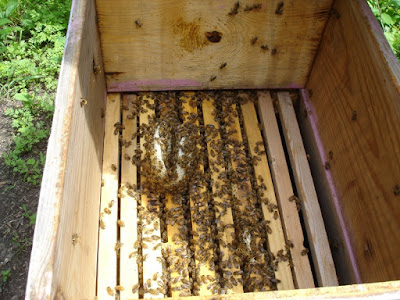 This is the burr comb we found.
We smoked the bees to get them down into the frames,
removed the burr comb (two larger pieces and a small third) and brushed
the bees off before quickly placing the frames and
the hive top.  We made sure to remove the burr comb
to a place that would not attract robber bees or predators.
Now we know how fast this new group is we will keep up. 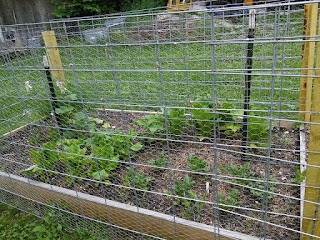 Our side garden, mostly salad items, is doing very well.
There are two raised beds, one with a variety of lettuce
and spinach plus we started cucumbers since the lettuce
days will soon be over as the heat ramps up.  So far
we have had rain, rain and more rain.
We have some volunteer beans and tomatoes coming up too.
The tomatoes will need to be moved but the beans will
be OK growing with the cucumbers.

The large garden is not doing as well due to this,
the peppers are slow but the tomatillos seem to be
doing a bit of growing.  I just added squash as well. 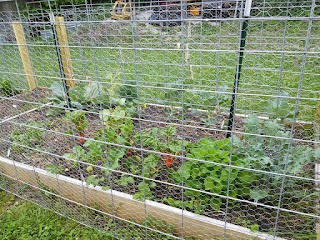 The other side garden has radish, kale, collards,
cabbage, cilantro and swiss chard.  Not shown
are the other two beds:  horseradish and potatoes.
We are adding another bed next to this and yet another
to plant the asparagus in.

I've also added to the flowers:
a mountain mint that is well behaved and grows in a clump,
blanket flower, milkweed, black eyed Susan and other
Grow Native perennials.  All for the bees and butterflies of course.

We had some family and friends over yesterday so today, Monday,
was a yard work day for us.  I weed whipped, watered, pulled
weeds, worked bees and did an entire day of laundry!
I also had to cut back brush and unwind the honeysuckle
that insists on twisting around anything it can.

I also had to empty out the old turtle sand box
(Taylor is now 11 and probably can't remember the last
time she played with it).  It filled with water and leaves
when the top blew off so I bailed out water until I
could tip it up.  I am certain it is a breeding ground for
mosquitos, as is our poor broken garden wall pond which
we need to pull out and replace- before the frogs get
in it next year.  I love the tadpoles and won't hurt them.
I'll get some of those discs that are OK for amphibians bu
sill the mosquito larve.

My husband was busy cutting our yard and the lot
next door plus tilling up some of the ground for
the new bed.  It's a big job and we had a great break
before the next round of rains this week.

Well, enough for today.
Maybe it will be good to go back to work so I can rest!

Wow. You make me tired!
Congratulations on the new bees being so busy. ^_^
Have a blessed week!

It's interesting to read about your bees. You have lots going on in your garden. I had volunteer tomatoes this year, but I'm guessing they are cherry ones. I only kept three and added three regular sized tomato varieties to go with them. That will be more than we can eat so I plan to use my new canner to save some for winter. Last year I made tomato sauce out of the cherry ones so they all didn't go to waste. It was a lot of work, but made me feel better than wasting them. - Margy

The bees do take more care than I had anticipated but it's been very interesting so far. As they become more established we won't have to do so much.

This is going to bee.... a great adventure. Much learning. I am even learning. I didn't know about robber bees or Burr combs. Great post.

This is all so exciting and neat! I just love what you are doing with the bees. You are styling in that suit! :)

Happy Thoughts of Home on Thursday.