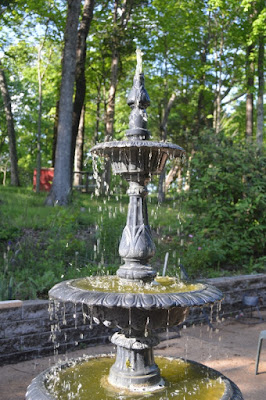 What can you see as you look to the left of our fountain?
It's a wonderful thing, well, maybe our neighbors won't think so
but it will only be there for a few weeks. 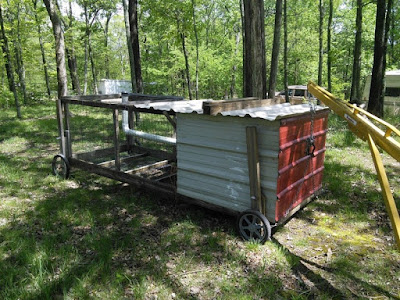 I am sure a few of them are wondering.
You see, it's the only flat spot we have.
What is it?
A Chicken Tractor!!!
THE CREEPY MEATS ARE OUT OF THE HOUSE!!!
(you might hear a band playing or imagine confetti floating in the sky)

The awful smell is gone.
The twice daily litter cleaning, gone.
All out in the tractor.

They will stay locked up in the coop area for a few days
to get them used to the new food and water location and
then we'll let them out to peck around in the grass and
run around looking for bugs and the like. You can raise and lower
the wheels so it is elevated or flat on the ground.
The entire thing is a cage so nothing can get in or out.

My husband's boss loaned it to us so we don't have to make
a coop addition yet. 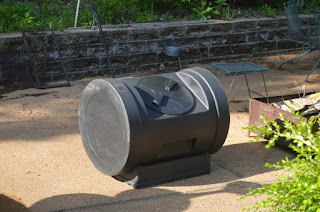 We also have a compost barrel now.  The compost
pile is pretty far from the house, up by the garden
and wasn't easy to access to throw away the daily egg
shells and vegetable scraps.  This one will sit closer to the house. 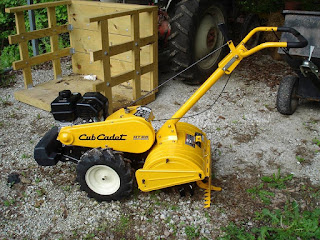 We had to bit the bullet and get a new tiller.
The old one isn't working and since we didn't have
a garden last year due to the rains, it has
completely covered itself in grasses.
We found this one on sale. 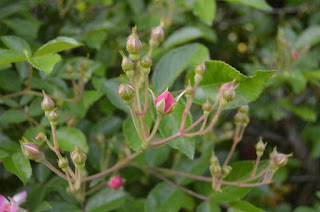 The roses are doing well so far 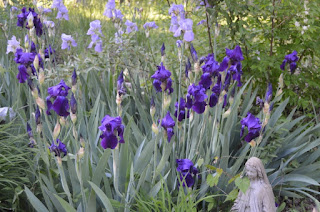 as are the iris. 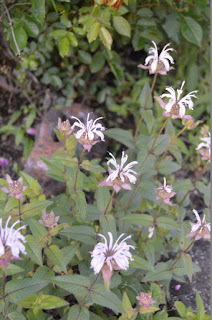 Hopefully the bees will discover the bee balm 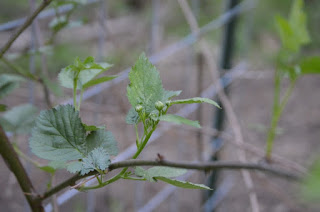 and the blackberry blossoms that are starting to open. 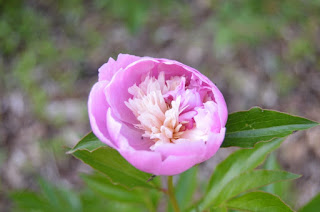 The peony plants are smaller this year, maybe
due to the cooler spring with all the rains we have had.

The bees seem to be OK.  We think we have saved at least
one Queen and maybe another.  One hive is coming along better
than the other.  My husband will check today to see if he sees
progress.  We are expecting new bees towards the end of the month.

More details later but we have had a couple of setbacks.

My mother in law passed away on Tuesday night.
We were able to sit most of the day at the nursing home with her.
She has been there several years and was pretty non-responsive
for quite a long time.  My son is flying in for the funeral which
is scheduled next week at Jefferson Barracks national cemetery.

Secondly, I was diagnosed with diabetes, probably from the
prednisone I had been taking for a few months.  They say if you
genetically lean towards diabetes, it can flip you over.  My sugar
was very high and they sent me home with medicine; however,
no guidance whatsoever!  I get classes today but it's been a week
and I have no idea what to eat or if I am high or low.  It's not a good
thing.  A one page diet example would have been nice.  I looked on
line and found lots of diets but I need one that will also work with
the colitis since they seem to want me to eat different things.
I'll work it all out today.


Posted by Kathy Felsted Usher at 4:57 AM

Sorry to hear about your mother-in-law. Get a paperback on eating by the glycemic index; it will help you.

How can you be diagnosed with diabetes and not be given a test meter? Hubby has type 2 (which is what you may have). He was diagnosed almost, gosh, ten years ago? after he developed an infection that got really severe and had to be treated at a local clinic. His mother, grandmother and other family members had diabetes, so he was not surprised. We think he had been pre-diabetic many years before he was diagnosed, but the military doctors couldn't find anything.

Anyway, if your doctor didn't give you a meter, the first thing you should do is get a referral to a good endocrinologist. You don't need someone who is going to do a crap shoot. The first year of hubby's diagnosis, his sugars were still all over the chart because a general doctor isn't knowledgeable enough to treat diabetes. Hopefully you can find a good endo in your area. Ask family or friends if you know someone who is type two. Out of control blood sugar can leave you 'dragging'. It can make you pass out. It can make you constantly hungry. It's not something to mess around with.

Pasta is a big cause of blood sugar problems. Dreamfields is the way to go. They make a great selection of pastas specifically for the diabetic. http://dreamfieldsfoods.com
Search the internet. You can learn a lot if you have the time. http://www.diabetes.org/?loc=logo

Fiber and carbohydrates are the things you will need to watch the most. Hubby is so well controlled now, that we don't worry about it any more.

Don't let it overwhelm you. The first step really is to find an endocrinologist.

Didn't mean to concentrate on all that, but it is a subject we have learned to live with.

You have my condolences on your mother-in-law. It sounds like it may have been a blessing. *hugs* May God comfort and bless you all. ♥

I just saw a new survival magazine (one of the ones I don't buy regularly) and it had a big article on chicken tractors. Mine are just free range but I wanted to keep the controlled that's definitely the route I would take.

I love the chicken tractor and the composting. Flowers are beautiful! I'm sorry about the diagnosis. I hope diet will help lower the sugar. I'll be thinking about you girl.

Death is a hard task master for the living.

My sister is supposed to be diabetic, but she eats whatever she wants and feels fine. I guess it just depends on how bad off you are. We'll both be pigging out on Sarah Lee strawberry cheesecake tomorrow morning. Still, it's better to know what's wrong with you so precautions can be taken when necessary. I was diagnosed with low testosterone levels a couple of weeks ago. (Don't laugh, it happens to every man eventually!)It's probably been low for a few years now because it accounts for nearly all of my problems. After just a couple of weeks on AndroGel I'm already starting to feel like my old self. My energy levels are WAY up! No more depression. Even my insomnia is gone. And I've dropped more than 20 Lbs already. So really, it's always good to know what's wrong with you. I feel like I've lost a couple of years of my life for not knowing.

I will research that Gorges.

Harry, the hideous Cornish Cross chicks are in there and it's perfect since nothing can get in. I suppose a snake could make it's way in somehow but keeps the coons and opossums out.

Yahoo, glad you are feeling better! I've lost 45 so far!

Linda, yes, I have been stressing over that too. A week before I saw the nutritionist because they are only (mobile) there on Thursdays and every other Friday. She says I am not eating enough and I actually have to up my carbs. Apparently my breakfast is diabetically considered a snack, so is my lunch and dinner. Now, to figure this out and continue to lose weight- since I still have a lot to go before I am at what would be considered a healthy weight for my height. They recommended Dreamfields, eat less but feel full. Now I have lots of literature and exchange charts. I still don't think I can possibly eat 45 carbs per meal!

Oh no, you have diabetes too? Kathy, you're falling apart. Like the rest of us. My wife has had diabetes for a number of years. Watch your sugar and take your medicine. Your health is in my prayers.

I love that fountain. Beautiful.