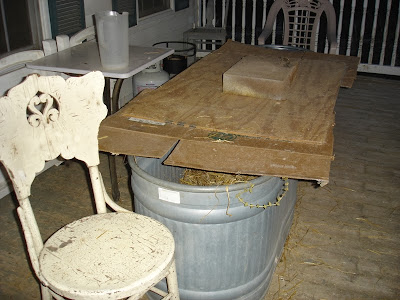 The temperatures dropped as moisture moved into
our area creating our first winter storm with
any measurable precipitation. When we have a
threat of ice I work from home because we have
little to no road maintenance.  If we want the snow
plowed, the guys have to plow it with their four wheelers.
I don't chance it, so I work from home.
We have a full attic- floors, drywall, bookcases, etc.
so I set up my office space there.

My husband must have a soft spot in his heart
for the cats' comfort afterall because
when the work day was over he took me
out on the porch to show me our new Cat Hotel!
As strays, they are not house cats. 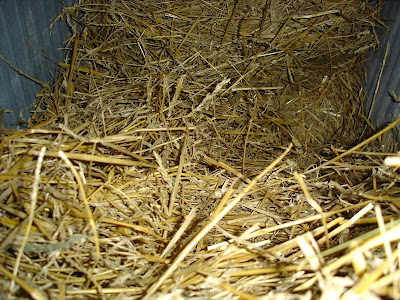 He took Bird's old tubby out to our 9 ft wide covered porch,
filled it with straw and did the same with a second tubby next to it.
He covered them with cardboard with an allowance
for an entrance/exit.  He covered it all with plywood and
added a capstone from our garden wall to secure it.
They leap up on the chairs to jump in
but can exit from the inside without added support.
It is pretty much protected from the elements. 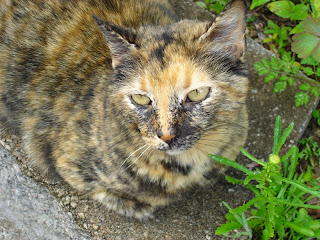 Specks, jumped in right away
(old photo, there's no green left here!)
but the male cat, Spot, was very leery!
I don't know if they are going to use it,
but  as we're due for more snow and sleet over the
weekend, it doesn't hurt to let it stay. 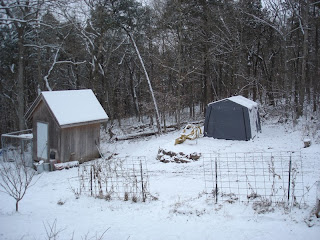 They have found the tractor tent so they
may be in there as well.  My husband spotted
one sneaking in and out beneath the tent door.
Specks has also been known to hang out
in the green house when the sun is shining.
The plastic door won't zip up anymore so it
is open to all of them. 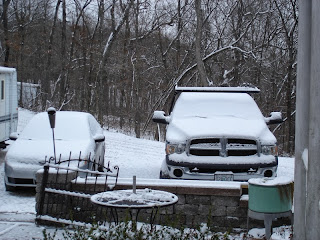 Gimps is allowed to live in the garage,
she's not social so she doesn't cuddle with the others
but is a very petite, sweet cat.
Rumbles normally stays out but the last couple of
cold nights we kept her in the garage too.
We can't have many in there because they knock
things off shelves and damage my husband's
equipment when they scratch.
Sugar Bear, a male, is on his own. The two males
don't get along so he has an igloo beneath the back
deck. I often throw scraps to him without the others seeing.

Does anyone else have other ideas for sheltering cats?
I'm on rocky unlevel ground so I can't dig down more than
a couple of inches, if that.  I'd be interested in knowing
other alternatives.

Posted by Kathy Felsted Usher at 8:19 AM

One of our cats seems to prefer to make a nest in the loose hay that I put up for the horse and the other is often curled up near where the chimney comes out from the house. I put an old window up against that to keep the weather off and it must stay pretty warm there. I think she likes being able to see out of the window in case something sneaks up on it.

Our cats have used the tractor seat in the garage to keep out of the weather.

Our house is pier and beam, so they are often under the house. We rarely have snow, but sometimes.

Our cats have also used the tires of our vehicles; and my husband says there is a space above the gas tank of the pick-up. We have seen cats go up there, too.

You have hay? They probably get into that, too, especially if they go there looking for mice.

Oh, our cats were house cats we brought from NC. For the time being (i.e. during the cold snap), the cats are staying in the living room with their litter box and food.

We put in a 3 plaque wall heater which helps a lot, with the addition of a small tank top heater.

That cold is supposed to come our way. The temperature already dropped this evening and it's supposed to get worse the next few days. Possible snow tomorrow night. Yikes, I hate that four letter word. My heart goes out to all the animals too. Poor critters. They are God's creatures too.