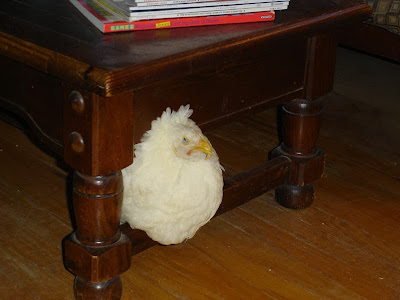 I lost Bird last night.
She had been showing some signs of weakness,
having more frequent seizures and stumbling.
She stopped eating sometime late Saturday night
and I knew it was nearing the end Sunday morning.
I held her the early part of Sunday night
and then handed her off to my husband
while I took a shower.
When I returned, she was gone. 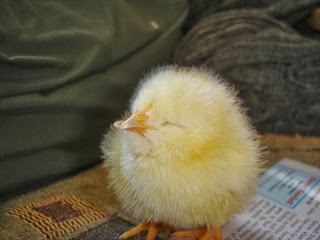 I found Bird in a farm supply store in town, we didn't hatch her.
She was cross  beaked and missing an eye-
it wasn't an injury, she just didn't have one.
We found out later, when she grew larger,
that there was a lid, just no eye.
Occasionally, it would open- after a seizure.
The young girl who was the clerk had been trying
to keep Bird alive but she wasn't always at the store.
They told her she would have to kill Bird
so I took offered to take her home instead.
They thought she had only a matter of weeks to live.
That was back in May. This is November.
She had six months. 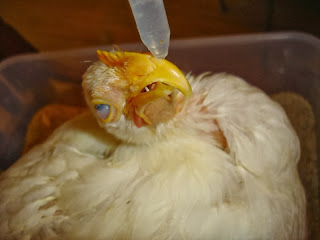 She was not only one eyed, but the other was blind,
or extremely impaired.
I had to feed her a slurry of chick food until she was
able to scoop it up in a deep tub.
I provided water by eye dropper
until I discovered I could put her in the shop sink
and let her scoop it up.
Being crossed beak was not nearly as bad
as being totally blind. 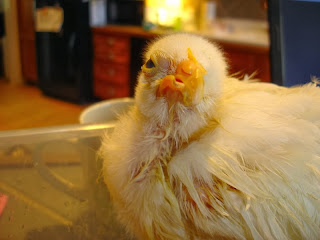 While she may have looked a little different
than most chicks, when you got to know her,
she was beautiful.  We were her flock,
she would either stand by our feet  or sit in our laps
as we would pet her until she purred with contentment
and whistled sleepy little chicken tunes. 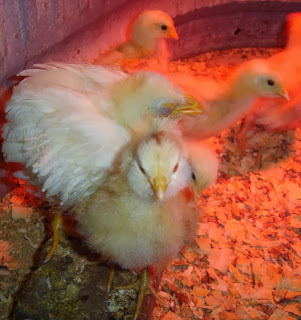 She lived inside and had to learn our floor plan.
She couldn't be introduced to the flock,
once they grew up, they tried to poke out her only existing eye. 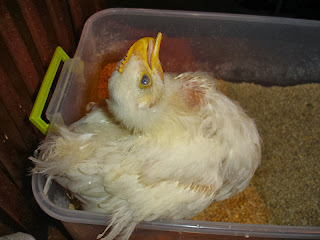 We upgraded the tubby as she grew,
she would shake her head and send bits of feed
all over the floor so we had to sweep frequently.
So bigger and bigger feeding tubbies arrived. 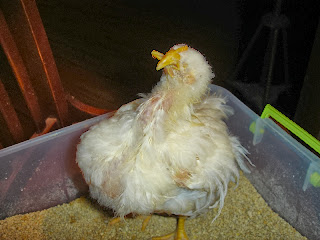 Bird managed to get along with a little help. 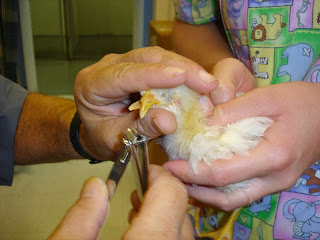 I had a very knowledgeable vet  teach me to trim her beak.
He is experienced with all sorts of exotics and
has worked with universities and zoos. 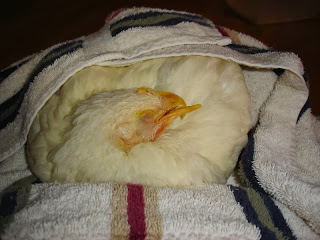 When the temperatures started to cool,
or the air conditioning was on, Bird seemed cold
so I would wrap her in a towel and pet her until
she fell asleep. 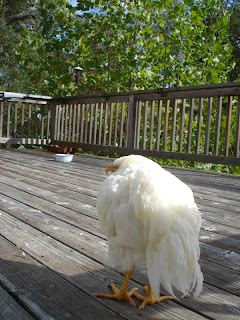 Then we started taking trips to the deck so
she could stand in the sun.
I would get the rooster to crow back at me
and told Bird that he was really trying to get her
attention since she was such a beauty.
I think she started looking forward to
hearing that rooster crow and the song birds
fly back and forth to the feeders. 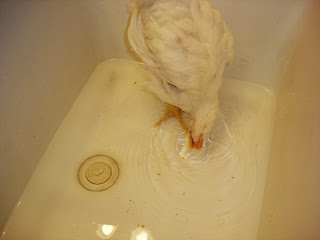 A few times a day we would have a utility sink drink.
I'd pick her up and ask her if she wanted a drink.
She knew "drink" and "food" and probably "sun".
I'd tell her we were going to get a drink
"just me and you"
then tell her she was my BFF- Best Feathered Friend. 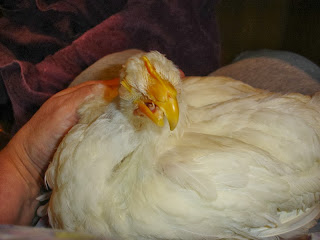 The last couple of days all she did was sleep. 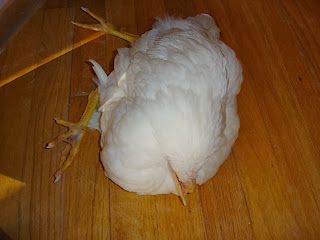 Then she would lose the strength in her leg and fall over. 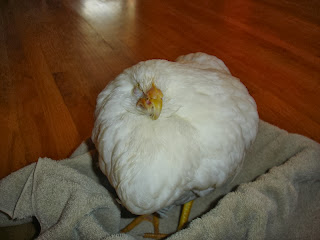 So I propped her in her original small feeding tubby
until she could get her footing again. 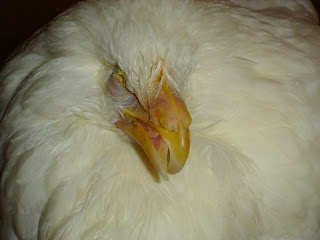 But the seizures were just too much for her.
There won't be any more sleepy little bird tunes.
Her tubby stands empty.

Kathy, I am so sorry. I know you will miss Bird. I will too. Yes I have some tears. You gave Bird such a good life! You are rare and loving.

It is amazing at how successful you were with that chick, I have lost so many that didn't seem to have anything wrong. An amazing story.

As I as reading, I was thinking how lucky Bird was that you found her (and vice versa). Reminds me of my niece and all the 'misfits' she adopts and gives them silly, fitting names. Right now she has a cat with a nervous disorder that makes her walk all wobbly. Her name is Weeble. She has a blind boy cat named Magoo and once had a cat with a similar nervous disorder to Weeble and his name was Crash. Just today she adopted a young German Shepherd who had to have a leg amputated. He got a more normal name-Zeke. I'm so sorry your Bird is gone. Pets are just another family member and losing them is difficult.

You are such a kind and compassionate person. Such a rare trait these days. So sorry for your loss but this story warms my heart and reminds me how loving we should be to all God's creatures.

You are such a kind and compassionate person. Such a rare trait these days. So sorry for your loss but this story warms my heart and reminds me how loving we should be to all God's creatures.

Oh that is so sad. You really did give that Chick a good life, probably better than if she had been born healthy. Your love for her is so admirable. I believe our pets go to heaven with us. Our relationships with them are built on love. You'll see heer once agains some day. Having lost pets, I know it hurts, and my sympathies to you Kathy. How many months did Bird live?

Manny, six months, much longer than we thought.

Thank you for the nice comments. I am not taking it well, particularly on Monday-the first day without her.

She was blessed in a way few chickens are - she was loved! Many people aren't even that blessed. You have a good heart, Kathy.

I'm so sorry Kathy. You did a wonderful thing.

I am so sorry. You certainly gave her the best home she could have wished for and a much happier life than she could have expected otherwise.
Blessings,
JoeyLea

Oh no, I am so very sorry to hear about Bird. You were the BEST Mom to Bird and she had the best life with you. Sending lots and lots of hugs, Kathy XXXX
RIP Bird, you were quite simply, brilliant!

Kathy, I'm so sorry for your loss. I am tearing up while reading this. Bless you for taking her in and taking such good care of her. I'm so glad that she was cared for and knew kindness while she was here. You are so awesome for being there for her!

I feel really sad about Bird. Like when one of my ferrets passes on. But I think the same thing applies to Bird as the ferrets. The ferrets are all rescues, too. Bird had a good and loving family. She wasn't scared or hungry or cold. She knew she was loved. It was kind of you to take her in and care for her.

How lucky bird was to have such a devoted owner. I know you will miss her very much. I'm so sorry for your loss.

You really did give her a good life, Kathy, and it showed, she blossomed under your care...I dont think there was anything more you could do - she most likely was starting to mature to becoming a hen, and that was probably not a good thing for her system.

you gave her everything, and gave us a glimpse of one of those small miracles that we can all lose in the busyness of today...

What a happy and sad story all mixed into one. You gave her a wonderful life. - Margy

Thank you all. I am still so sad and so happy that Bird has so many people that thought of her. I want to print this post out and save it. I'm thinking of making a Bird scrapbook.

My condolences, Kathy. There is a special place in God's Kingdom for those who so lovingly care for the animals whom He has given us.

I think that would be a good idea. I have pictures of all my ferrets, and sometimes it makes me feel happy to look at the pictures and remember that we had good times together. I think the poem "Rainbow Bridge" is true.

My hat off to you for giving her such a good life. I'm sure you will miss her, but she couldn't have lived a better life with anyone else. I am sorry for her loss, but celebrate that we live in a world where she was allowed to live a happy life. Thank you.

Kathy, I'm so sorry about your little bird. You did a wonderful job, and no doubt made her short little life more humane and bearable. You are a strong and kind hearted person.


Thank you for stopping over my little place and leaving a comment about pies. You are right practice practice practice, and I'm still
practicing. Even the book says just practice, there is no other way to get better at it. We eat our mistakes here, sometimes they
look awful, but don't taste too bad, I've come along way from the bent fork pie crust..

Kathy- I must have missed this post and now I am so sorry to hear that Bird is gone. She had such a good "flock" to have cared for her the way you did.

Awwww...what a story. THANK YOU for taking care of Bird when no one else would/could. What a great mama you are to let her roam the house, to have to feed and water her several times a day, and to take care of her. THANK YOU. More animals need homes like yours. I am sorry that Bird has passed, but she had the BEST life possible, and that's what really matters.

What a sweet soul you are for giving her 6 months she wouldn't have had otherwise. xo