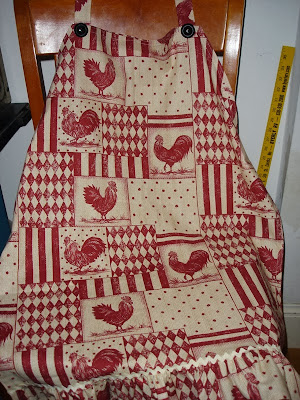 I Won!
What a pretty apron too.
Michelle offered this great prize in her
Hidden Objects Game over
on her blog (link here)
Here is an example of one of the rooms. 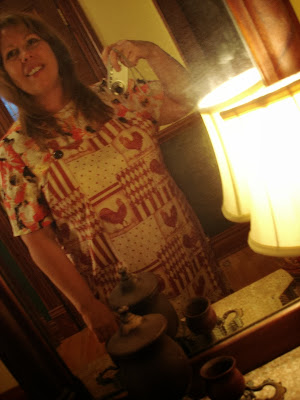 As I was pulling into the drive my husband told me the package arrived
so I ran inside and tore open the envelope and there it was,
even cuter than I'd imagined.  I tried it on immediately
but had to snap the photo myself as the husband was working outside.
I had just lost my BFF (best feathered friend), Bird, my special needs chicken,
and I have been so very sad so this was really  nice.
Especially since it has chickens on it. 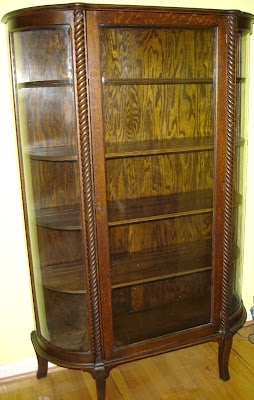 My husband has had some time on his hands
so he asked for a list of things I needed done.
YES- he ASKED for the list!!!
We had started to refinish my grandmother's old
china cabinet so I could display nicknacks.  The
shelves were missing the posts that hold them up,
there were water stains, scratches, etc.
He used Briwax, which is a tinted wax rather than a stain.
Now I need to transfer everything over. 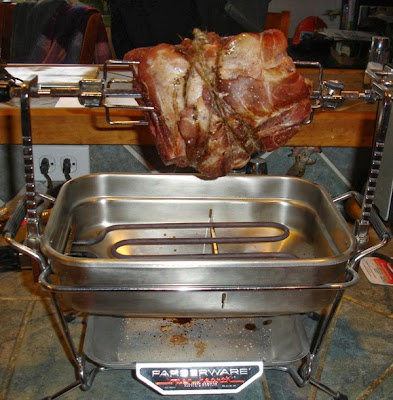 He pulled out the old rotisserie for a pork butt we had
in the freezer.  He slowly cooked it for around nine hours 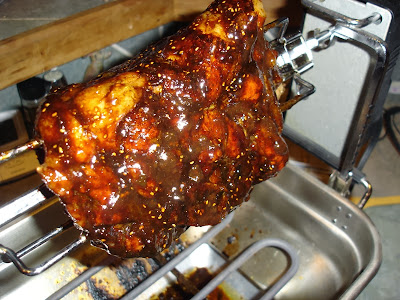 and glazed it with raspberry chipolte sauce until it
was  tender, sweet and spicy. 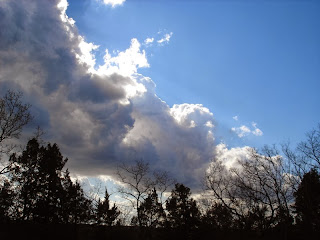 The damaging storms that hit last week started
somewhere around here.  The temperatures had soared to around 80, which
is really a bad sign at this time of year. They were just starting
to break up but we were still experiencing strong winds
estimated to be 60-70 mph gusts.

We had the windows open but I never dreamed the
gusts would be enough to blow my planter out of the window!
Poor Mary and Baby Jesus!
I still have the pieces but I think it's too far gone.
I fortunately rescued the other two pieces before they
were blown to the floor. 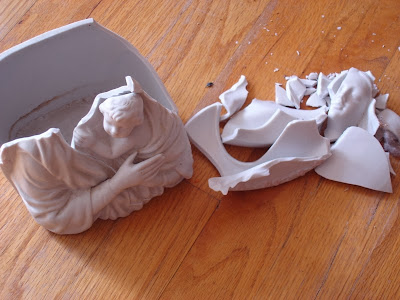 I haven't had  much to say lately.
Just beginning to feel better after Bird's passing.
I've got pumpkins to bake,  quilting to finish and
final Christmas purchases to make so I better get moving!

Posted by Kathy Felsted Usher at 5:45 AM

That apron is perfect for you! :)
I'm glad you are starting to feel more like blogging. That is too bad about your planter, it does look beyond repair.

What a fun apron:) The planter might make a neat mosaic, with the kinda profile etc.
Keep well.
JoeyLea

I know how you feel...about not much to say. I get that way, most of the posts I put up this week were already written before Trouble passed on Monday. :/
I do like your new apron, congrats on the win...and the chickens on it are perfect, and you will think if Bird, fondly, when you wear it.
Sorry about the broken figurine. Maybe you'll be able to find a replacement online.
Take care...we're having cold, wet weather thru the weekend.
Stay cozy where you are!
Pat

I knew you were feeling badly about Bird. I wished I knew somehow to cheer you up, but something like that takes a lot of time. It's good to see you back and feeling better.

I liked your apron, and I'm glad that weather up there didn't do any worse than smash your planter.

Well now, don't you pretty in your new apron. Congratulations on the win. What time is supper?
looks like a good feedbag going on at your house.