Deutsch Country Days - Everything Else 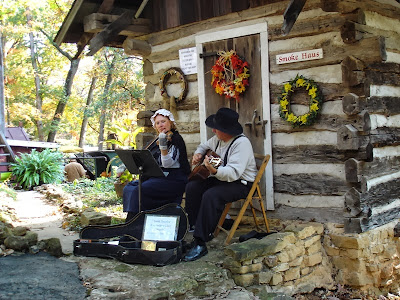 The last post in the Deutsch Country Days trip
begins with the street scenes.
These melancholy musicians  played outside the
smoke house.  There was one particular song I would love
to have but is had such a difficult name that even they
couldn't pronounce it.  Beautiful music. 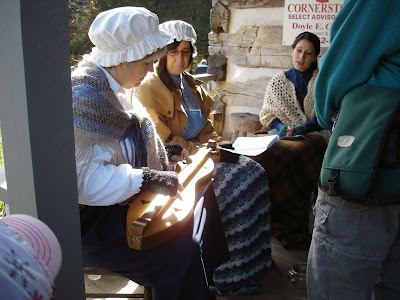 The dulcimer gang was much more lively
getting the kids involved as they sang
Old MacDonald and other tunes. 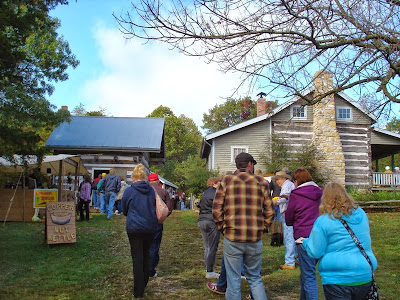 The entrance was next to the spiced nut vendor,
it smelled like cinnamon rolls but actually
were several flavors of nuts. 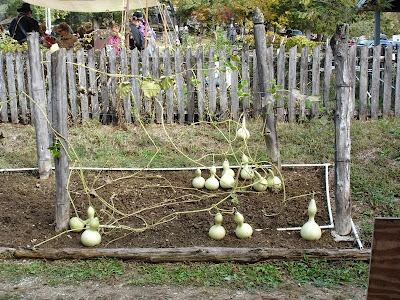 The gardens were winding down, this bed
of gourds ready for whatever crafts were
on the schedule. 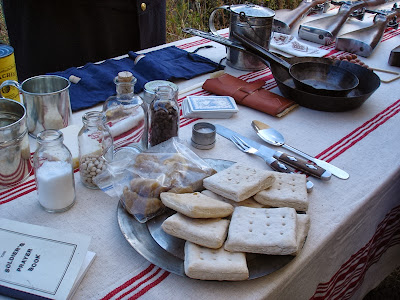 I had fun with this Civil War tent.  I told my granddaughter
and the neighbor girls to be VERY careful around these guys.
One of the Yankees told them that it was OK, they were the
good guys, or at least the winning side.
I looked at the neighbor girls and told them that since they
were German, they would be OK, probably on this side had
they lived in this area back then.

Then I turned to Taylor, my granddaughter, and said
You, on the other hand, have cause for concern!
Her eyes got big and she hurried on.

Pictured on the table is Hardtack, a mixture of
flour, water and shortening, which makes a
preservable food source.  It was hard as a rock.
I have the recipe for this and a hardtack pudding
in my Rebel Cornbread and Yankee Coffee cookbook. 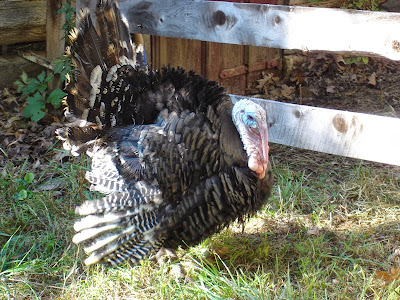 There was a petting, animal observation area for the kids.
The girls loved the goats but I was admiring the turkey. 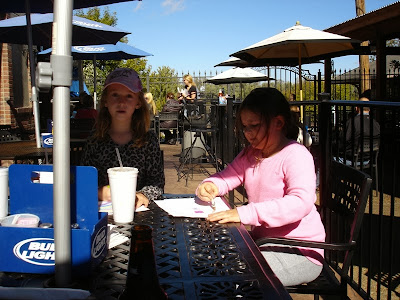 After the event we decided to stop for an early dinner
in Washington, MO at a little place with an outside patio
next to the train tracks and river.  The girls were
coloring their menus and then decided to decorate the cups
as well.  Pretty clever. 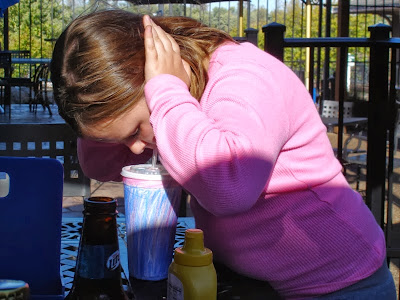 This is a first for me.
Do you know you can stop hiccups by
drinking through a straw while holding your ears? 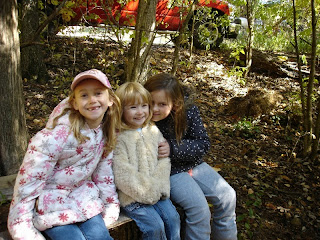 That is the last of Deutsch Days for this year.
The rest of the week was spent taking care of some
errands, have a few lunches, working on
sewing projects and trying to get some Christmas gifts
in order so it's all done and paid for by November!

Living History Weekend in Marthasville, MO
as Deutsch Country Days kicked off it's annual
event on the historic Luxenhaus Farm.
The all volunteer staff demonstrated skills of the
German settlers.  It is sponsored by the Lexenhaus Farm
German Heritage Foundation.

Part 4 and all previous links

Posted by Kathy Felsted Usher at 8:59 AM

Glad you all had a great time. ♥

oh wow!
the music sounds nice... the girls looked like they had fun and you sound as though you had fun... with the Yankee regimen and teasing the girls.
didn't know this about hiccups.
will have to give it a try next time!