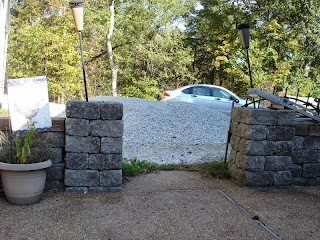 A Big Pile - O - Rock,
That's a lot of rock too--80,000 lbs.
My husband was working on leveling out a place for the tractor
and reworking the driveway, removing low spots
that collect water or that allow it to cascade across
places that it wasn't planned to go. 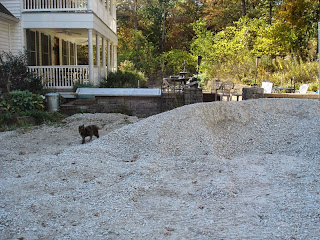 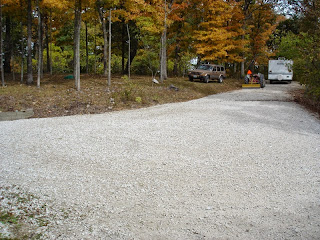 We had to park the vehicles in unusual places
to free the entire area. 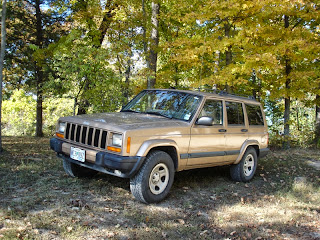 My husband must think we were making a Jeep commercial! 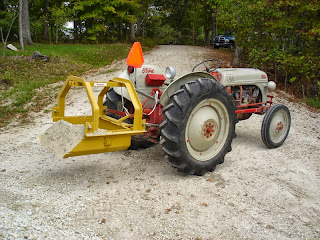 It's a good thing he has a tractor
otherwise he'd be shoveling a lot! 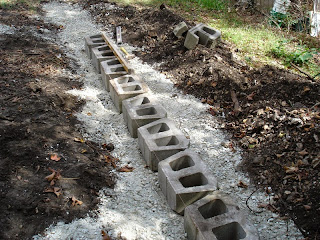 Here he dug a trench out by the chicken coop
leveled it out and lined it with some
blocks we had stored out back. 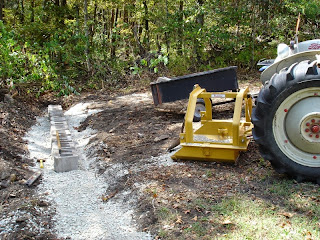 He leveled and back filled it. 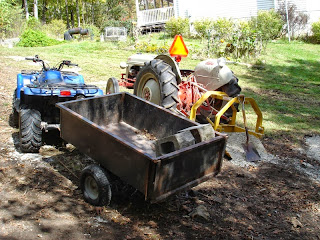 He brought the blocks up using his
four wheeler and little trailer. 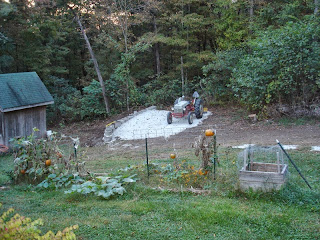 Finally he had the base for his future shed.
For now it will be the open parking place for the tractor. 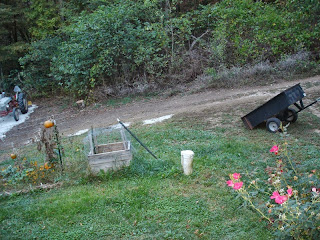 He will also be rocking the dirt driveway
that services the side yard.
Then he will rework the side garden
adding more planting space by
changing the bed layout. 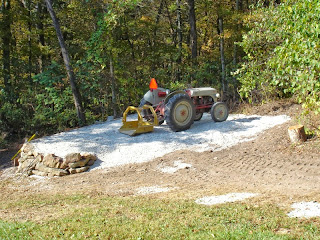 He used the tractor to haul up some large stones
that he put aside back when we were building the house.
He used these to brace up the front wall. 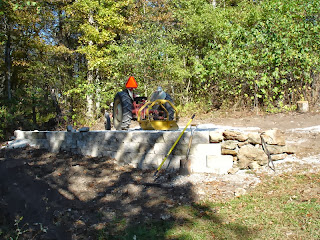 It will eventually have some sort of shelter on it.
We might start out with something temporary
until he can build a machine shed.

The nice thing is that whatever he builds will have
space for the cats to get out of the weather.

He did a good job. I am not sure but do you think he really wanted to play with that 8N in the rock pile, it had to be fun.

Yeah, while he is waiting for the next construction job he gets to be the keeper of the house; however, it normally involves working in the yard on tractors! He's taken it through the woods, up and down the road to grade it (every day???). The guys all get together with their tractors and . . I don't know . . admire them? Big Tonka toys! ( fixing a spelling error)

Wowza - that's a lot of gravel. It will sure be nice when the rain starts though.

It looks like you are moving a lot of things around in your yard. I hope it comes out the way that you are wanting it to. Good luck.

Boys and their toys!
the Tractor work looks great. We've had so much rain the past 3 days...a tractor would be mighty useful...as would a big pile of rock. My soninlaw got his work truck stuck in their driveway next door...and my daughter almost got his truck stuck trying to help get it out.
The Jeep commercial would be great...apparently that company is having a surplus of Jeeps to sell right now.
Pat

That's impressive. The tractor is very useful, isn't it? I've been looking for one but used tractors here get passed down from father to son or Uncle Billy Bob.

I like your Jeep. I'm a big Jeep fan, we have three right now.

A very fun post - guys love to push, pull, haul - you name it!! Give them equipment and they are little boys in a sandbox. Your 4 wheeler and utility trailer look like ours only a different color! My husband has tractor envy too

We so need some new rock on our lane! You are going to appreciate this when it's wet and muddy. :)

I bet you are glad about having the tractor! That's a LOT of heavy work going on.