When "Mama" Comes to Visit 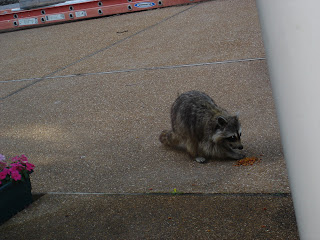 After the wild cats have had their fill little "Mama" raccoon arrives to clean up their mess.  She's been visiting now for about three years, first arriving cold and damp, obviously after giving birth.  She was starving.

I'm not sure whatever became of her babies but we only see a couple of raccoon now.  She wanders up to the porch and sits quietly munching on the leftovers.  You can speak to her and she seems to listen.  You can get up and she backs up to let you pass.  She knows her name. 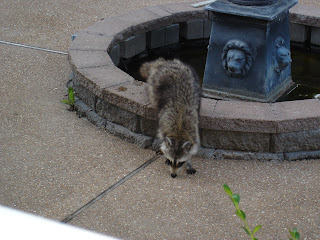 They don't always wash their food but they do roll it around in their paws before eating.  On occasion she will stop and get a drink from either the water bowl or at the fountain.    Sometimes she eats with the cats and sometimes they bop her on the nose and she goes away until they are done.  She is definitely not the Alpha fur ball.

Our neighbor had to contact our state office due to an animal bite, not an aggressive animal, in fact it was a baby that was cornered by their small child.  The state had to test the animal but told them that they have not found any incidences of rabies in raccoon they tested.  Regardless, we make sure the children remain calm and keep their distance whenever she is around.  I don't want her "tested" or the kids hurt. 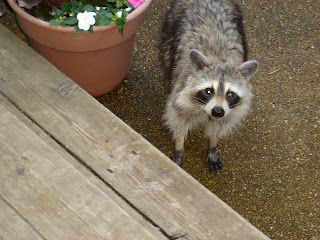 Can you see her left eye?  The one on your right?  It's clouded over so we believe she's blind in that eye and it puts her at a disadvantage.  She comes early, while it's still light probably to get a step ahead of the other scavengers.  After she has eaten her fill she moves on to find the next tasty morsel to munch.

I'll admit to sneaking her some food if there are no leftovers.  I'll scrape the plates off the side of the deck or even open a piece of cheese although it's not even a leftover. The poor thing needs a full belly.
Don't tell my husband!

I always enjoyed coons, but be careful, they can get too bold for their own good very quickly.

I knew a woman who used to feed wild raccoons big chocolate chip cookies. They would reach up and take them right from her hand.

At our old place a raccoon would bring her babies up to our screened in porch. A cat had torn a hole in the door (not our cat) so we covered it with an animal guard. I had while vanilla sandwich creams for them. The mom wanted to take it with her mouth but I showed her that I needed her hand. Smart thing, she knew to use her hand from then on.

On, the screen still had the opening, just covered with the guard that was wide enough for a hand.

We don't let any others around mostly because of our chickens, only her because she is so docile. The cutest thing we ever had was a baby skunk but thank goodness it moved on! It was as small as the palm of your hand and didn't even seem to notice it was walking around our feet. We kept to the safer side of it! There were two of them, must have been time to leave their mom and strike out on their own. There's lots of skunks around here.

A mama raccoon used to bring her babies to this lady too. I guess they were hungry and mama just wanted to make sure they were fed.

What a nice thing you guys do for "Mama"! :)
She probably wouldn't be able to make it on her own with that eye anymore.

Are you certain you didn't know me in a prior life? Ever lived in Eureka MO?

Great story, Kathy. Love the pictures, too. Thanks for sharing with us. :o)

I like to be kind to the wild animals. I even put out wild bird seeds in the park so the birds will have food in the winter months. My two Chihuahuas would never shut up if we had a coon come visit. As it is they will smell a spot on the ground for a good 5 minutes and it drives me crazy when I am calling for them to come inside. It's like what ever animal was there has them in a trance.~Ames

I really like her, and I know she's not my digger which, by the way, struck my flower pot on the porch this morning!