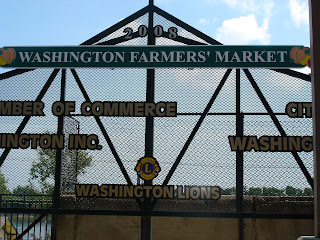 VACATION
Some people hop on a plane for the Riveria Maya, some to lie beneath stars on mountain tops and others jet across seas to far away lands.  Not us, we are taking the most awesome, fantastic, fabulous vacation this side of Calvey Creek.  It's nine full days, ten nights, of Robertsville and beyond!
(Oooohs and Ahhhhs).
Yes, folks, it's nine glorious days of traversing our great county and maybe an adjoining one to boot.  Amazing sights, thrills and chills for this lucky couple.
Perhaps you would like to join along!

VACATION: Friday after Work
Fishing in the Meramec River Friday evening.
Claim to fame:  2 pumpkin seeds in the boat, 1 wiggled off  in the air.
Horrible Incident:  Three Barbed Treble Hook
The fish was caught, all three hooks.  Tom had to remove it for me, one pull made the other worse.  How awful!  Since it was catch and release, we crimped the barbs, better for the fishies but more difficult to catch. 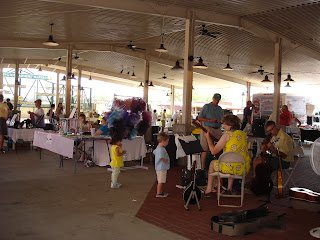 A  good old time with some foot stomping ditties compliments of this talented duo. 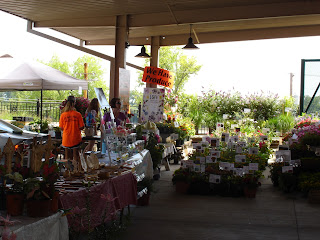 Flowers and soaps, vegetables and crafts. 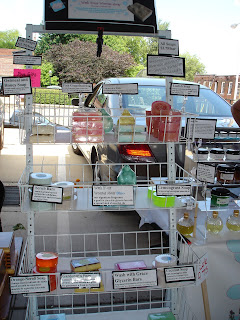 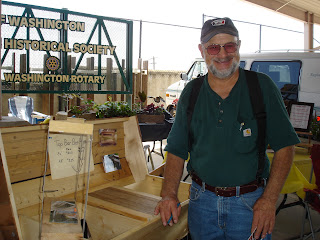 While I was sampling soaps the hubby met up with Donald Smith of Wood Bee Fun  (www.facebook.com/WoodBeeFun) who was displaying one of his top bar hives.  I wouldn't mind having this type as it is simple to make but not sure what the advantages or disadvantages are, other than this type is more difficult to get the honey out of the comb but I hear it affords more wax. 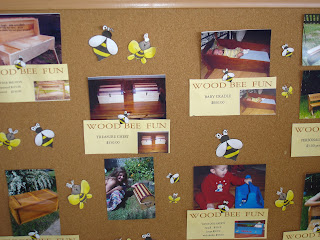 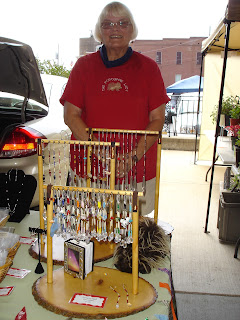 Here is where we come to the Moose Poop and Porcupine Quills.  This pretty lady lived in the Alaskan wilderness until recently moving to Washington to be near children, the hardships of wilderness living getting to be just a bit much as she ages.
Her offering included Huckleberry muffins and I've never had one of those.  It was good!

And who says you need a fancy French haute couture?  I've got moose poop and huckleberries, who could ask for anything more?  (Hey, I've eaten snails in five star restaurants.  Certainly a tasty berry can't compare to a slimy sea slug). 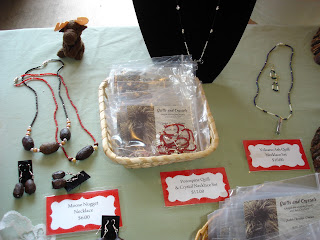 She collected moose nuggets (poop) and quills to make this extraordinary jewelry and pretty light catching trinkets.  I am really thinking about getting Mom a moose poop necklace- but not telling her!!!!  Oh how I will snicker whenever she wears it to her ladies functions!
Click on the photo to enlarge. 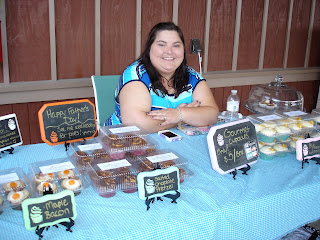 Now for a culinary marvel- hold on to your hats . . .
MAPLE BACON CUPCAKES
Yep, maple and bacon on a cupcake.  They say, bacon makes anything better. 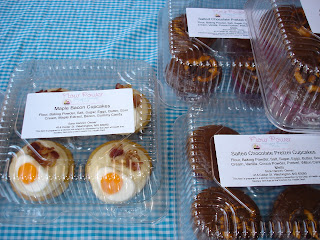 This gal makes 90 different cupcake varieties, just give her 24 hours for your order and Presto- an unusual treat for your office party.  I gotta bring in the maple bacon ones, you know everyone will want a bite. 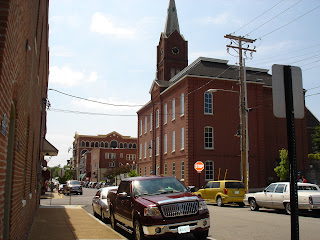 Part of downtown Washington, MO, on our way to and from the market. 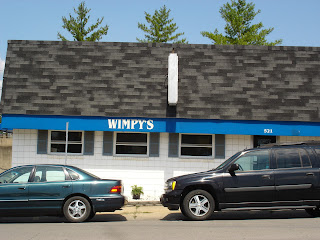 What is a vacation without a gourmet lunch at Wimpy's, established in 1930s, offering everything from hamburgers (ala Popeye) to fried chicken, breaded pork to brain sandwiches.  Seating is first come-first served in their three booths or dozen red faux leather swivel stools lining the L-shaped bar where you watch your burger cook on the flat grill as they talk about this and that with the customers, mostly regulars.  You hear about the ladies' job problems, relations and sometimes issues with their female reproductive organs.  You just never know where the conversation is going.

We had a heavenly two course lunch consisting of a burgers -- and fries (me) or onion rings (Tom)-- served on a lovely and practical square of waxed paper, cokes on the side. 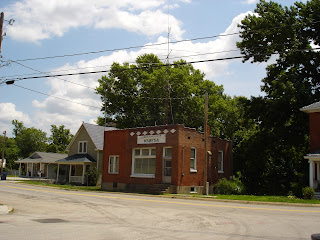 Just up the road a few miles, over the bridge spanning the Missouri River and up corn lined highways we arrived in Dutzow, MO which is on the fringes of  Missouri wine country.  Here we stopped to pay homage to the ham radio hall of fame, my husband's radio club headquarters- see the tower, see the letters on the building.  I was not privileged to enter through the doors but a picture is worth a thousand words.  Someday, he promises, if I get my ham license, I too can join the club. 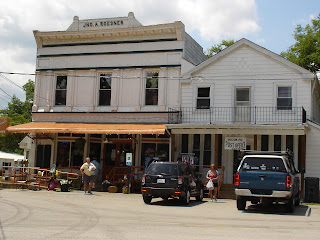 Instead, I wandered into the resale shop across the street.  I love resale shops and found the PERFECT decor if we decide to put up the wall paper I am thinking of in the foyer.  I don't want to get too far ahead but it has something to do with monkeys, sometimes,  not in this case, wearing little hats.  Think British Empire and India.  (Our truck is the blue one with ladder racks- it is more expensive to drive than mine but it has air conditioning and mine does not-- anymore.  Did I mention it is in the 90s today? Sigh) 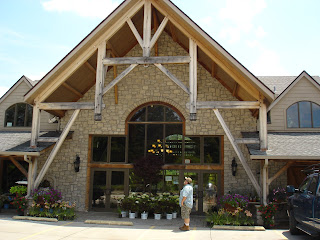 We tried to go to Daniel Boone's home in Defiance; however, the house tour of $7 (that was ok) did not enable us to walk around the grounds.  That was another $12- unguided, no activities going on, plus they were having a wedding and we were restricted on where we could visit.  We decided to come back another day when they had an event.

Instead we stopped at Frisella Nursery and Garden center, one I have only heard about on the radio,  Beautiful.  Beautiful building, beautiful interior, pretty plants.  It was in the 90s, and it's been dry so everything is suffering but there were some very pretty garden displays plus both gardening equipment, tools, birdhouses, fountains and yummy bakery goods for sale. 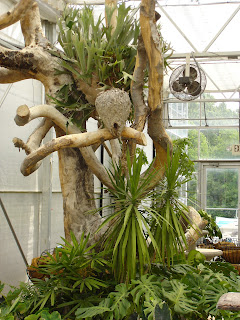 Look at this hornet's nest!  This display is amazing. 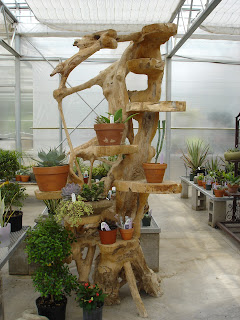 And the plant stand, can you imagine? 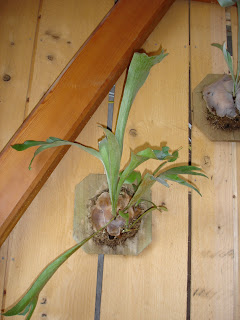 Tom liked this.  If I had a timber frame home I'd have some oddities like this too.

So ended (full) day 1 of my vacation.  Tom's at the BBQ and I have to prepare the corn from the farmer's market (yes, some corn came in early, fresh picked today).  I'm dehydrating some more Swiss chard plus some herbs from the garden.

See you after day 2!

All that in one day? Sounds wonderful! I'm not sure if I'd love or hate a maple bacon cupcake, but now I sure want to try one! Thanks for stopping by my blog!

Wimpy's sounds like a nice place to visit. Funnily, about 4o-miles south of me, Sparta is the home of the guy who created Popeye way back when. There was actually a guy from the twown way back when that he based Popeye's look on. I've seen a picture of him, and he really does look like Popeye!

One day I like to go to Lambert's Cafe in Sikeston where they throw rolls and biscuits from the counter to your table. Just hold up your hand and they'll toss one at it. I'd try to catch one in my mouth I'm sure.

Your vacation sounds wonderful, but I have to ask: How do you dehydrate your Swiss chard, and how do you use it once it's dehyrated?

Had to laugh when I read that moose poop jewelry has made its way down to the lower 48...we are getting ready for our 4th trip to Alaska and I have yet to purchase that specialty jewelry which is quite popular up there.

You sure covered a lot of ground for the first day!! And those Maple Bacon cupcakes do sound interesting.

Me too,I would like the bacon and I would love a maple cupcake, just not sure about together?????

I have an Excaliber 3900. I pick and rinse it with water and then remove the center stem. I put a colander in a pot with about 2 inches of boiling water until the chard starts to wither a little. It says you can chop and dehydrate the stems too but I did not. Then I lay them flat on the trays on 125 degrees for several hours. We will put them in soups, stews and pasta dishes. Storing it will be a problem if you don't want it to crumble, you would have to get some wide storage ware. Right now ours is in a zip lock but I intend to put it in some Lock N Locks or something similar.

I would love to go to Alaska. I can't image anything else like it.

I've always wanted to go to Lambert's but on all the occasions I have passed it, it was so early it wasn't open yet. If we visit my mom (Arkansas) we generally left about 3 AM to make time plus the kids, when small, would sleep for several hours (cut down on the "Are we there yet?").

I was in AK during the Army in the late 70s. LOVED IT! I'm sure you would like it too. I would go back to live in Anchorage or Juno in a heartbeat for the right job.

Wow, what a full first two days ya'll had!! I think some of the best vacations are spent close to home visiting and discovering "hidden" treasures! :)