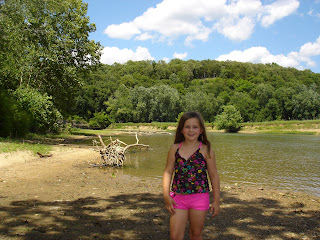 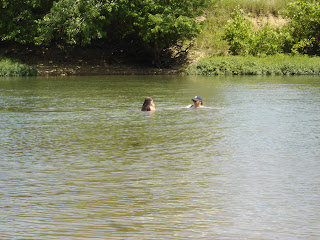 Woo Hoo- The river rats hit the water.  Taylor stayed with us Wednesday while Mommy was at work.  We headed for the river on this 95 degree day.  The water was pleasantly cool, the current running at a good clip but not to worry.  If I stood up it's only waist deep!  We were both squashed down to keep cool while the river is running so low.  We parked our chairs in the shade of  a sycamore while we jumped in.  What a surprise to find myself freezing, yes freezing in 95 degree weather, as the wind kicked up a good breeze.  Step in the sun- boiling.  Step in the shade, freezing until dry! 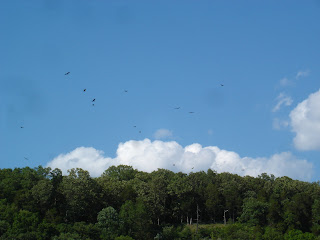 At one time there were about 20 turkey vultures circling us, dipping down and then riding the thermals to soar higher and higher.  We decided to try and lure them in so . . . . 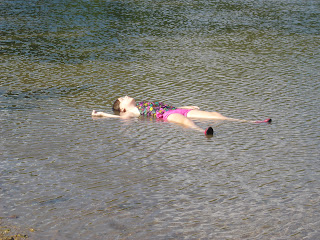 Taylor played dead.  Some flew over but apparently she wasn't appetizing, even to birds that eat roadkill!  Ohhh, what a dig that was!  I guess she needs to be stinkier.  LOL 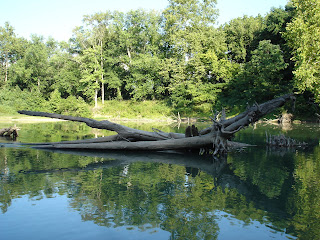 After peanut butter and jelly sandwiches and a little more swimming we took a trip up river to the bluffs. 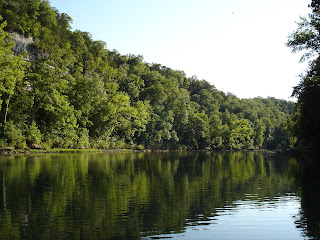 Being Wednesday, we had it virtually to ourselves.  Only one other family appeared on our gravel bar but way on the other side, kids and two dogs in tow. 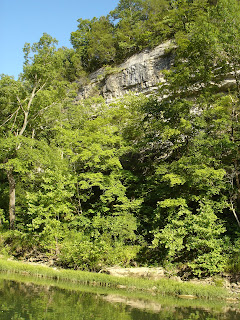 We passed the pretty bluffs and then made our way down river to the put-out.  Ribs and fresh corn were waiting at home!

I envy you. Beautiful area. What a great day you two had.

what a great place to have some fun.

What a lovely day! Tell Taylor she needs to not take a bath for a week and maybe the vultures will be interested! LOL!!