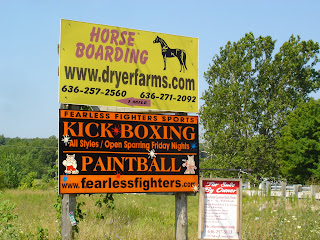 VACATION DAY 2
Nothing.
Church in the morning.
Movies all afternoon.
Ribs and rice, fresh peppers, tomatoes and cucumbers with Ranch dip.
It was nice but with a sore back, just too much sitting!

VACATION DAY 3
Abominable Pea Biter
We had to put up chicken wire to keep the Little Digger out.  Now the deer could see the barrier.  So it was up and over the fishing line, stomp around the garden and bite the peas.  Pie tins and steamer will be going up next.  After that, well . .  When is deer season?

What's done is done.  On with the vacation- Robertsville and Beyond!
We left the house, traveling down Oak Ridge to Calvey Creek road to where it meets the county road.  You can't miss it- Paintball and Horse farms.  Just turn here.

Yes, the paintball field at just a mile or so away from our place.  Here's a funny (sadly funny) story.  One day there were police sirens screaming down the county road.  Helicopters were circling our area, not a normal event.  What's up? The police received a call from the paintball field that basically said,  "My wife just shot me."  Of course she did, it's a Paintball field.   Oops! She shot him SEVERAL times, and not with a paintball gun.  What a way to call 911 -- from a paintball field. 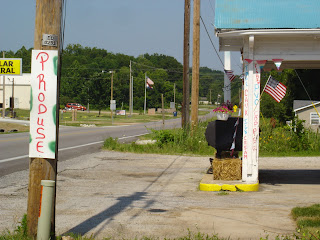 Our produse stand.  Yes, produse.  You can get it next to the cauk which is near the fishin equipment.
(click to enlarge photo)
A couple of years ago there was a terrific produce stand here but the landlord is not very people friendly.  She ended up moving and it was unoccupied last year.  It isn't exactly the sort of place you go in- more like you select and pay outside, parking along the road.  This year a friend of the landlord turned it into Roberts (as in Robertsville) Hardware.  We haven't been yet but I had to take a photo.
It's our town. 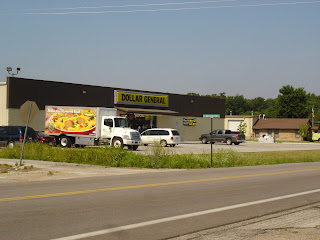 Across the street is the only real retail business.  There used to be a liquor store that sold some limited grocery items.  That was it.  The entire business district of Robertsville was destroyed when it burned to the ground.  We're growing though.  We have a couple of  auto repair places, a fire station, ambulance and a post office.  Catawissa, about a mile away has two bars, a gas station, used car lot and two churches.  That's one bar per church.  There used to be three churches but it moved to Robertsville where it's ahead of the bars, at least for now. 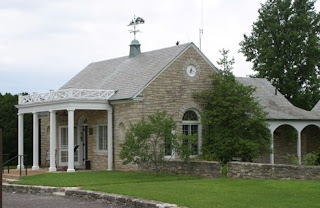 Shaw's Nature Reserve is at the top of the cut through between our place and the highway.  It's part of the Missouri Botanical Gardens and has events many times during the year.  See the Welcome Center link for more information on the natural habitat preservation.  We stopped to look at the bookstore but may come back to drive the loop or walk some of the shorter trails.  They have a plant sale each Mothers' Day weekend and there's a festival coming up in September.  One of my daughter's friends from elementary school lived on the grounds in an historic home so she got to go in and visit where the public could not.  There is an admission price for all but the welcome center. 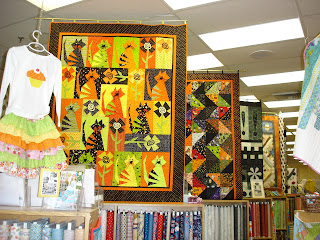 It was on to Jackman's Fabrics, a fantastic fabric shop for quilts, upholstery and clothing.  It has been there forever, over 100 years, and it is huge at 15,000 sq ft.! This is walking just inside the doorway.  There is another room behind this!  I haven't even walked the entire store yet.
Jackmans Fabrics 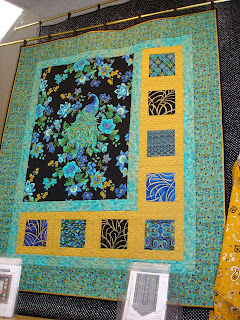 Beautiful samples are displayed with hundreds of fabric bolts.
Classrooms are off to the side, upholstery and drapery fabric in the rear plus notions and bargain bins.
The wall are covered with shelves top and bottom that hold bolts of  fabric plus there are perhaps five rows of special displays (as in the first photo), patterns, books and a huge sewing/embroidery machine section. 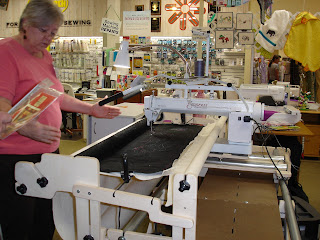 They have long arm and embroidery machines set up. 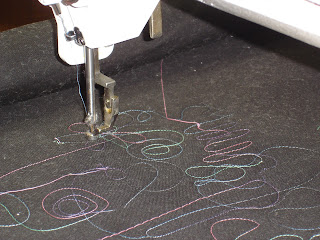 She let me try out the long arm- while this is a test machine that several people had tried, I was working on the flower where the needle is.  Pretty awesome! 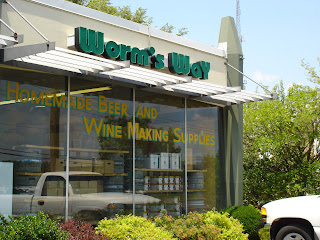 It was on to Worm's Way- composting, hydroponics, beer and wine making.  It is just around the corner from Jackman's and while we were all the way in town we decided to see if there was anything there to keep the little pea biters out of the garden. We knew they carried a pulsating sprinker with a motion sensor.  It delivers a four second blast at anything that moves but it's a gamble at $70, so we passed.  They did have an  interesting hydroponic system or florescent light systems with the proper spectrum, not household or office lighting.   I need to think about a seed starting area so we looked around. 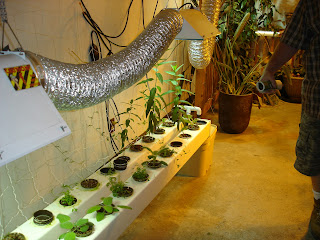 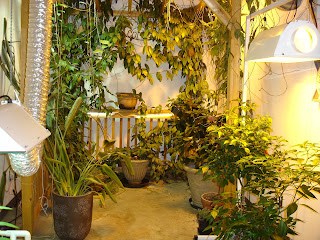 Vines, peppers and exotic plants.
They say many urban apartment dwellers or those with little ground are interested in growing indoors.  It's a pretty expensive start up cost but if you want fresh herbs and vegetables in the winter and have the space, it's available.

Worms way is known for top notch products, mostly organic.  Seed is non GMO but limited varities.  They have bat guano, all sorts (who would have thought), composting materials, worm farms, lawn and garden plus the beer and wine making supplies.  I was also hoping for soap making supplies but no luck. 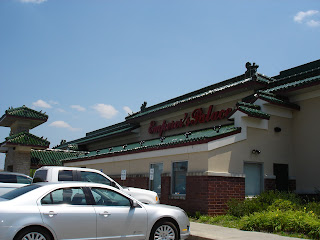 The times they are a changing.
This used to be a great Chinese buffet, all the regular offerings, a sushi bar, Mongolian BBQ, an American and Italian section, chocolate fountain and salad bar.  They also had strange and exotic things I'd have to try with my eyes shut.  You could go in and omit all the normal Chinese entres and choose chicken feet or a humongous fish (eyes and all), dumplings that looked exactly like peaches, shrimp, scallops and more.
Not any longer.  They are obviously feeling the economy and the pressure by the hundred other restaurants that have popped up in this newly expanded flood plain- it was underwater during the last Big flood.  I hope the levy doesn't fail again.  It used to be a small airport and bottom farm land.  Now it's one strip center after another, hotels, fancy restaurants, diversions. 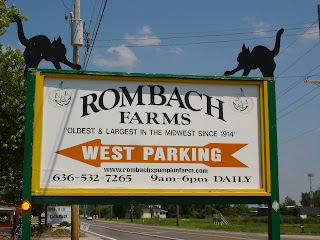 While we were down in the bottoms it was off to Rombach Farms to see what produce they may have in.  Nothing much local so we just stopped to look.  It's been here forever too, since 1914!  I remember going when I was a kid so we took ours there too. 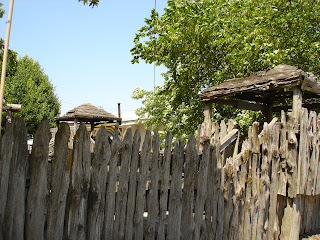 They decorate for Halloween.  Pumpkin mountains, forts to climb around, witches, scarecrows, produce and more.  Fond memories for a few generations. 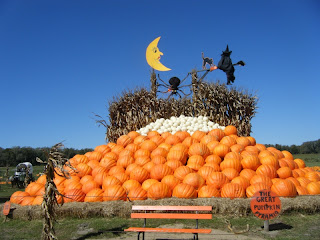 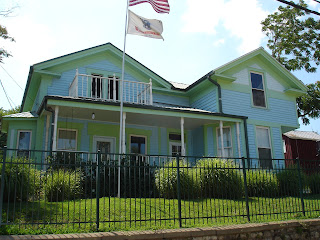 We made a full circle today, coming back through the other side of town. This is a Pacific, Mo home that was salvaged several years ago.  The color is unusual but the view outstanding.  It stands, raised, at the main intersection.   You can watch traffic go by and trains pass.  It's a block or two walk to town, a couple more to the little market.

Just thought I'd share my day.
Tonight I quilt.

Ohh, you are wrong! He wants to get a long arm quilting machine (manual) if it's profitable. His strong side is in design and intricate work, but with wood. Not a far cry from quilting (angles, measurements, etc). He's one of those abstract thinkers that can see patterns and come up with some really unusual designs that I'd never think of. He's pretty artistic. He's the only way I figured out how to cut and square up some of this stuff. He does all the compound mitering and double compound miters (if I have that correct). He could supplement our income on his down time (which there is lots of) if we get a used one for the right price and sell off a bunch of stuff we are not using. There's long arm quilters backed up for months here and it's anywhere from about $65- simple and you provide everything to a few hundred for detailed designs. While I was picking out fabric he was talking machines with the salesperson who, BTW, majored in cabinet design in college. They had a lot to talk about. The advantage would be that I too would get all those tops quilted instead of them sitting in the girl cave!

We were talking today about guys hanging around while wives shop. Why don't they hook taverns up to quilt shops? The guys would have a nice micro brew, watch some sports on tv and not care how much fabric their wives bought! LOL

That is quite the fabric store!

Well I'm pretty sure Rosie Greer would show-up anyway at one of those taverns. You might have to talk the other guys into it though. Maybe offer up some honey BBQ wings and women's mud wrestling on the big screen.

Tom should consider bootlegging antiques if he's that good. My mom's step-dad was very good at that and had no scrupples where antiques were concerned. He would buy something like a Queen Ann desk for next to nothing because it was missing a leg and then make a leg for it (and he made them look old too) and triple his money on it (of course passing it off as all original). He even got to where he could make claw feet, which is hard to do from what I understand.

I've been thinking about the furniture thing. I've got a really well equipped shop with all the tools I'd need and the skills to use them. Well, I've got the tools and the skills anyway. It's the shop that's the problem.

I've been working out of the garage which has a few serious limitations. I can't even get all the tools set up due to lack of space. My big table saw is about 7 feet wide. It's on wheels but it still presents a problem as far as Kathy getting her Jeep in every night.

But I'm going to get a system of sorts put together in there and then I'll start doing some of the furniture stuff. I like building furniture but there's no money in it for the most part. Restoring furniture seems like the way to go.

And yes, claw feet are hard to do. Fortunately, they can be bought at places like St. Charles Hardwood now so it's not the problem it used to be.

I just loved reading this post! What a fun day you guys had just puttering around "town!" :)