Out of the Coop 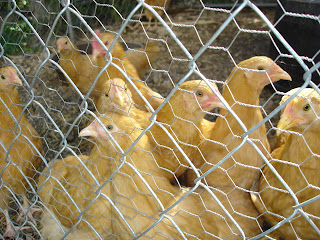 Our chickens have made a successful transition into the coop and out to the yard without the hens beating them up, nothing more than a peck here and there. It's pretty funny, the little chicks know to keep out of range so as soon as a hen comes near they run, skip and hop as fast as they can.  A couple of times they simply ran between the legs of the hen, popping that old hen right up in the air!  Boy, are those hens surprised. 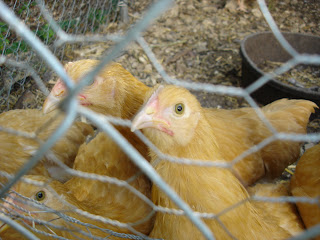 They had been separated inside the coop for several weeks, cutting it in half, even the roosts.  So they sat and ate next to each other which definitely helped the transition. Occasionally one would escape but we noticed that none of the others bothered it.

The first day we let them out in the yard they didn't know what to do. Wow, a big, open world.  They would try to fly up to me so I would hold them.  (Awwwww moment).

I put some sticks in the corner of their yard, bracing them between the wire to make an escape roost.  Then I had to teach them to use it. 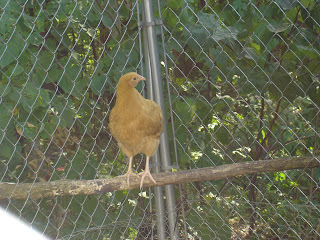 Hey, this works out great!  Safe! 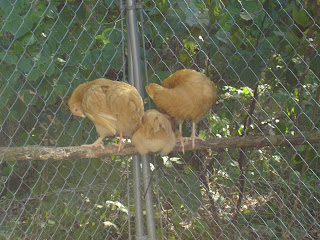 Aw, girls!  Really.  Not such a pretty picture is it?

The older rooster is keeping things in order, even protecting the little buff rooster.  Maybe he doesn't realize the boy is competition yet.   He thinks I am though.  He is very aggressive with me now but the little chicks still want me to hold them.  He even pecks the chicks when they try to get to me.  I told the rooster that we would need to settle this NOW.  Then I sang part of "She'll Be Coming Round the Mountain".  You know, the part

Last night Tom trapped the rooster in the coop while I played with the girls who promptly discovered my shoe laces  (white worms?) and began to pull and tug until they came untied.


Posted by Kathy Felsted Usher at 5:55 AM

Kathy, your baby chicks are such a beautiful color, I want some of those too. Heck I need 100 acres to have all the breeds. Love the post as always.
Dolly

Thank you! I was almost late to work publishing it (oops!). I've been simply covered up with things to do. Hopefully tomorrow will be better.

Have you tried using a squirt-gun on the rooster? It works on most dogs (Labs excluded). Most dogs don't like getting water in their face. Maybe it would work on a rooster too.

Hmmmmmmmm. Squirt gun vs chicken & dummplings, I'll think about it! :)

Thank you! They are so sweet (until they eat my shoe laces)

Yeah, me neither but these little guys wanted holding since we brought them home.

Aw they still want you to hold them? This reminded me of the chicks we had at Easter once when I was a child. They were dyed different colors and our father gave each one of us girls a baby chick. How sweet is that. Well my father had other plans for the chicks when they grew up. It wasn't pretty.:( ~Ames

LOL, they're still cute. But what are you going to do with all of them? I hope you don't say eat them. I could never eat one I raised as a chick. But then I'm a city boy. ;)

I love my Buffs too, they are such nice chickens! It's cute when they go after the shoelaces! Hope the old rooster mellows out...

Do water guns work on wives, too? Just a thought, for other guys and their wives, 'cause mine'd never need a good squirtin' down or anything like that. She's perfect in every way - always- without fail.

I think these will be kept for eggs but if they have chicks they might end up as dinner. I think Tom will need to take care of the butchering, I hope, but I'd bet he'll make me learn too!