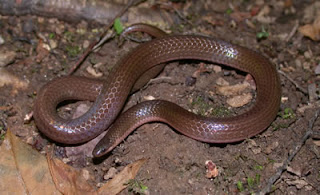 There was no tiny cottage with a moss covered roof.
Or a little red door with pebbled walkways; however,
it was someone's home nonetheless.
A tiny little someone,
a mere seven inches long,
only a wee bit high.
Barely more than a worm,
worm snake that is. 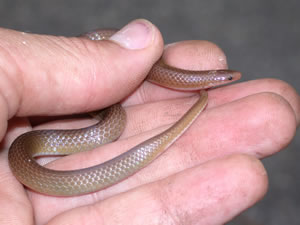 They are great hiders, rarely coming out into the open,
preferring to hide among the leaves and under rocks, gobbling up earthworms,
a delightful treat, if you're a worm snake.
We have a veritable buffet laid out for them,
Worms by the buckets.
My beds are full of underground holes.
I thought they were moles, but no,
just a snaky walkway.
Watch closely and you just might see one race by. 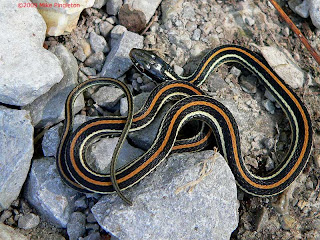 He had a buddy visiting,
A dandy dressed in flashy stripes.
Surprisingly brilliant coloring when you're sneaking up on mini frogs.
Well, what's a Western Ribbon snake to do?
A bit bigger than his friend, growing up to 30 inches long,
part of the garter snake family.
Nothing to be scared of.

I am sort of like that with any spider other than daddy long legs.

My husband's Aunt Jerry would have a heart attack if she saw a snake. She's deathly afraid of them. I just don't like them.

The sssnake looks HUGE in the first picture!! LOL!! Glad you put him in perspective!

I'm not afraid of snakes so much as I just don't like them. But I am afraid of them too I guess. I kill them all, espeically if they're near the house because I've seen them nest and take over three different houses over the years. They're really hard to get rid of once they start nesting.

I don't mind these little, harmless ones. We get the copperheads though and they like to sun on our retaining wall.

Yes, it looks huge until you see it's really no bigger than a large night crawler.

Cats. We have 6 cats that live outside and they keep all sorts of critters at bay. They are great at snakes, moles, mice and unfortunately baby birds once in awhile.

I like your snake visitors. The other day I crossed paths with a western diamondback at a friend's house. It was about 5' long. Longest I've seen in maybe 20 years. Needless to say I ran it over and let her hubby finish the job, Yuck. It never should have tried to get her dairy goats...

I found one just like the small one! I mean other then the color and that he was going to grow up to be as long as 6 feet long! A rat snake. I love snakes and I love picking them up. Such nice little (or big) friends:)

Yep, I like them too. My friend when I was growing up had snakes in his house so I was used to them. They also owned a skunk! It was supposed to be de-skunked but it still smelled but it was cute anyway. It roamed the house and if you over there for a party it it might sneak up and steal all the peanuts in the bowls!