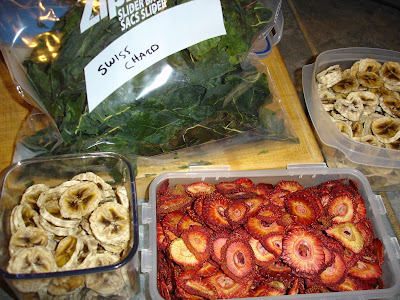 Cost, labor and ease of storage are the key elements in our decision to dehydrate most of our produce this year.  Freezing requires power which is something we don't want to rely on, particularly since we are in an area with exclusively overhead lines.  We have frequent outages due to storm damage or accidents.  Canning also requires a lot of energy, jars and a larger storage area.  I'm sure we will be canning some of our produce or famer's market purchases; however, dehydration offers the least expensive and ease of storing.

We began with our swiss chard, drying to a nice crisp, which will evenually be incorporated into soups and pastas.  Then strawberries but only after enjoying a batch of shortcake with whipped cream.  Then my husband picked up some bananas.  We want to test all types of fruit and vegetables-practice makes perfect.  The bananas do not become the hard, crisp rounds that you see in the store.  It's more like a chewy leather.  I was at first concerned at this but after surveying many dehydration posts, the consensus is that they will stay somewhat leathery, even after 12 hours of dehydration. 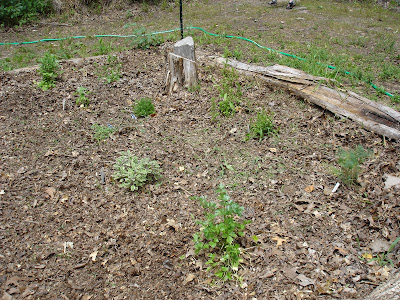 The herbs are improving after a blast of nitrogen and liquid fertilizer.  There had been corn planted here last year, ravaged by raccoon.  We added a leaf mulch to test it against the straw we typically use but between the two a little nitrogen was required.  I still have some room to expand and a pile of seeds.

To the left is another cattle fence with tomatoes, peppers and tomatillos.  Below that is a separate bed with the onions and what should have been garlic.  There are mole hills everywhere the garlic was planted, and so far no sign of garlic. 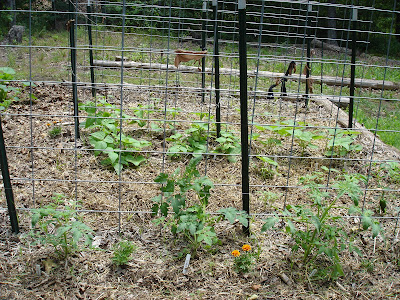 The rutgers tomatoes are in the foreground with beans and cukes following.  They will grow up the cattle fencing which allows us to tie off the branches and vines.  The beans are growing where the tomatoes did last year and should add nitrogen back into the soil there. 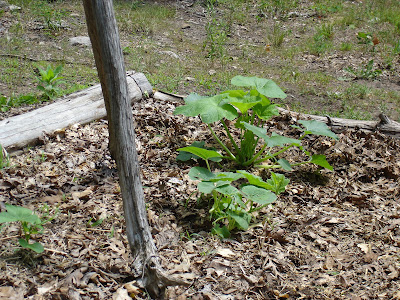 Squash is growing where the pole beans were last year.  I may need to move squash next year to a non-mulched area to keep down the squash bugs.  I planted some nasturtiums on the pole but have not seen any development yet.

On the lower bed (not pictured here) we have planted watermelon and pumpkin. Our small side garden has produced wonderful spinach, lettuces, snap peas, chard and some pretty hearty tomatoes.   The spinach salad has been super. Last night supper was a mixture of spinach and romaine, sliced cold chicken breast, black and green olives topped with mozzarella and some Italian dressing.

The most amazing thing was the bean plants that grew where I had dropped the package.  They were just laying on top of the straw but a few must have slipped through some holes.  Now several beans plants have popped up, all by themselves, not even in dirt.  That says a lot for the seeds!

Linking to Country Homemaker Hop and Made From Scratch Blog Hop


Posted by Kathy Felsted Usher at 9:11 AM

I'd never thought of drying greens, until I read one of your posts.

Oh yes! I've seen recipes for dried, seasoned greens too where you can just eat them plain. I will have to try that too.

I won't store them in this bag, they are just temporarily there. I don't want to completely crush them.

One of the vendors at the Farmer's Market last year had dried, seasoned kale chips, they were soooo yummy! Love your garden update! :)

I've never dried greens either--will have to try that. My convection oven has a dehydrate setting--so as long as I am not baking, I can have something in there...

Thanks for this post! Reminds me to get my dehydrator out and I am definitely going to try dehydrating greens.

Now that you have used that dehydrator would you recommend it? I am searching for one to buy.

Absolutely! It's more powerful and roomier although I intend to have both running full time if the garden turns out as I hope!