Moving Day- It's for the Birds 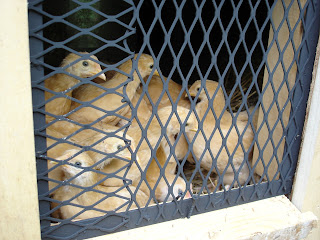 The day has finally arrived, moving day.
We're empty nesters once again.
They only appear to be in jail.
They're really good birds, not chicken thieves!
This is their "window"
so cool air can circulate in the coop.
There's one on the other side too.
The existing one is interchangeable with a wooden panel,
we're not finished here yet. 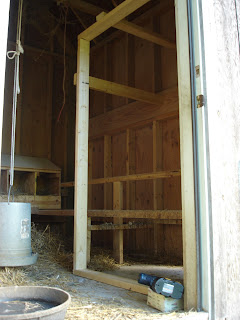 We had to introduce the new gals to the flock,
safely,
so they won't get pecked to death.
I imagine it could still happen, it's happened before.
My husband sectioned off a part of the existing coop
splitting the roost section. 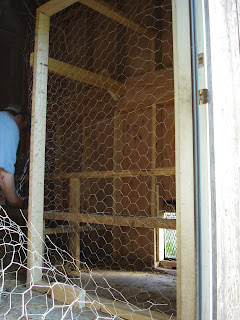 He wired it all around, and across the top.
He made a new door out this side,
these guys will have their own yard for awhile.
Eventually the chicken yard will move to this side
and a garage/shed will be where the yard
is now, something to hold tools and
chicken gear. 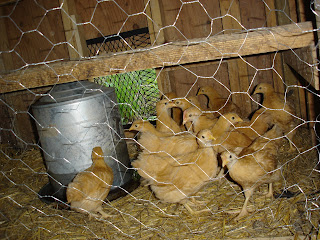 The move was scary!
I had to transport them, a few at a time, in a box.
Nooooo, they did not like that!
Then we put them in their section and let them get used to their
surroundings.
See the watering tank? It was an old one stored under the coop.
It was crawling with wood roaches.  My husband said,
"take this into the yard and let the chicken (old ones) eat them."
Great, I get the roaches!
Not for long, those chickens are FAST.
I think only one scurried away before it was
swallowed up by a hen. 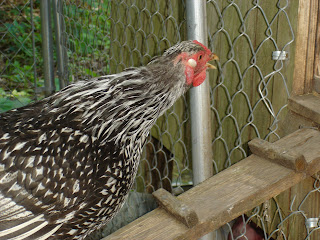 The older chickens were stranded in their yard until
we were finished with the interior changes.
They kept tabs on the goings on.
See her expression  "WHAT is going on here?" 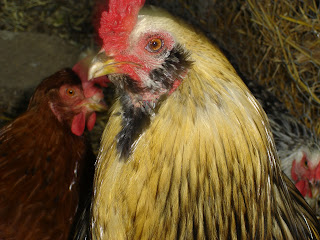 I thought the rooster would be more aggressive.
No, not at all, but decided to give us  a crow or two. 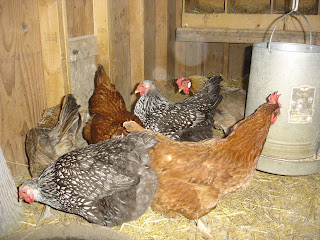 Soon the older chickens were allowed back in.
They didn't seem to notice much,
until they tried to roost.
Huh?  Where's MY seat? 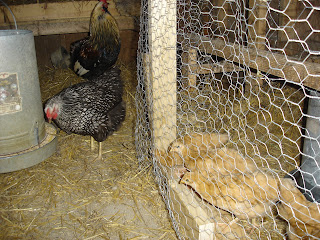 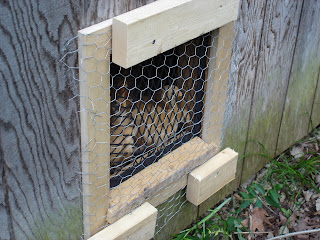 I asked my husband to reinforce the metal grid.
I know nothing can get through it,
we've had them for years; however,
just to make sure.
These are my babies after all. 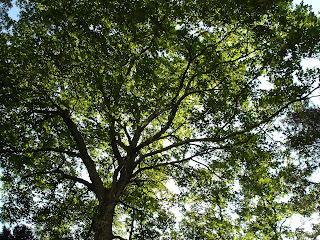 There are big trees around the coop so they have plenty of shade.
The little gals will be left in the coop until next week.
We want them to get used to their surroundings
and the other chickens.
Then they will have a separate run until they are a little bigger
and can hold their own.

I hope I get a call tomorrow telling me they all made it through the night!

I'm sure they will be fine! Looks like they have a nice new house! :)

Great coop! I know you're relieved to get your chicks all moved out there.

Looks like a really nice set up. That rooster of yours must be crowing because his harem just got increased :)

The gals are loving it- they are playing, flying up to the perches, chasing each other around and looking out the window. They are VERY interested in the older birds. One of ours might just be a rooster. It's a bit larger, looks like it has the start of spurs and the comb is much more pronounced.

I did something similar. Our younger chicks are in a separate coop and run, but they are right beside each other.

I'm sure your chicks will be fine. I bet they are loving their new home.