Salad from the Garden 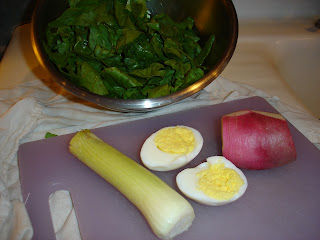 A yummy mix of spinach, butter crunch lettuce along with some very young romain.

Much more nourishing than iceburg lettuce, and grown in the little side garden. 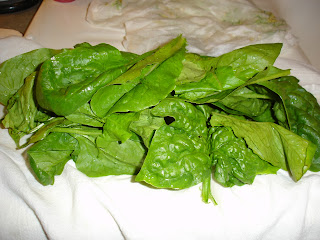 I used our gargantuan radish, taking care to pluck it from the root rather than grabbing the thorny stalks.
We also had an onion that over wintered.  It never developed a "ball" at the end.  I'm going to move them to a place where the soil is more sandy.  The onion was SWEET!
Unfortunately the eggs were store bought, we at the fresh ones for breakfast.
The older girls are starting to step up the egg production so that will change, especially when the chicks are old enough to lay. 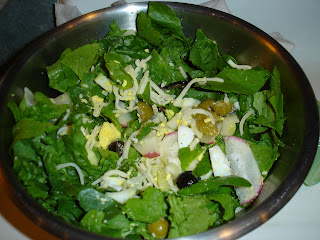 I added some olives, both black and green plus some cheese.
I looked into an olive tree but it won't grow in our zone.

We used a Good Seasons Italian salad dressing packet.  Does anyone know how to make their own packets using homegrown herbs and spices?
We used apple cidar vinegar instead of the recommended white.  It was so good!

Pizza completed the meal, after a day of planting in the big garden.  More on that later but we'll eventually have several different varieties of heirloom tomatoes, assorted herbs, tomatillos (if luck in on our side), squash, green and red pepper, beans and cucumbers.

Linking to Made from scratch blog hop number 11

There's something about seeing "yummy" and "spinach" in the same sentence that reeks of pure evil!

Having said that, the deviled eggs look heavenly! (Go figure.)

I don't know how to use herbs and spices at all, for the most part.
I wonder if hubby would eat anything but iceberg if we grew our own?
Will think about that. Your salad looks great. :o)

What a beautiful salad! Isn't it fun to be able to get dinner out of the garden?!? :)
I found a recipe for a homemade Italian dressing mix on Allrecipes and it was even mentioned on another blog as being good.
http://allrecipes.com//Recipe/italian-dressing-mix/Detail.aspx

That would have been me! My husband likes all the other types that are actually good for you but I grew up with iceberg. It's still my favorite but I can't grow it so for the most part it won't be purchased while I have it in the garden.

I'll have to look for it. We've decided we are going to try to avoid buying anything from the grocery that we can make here. I don't have fields so I can't do wheat or anything like that but we sure can do a lot with tomatoes and all the other vegetables we're growing!

I have salad making in my garden also. I just love going out there to get what I need. And the flavor is so much better.