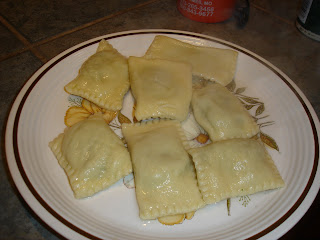 My husband loves to cook which works out very well for me. He cooks, I clean. Today my dinner was one of our all time favorites but with a special spin- soft raviolis made with our own processed pork and venison. This photo is without the sauce. He has a wonderful marinara sauce recipe but we are hooked on Louisa's- a nice meat sauce made locally in St. Louis. 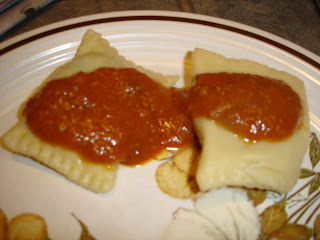 Our recipe is based on Charlie Gitto's, a restaurant on The Hill. Here are a couple with Louisa's sauce on top. These can also be fried- made into toasted ravioli which is a St. Louis staple, but we have not tried that at home yet. Louisa's makes some fine frozen toasted ravs (or T-ravs) so we generally pick up the very large bag for deep frying. Most are oven ready now and really, not the same at all. 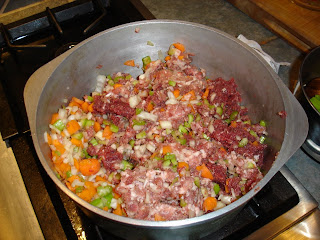 My husband roasted the meat and vegetable mixture. 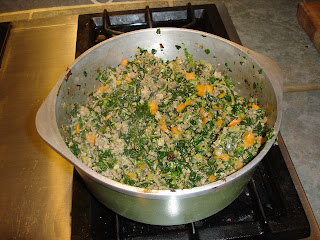 Then added the chopped, cooked spinach. 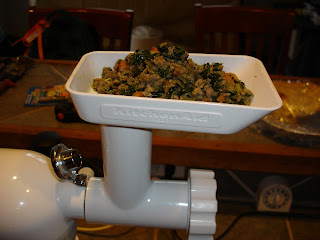 He put it through the meat grinder three times. . . 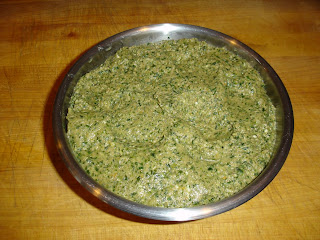 reducing it to a paste. 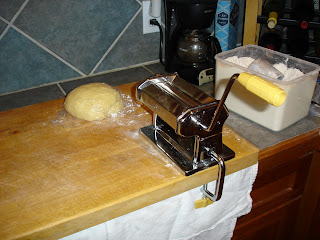 He made the dough and let it rest. 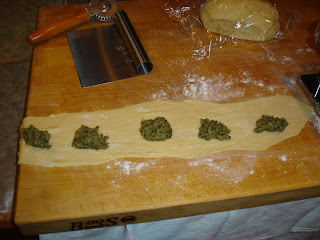 Next he rolled out the dough into strips, preparing the filling. 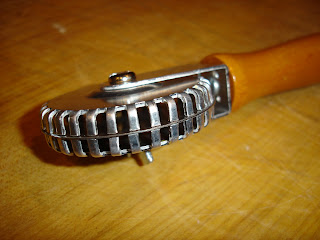 Then they were cut with the ravioli cutter which both cuts and seals the packets. There is a little cutting blade in the middle of the two outer edges. He recommends purchasing special tools for Italian cooking at an Italian store. Our press is from Italy (Viviano's, see link below) and the cutter as well. He says, "don't buy bocce balls at a Spanish joint!" He has a set he has been drooling over. He has some Italian in him, his great aunts and grandma were the Figone sisters from Stanton, MO! He says the Italian influence in his cooking balances out the Fish Pudding from my Danish cookbook! (No, we have not tried that yet . . . yet) 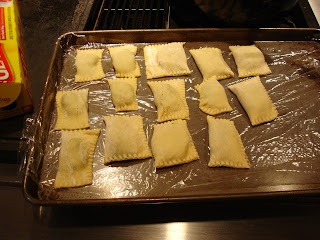 Into the freezer until nice and firm. When I got home he boiled about eight of these, they were probably a bit too big but very filling. We didn't even have a side dish with them but the veges were included in the middle!

He says that this is what you call Fast Food out in our neck of the woods, if you don't count the eight hours of prep time! It is a pretty involved process but if you have two people working together it goes much faster. We make a lot of these and freeze for future dinners. It is common for Italian families to get together and work all day making the raviolis.

Here is the recipe if you'd like to give it a try. I also have links below to some of the places on The Hill- they do have on-line ordering and recipes!

To make the dough:


To make the filling

Directions
For the dough: In a large mixing bowl, add all of the ingredients, and mix until the ingredients come together to form a dough. Turn the dough out onto a floured surface, and knead until smooth and elastic, about 10 to 15 minutes. Wrap in plastic wrap and set aside.

Preheat the oven to 350 degrees F.

For the meat filling: combine the venison, pork, onion, celery, carrots, salt, and pepper in a roasting pan and roast until cooked through, about 1 hour. Let cool.

Add the spinach, then grind ingredients in a meat grinder with a fine grind. Add the eggs and cheese, and mix well, to create a paste-like texture.

Place on a cookie sheet and freeze until hard if you don't want to eat them right away.

Remove from freezer and drop into boiling water until the raviolis begin to float.
Cover with sauce and sprinkle with Parmesan cheese.

----------------
We based our recipe off a St Louis favorite from The Hill which is a well established Italian neighborhood filled with bakeries, groceries and restaurants. You can find the beef/veal based recipe here.

Some favorite places on The Hill (some links have recipes and you can order products on line!)

There are so many more fabulous places here, too many to mention all of them, and some don't have websites. We live pretty far away from The Hill so we don't get there often, but when we do we're sure to pick up freshly made crusty bread, their olive salad, the wonderful cheese and garlic blend that bakes onto the thinly sliced bread to make a bubbly coating, tuna, pastas, etc. The groceries have beautiful gifts as well.

Viviano's
Di Gregorio Foods
Volpi Foods
Vitale's Bakery
Zia's
Rigazzis (the home of the fishbowl beer and the most amazing toasted ravioli, very different than what you buy in stores)

I have to mention my all time favorite restaurant for toasted ravioli, although they are not on The Hill. Rich N Charlie's is right up there. My husband and I have eaten there ever since we started dating back in the 70's when I was 14! All these years later they are still producing some fantastic toasted ravioli and one of the best salads you will ever eat- full of artichokes, red onions, Parmesean and homemade dressing.
Posted by Kathy Felsted Usher at 7:14 PM

Those look fabulous, Kathy. What a blessing to have a hubby that likes to cook! :o)

Yes, it is but I used to be thin! He's a carpenter and in our area that's not a good thing to be right now, lots of down time; however, he has been making good use of it by getting certified through the Red Cross for setting up emergency shelters, CERT and FEMA for disaster preparedness, got his ham radio license, cooks and does laundry too!

Oh wow Kathy,
Those raviolis look soooo good. Your husband has so much patience to prep and grind it all three times. Eight hours to make is dedication, for sure. You are a blessed woman, and a very special lady too. I wish I could eat over at your place. Thank you so much for sharing the recipes. I AM gonna try this when I get some venison.

Wow is right. That looks and sounds delicious.

If you ever happen to make a wrong turn and end up halfway across the country in tiny Robertsville, look us up and we'll have some for dinner! Then Matthew can join Taylor up by the bonfire to roast marshmallows.

Hi Kathy~ Well I'd say I'd try your recipe but I'm a vegetarian! It does look yummy though.

Sounds great! Thank you for your kindness.

Oh, not to worry! Substitute riocotta and spinach or potato and onion like we use in our pieroges. I think a fruity filling might be fun (but not with a red sauce). Your daughter's pasta looks great!

Dang, I'll bet those raviolis were SOOO good! Lucky you for having a hubby who likes to do stuff like that! :)

Hi Kathy,
Those look absolutely delicious! Slow food at it's best! Hoop House: We haven't erected ours yet .I'm still deciding if I'm going to order one pre-made or build from scratch... I'll keep you posted!

It's hard not to like ravioli. I must be the only person in St. Louis to have never eaten the toasted variety though. I may have to find an Italian wife someday who can make it right. I mean, as long as she doesn't have more hair on her chest than me. (I've heard rumors about Italian women, but if she cooks well enough, I may be willing to look the other way.)

OK Yahoo- better get at it! I think it might be a requirement so don't let the authorities find out. About that wife, I work for a company that makes razors and blades, I'll send one over if need be.

Your ravioli look wonderful !!! Thank you for sharing your recipe.