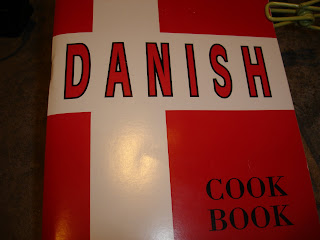 My blogger friend, Michelle had a giveaway featuring a Danish Cookbook from her visit to Solvang, CA and I WON! I'm so thrilled because I am half Danish, my dad being full Dane and the only sibling to be born in the United States. I really don't remember my grandfather, my being so young when he passed away. My grandmother was bedridden most of my life, I only remember her walking to a chair once in awhile. My aunt would fix the Danish dishes; however, both she and my uncle are no longer with us so I had only one recipe-- a Christmas bread. Now I have a chance to explore some of my heritage. 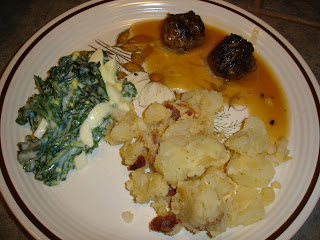 I will show you our first meal, thanks to some very BIG help from my hubby, Tom, who is a much better cook. I should have taken a photo of his plate, it was prettier (and more full). I tend to work in courses, not by choice but because I have very poor timing skills when it comes to meal preparation. Even my boss has tried to teach me using the white board in his office, laying out the various dishes and what should be prepped when (LOL). Tom was the coach on this one! I chopped, mixed and gathered ingredients. He was in charge of the stove top. 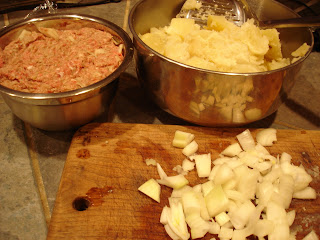 I'll post the recipes below but here we have the meat mixture, both pork and beef, with a hint of clove! That was something I didn't expect. It must sit for three hours, then you form meatballs and fry them in lard. You remove them from the pan and make a gravy which you pour over the meatballs. The gravy is not written on this particular recipe but is called out elsewhere in the book. I'll add it to the instructions below but take note: 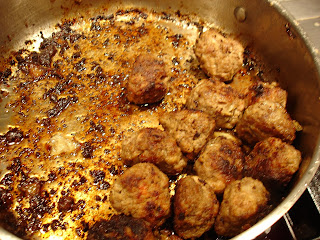 The potato salad was prepared differently as well. You boil the potatoes with their skins on (they refer to it as their jackets- I like that!) and then remove the skins while the potatoes are still hot. Set them aside and then you cook your onions in bacon grease. Add the vinegar and sugar as you might expect but then, just before you serve it, you add mayo and celery seed! Since we cooked bacon for the grease I went ahead and crumbled it into the mixture. I do think I had too many potatoes. It calls for large, but I believe I picked up mammoth. You could cut this down for only two people. We have many more meatballs than pictured as well but they are perfect for leftovers or to add to other dishes. We can vacuum seal them so they are ready on demand. 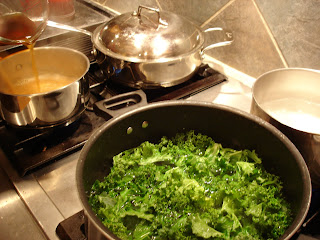 (The gravy is cooking, meatballs are covered and the kale is being prepared)

Next came the kale, which I have never, ever purchased before so I hope I prepared it correctly. It says to cut out the stalk so I just took the knife up both edges to remove the curly leaves. Then I chopped them in pieces, but not too small because they will reduce. This should be the last item you cook. You have to be fast with this one and the eggs in the ingredient list should be boiled already but still warm. It is good but we may add some nutmeg and a little cheese to it next time. My husband does this to creamed spinach and it makes it even more tasty. 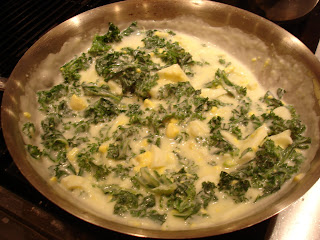 I made one huge mistake- I forgot the breadcrumbs. I thought that would be OK because I had some at home; however, they are Italian breadcrumbs which I had to use for the meatballs. These were also supposed to be for the AEblekage (Apple Cake) and I didn't think I should go forward with it, particularly when the recipe said the breadcrumbs were the key to success. This will have to be for another night.

My cookbook had arrived while I was at work. My husband knew I was looking forward to it so he e-mailed me and said he opened it to take a peek. He was amazed that the girls in the photos look like me over the years. When I arrived home I confirmed it- it's me all through this book, the Danish features. I showed my brother-in-law, who I have known since I was in 2nd grade and sure enough, it's me! Amazing. I'll have to dig up some old photos and scan them in sometime.

Combine meat and bread crumbs, add egg, onion, pepper and flour. Add milk a little at a time and mix. Let stand 3 hours and then add the salt and mix again. Form into small meatballs and drop into frying pan with lard browning until cooked. Remove to a warm dish and prepare the gravy.(After removing the meatballs, add 2 tablespoons of the grease and 2 tablespoons of flour stirring as you would to make a roux. Then add the two cups of bouillon. Pour over meatballs.) Pour the gravy over the meatballs and serve.

Boil potatoes with jackets on. While still hot, remove skins and cut into small bite sized pieces. Melt bacon grease in a skillet and add the onion, cooking until clear but not browning it. Add the rest of the ingredients which should quickly come to a boil. Pour over the potatoes and stir to mix. Just before serving, mix in 2 tablespoons of mayo and the celery seed.

Remove the large center vein of the kale.
I chopped it first so it would fit in the pot.
Cook kale in salted water until tender.

Melt butter in a sauce pan and stir in flour.
Add milk gradually and bring to a boil.
Cook until thickened.
Stir the kale and chopped egg into the white sauce.
Serve immediately.

Wow, what a great post Kathy. That plate of food looks yummy and your photos of the meal prep are awesome. Michelle is gonna be so excited to see you posted the recipes too. Have a great night.

How awesome! You were the perfect one to win the book! :)
Everything looks yummy! I purchased kale for the first time last year. Isn't it funny the things we DON'T eat much in this country anymore because it isn't "readily available!"

YUM! We had a Danish exchange student back in the 60's who has remained a big brother to me. Frikadeller was a big time favorite!! Who published the Danish cookbook? The ones I have are in Danish....and my Danish is bad to really bad with the "fading" English translations written in the margins and are hard to read. My husband's grandmother is Danish so this would be a treat! Thanks!!

The cookbook is from Solvang, CA Danish Days. It shows an address to obtain additional copies
Steve Solum, 234 East Highway 246, Suite 108, Buellton, CA 93427. The city's website is http://www.solvangusa.com/contact-us/
Perhaps they know how you can order one one line. It's a paperback cookbook with about 60 pages of recipes, photos and in English.

Everything look so good. I am so glad you like the book.

Not only was it good the first night the leftovers were fantastic the second night. I got the bread crumbs so I'll have to make that apple cake now.

Looks awesome... glad I stopped by.

What a great win! It will be nice to discover some foods from your heritage.