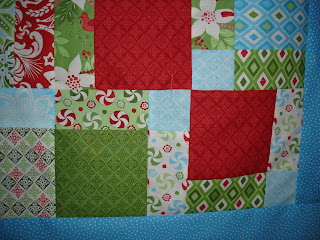 What a week! I have been finishing up my shopping and giving the house a super cleanings in preparation for holiday guests which will be arriving in a few days. We had friends over for a Christmas food party--everyone bringing their favorite snacks to accompany my husband's homemade pizza. In between I've been trying to finish up my projects and I'm pleased to say I completed the pieced top today!

I used Moda's Flurry charms (see previous post) using a disappearing nine patch pattern. Then I selected a border, the backing and red for the eventual binding. 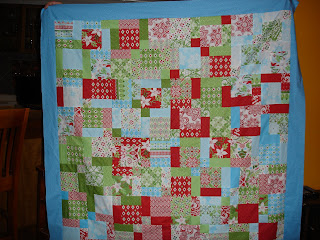 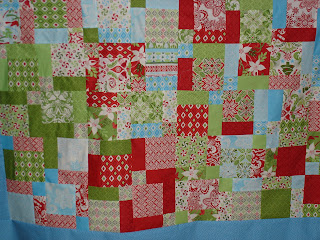 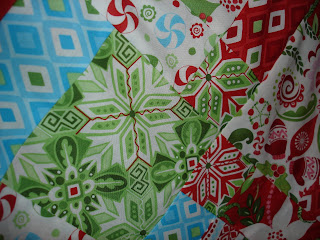 Cutting the nine patch in half both ways, turning opposite corners and sewing them together makes it seem like there is much more piecing than there really is. The only thing I can caution you on is to experiment with the direction you press the seams. Swiveling them and then arranging each new square can cause some pattern conflicts. You'll have to move them around until you find the proper placing, but that might mean the seams are pressed the same way. You can repress or just work through it. It's not bulky enough to worry about. 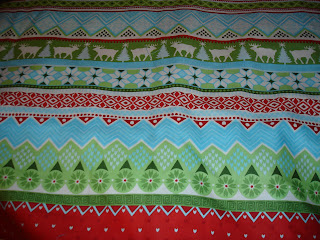 The baking is also Moda Flurry yardage. I thought it would be nice for the entire back since there was so much going on within the pattern. 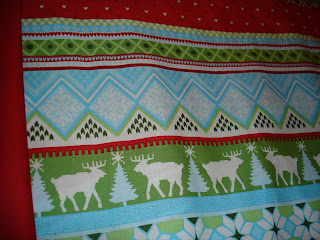 I selected a nice red for the binding. 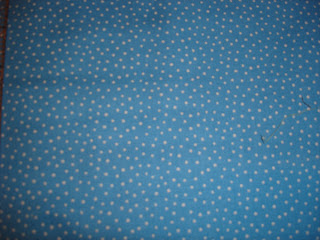 I had some help selecting the border. There is so many patterns that I wanted to pick up on the blue so it wouldn't limit it to only Christmas; but rather, winter. 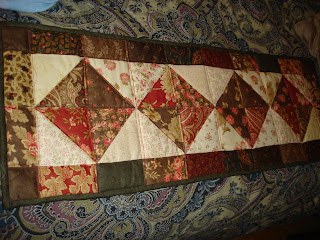 I also got the binding on Mom's table runner which will match the kitchen gifts I purchased.

I still have to figure out something for my son who I just found out is flying in from Seattle but after Christmas due to a conflict with the kennel. It didn't leave me enough time to select and ship anything in advance. He's a guy and hates to check luggage so he will be bringing a carry on which means he won't be carrying anything back with him that's large. If worse comes to worse, I'm sure gift cards will fit!

(please disregard any overlooked strings. It's funny how you look something over and over but find out you missed something when the photo is enlarged!)
Posted by Kathy Felsted Usher at 7:08 PM

I love how the Moda Flurry Charm quilt turned out. What a beautiful top! Have a Merry Christmas.

The pattern and colors look great. I haven,t even come close to finishing my mother-in-laws quilt. I had to send her a Christmas card with an IOU. She laughed and said that was the first time she ever got a IOU for Christmas. I told her there is a first time for everything.

Wow, that turned out beautifully! What a great job!