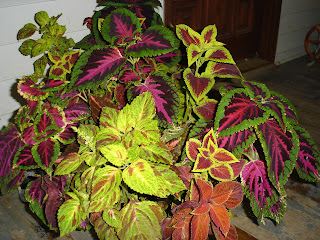 It took only a brief second or two, in fact, I wondered what the commotion was all about. I was right there, in fact, I had just walked across the porch, down the steps and over to the hose bib that is in the corner of the planter bed. Giant lizards scurried about, sometimes startling you. Really, you would think they were mice by the sound of them.

When I reached down to turn on the water, I heard the noise. "What's that?" I wondered, "It sounds like metal hitting the porch." I shook my head and carried on. We have a few stray cats, they must have been chasing each other . . . but in this heat?

Well, I went about my business. I watered the hosta and coleus bed next to the porch and then onto the potted plants: tomatoes, peppers, herbs. Hey wait! Why is a pepper plant uprooted and laying across the planter? Hmmmm. No matter, it wasn't doing very well anyway.

The bushes were next and a few young zinnias that were beginning to bloom in the retaining wall bed. Oh oh- weeds, the vining variety- I need to get in there as soon as this sprained foot will allow it! (and the wasps, don't forget about them too- hiding out under all my bedding plants).

I made my way around the court yard until I came back to the porch. Time to fill up the cat water dish and hit the porch plants with a little water. It's so hot that even they, under the shade of a 9 ft deep porch with ceiling fans on, droop every day.

"What the heck!" I said aloud. "What happened here?" I know what the metal sound was, this is all starting to make sense. Those raccoons got my coleus on the porch! They don't want the plant but apparently whatever they believe is beneath the leaves way down in the dirt. I had a metal dragonfly stake, a very pretty little garden decoration, in the middle of the pot with all the pretty leaves surrounding it. Guess where it is now? Yep, on the deck. On the deck amid half a pot of dirt and various coleus plants, some painfully damaged. I guess they got my pepper too. And of course they had a dance party in the cornstalks growing in the big garden.

I scooped everything back into the pot and over watered, hoping for the best. Since I caught it so soon I believe most of the plants will be OK, but one was still touching the ground awhile later.

With this heat, lack of rain, the horn worms, grasshoppers and raccoons the garden has suffered greatly. The cucumbers and zucchini are about done, although we had a great harvest. Beans and tomatoes are still growing, along with the pumpkins; however, the peppers have done nothing.

Our tomatoes are ripening but slowly, many staying green. This is some type of problem that Missouri is having. We planted heirloom varieties so it may not be affecting us as much as the hybrids out there, but they are definitely slow this year. I'm glad to have all those green tomato recipes I've seen on the blogs lately.

Back to the raccons digging in my plants. What are they looking for?
Posted by Kathy Felsted Usher at 5:25 AM

Recently all the potted plants on our deck were uprooted by raccoons. What a mess! And boy, was I mad....
I haven't had any problems since I interspersed my potted annuals with pots of cacti. I feel very smug.