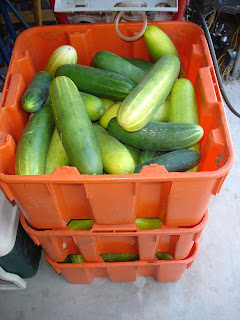 My husband told me he was bringing some cucumbers home from a friend's house since they had already put up 24 quarts of pickles, which would cover their needs until next year. Little did I know that I would find 70 lbs of cucumbers when I pulled into the garage!

Tomorrow he plans to start chopping cucumbers and preparing the jars while I am off to work. He's picked out a few recipes from the Ball book, all pickles and relishes. I'm very lucky that he enjoys this, probably more than I do.

Chopped up a half tub of cucumbers so far 25-30 lbs
Bread and Butter pickles- about a third of a turkey fryer pot. About 8 lbs.
Relish a full stock pot full - 2 gallons. It has used 22 lbs of vegetables so far.
Only 12 jars canned so far, it will take us awhile.

I found some cucumber bread/cucumber cake recipes that I will try and then freeze.

Anyone want a cucumber?

Lace up and Walk said...

If we were neighbors I'd come over and give you a hand:-)
Just an idea...Our church has a food pantry and they always welcome fresh veggies and fruit. Maybe you have one in your area that you could bless with your bounty?

Yes, we were just discussing that today. There is the Agape house in town and they handle food as well as household stuff and clothing. I may swing by because we're on hour 9! Just finished relish and putting the bread and butters in the water now.

Greetings from the Amish community of Lebanon,Pa. Richard from Amish Stories.

Hello Richard. Love your blog- love the Amish too, such self sufficiency. I wish I had half their knowledge and skills.

"Anyone want a cucumber?"

PS, when you get an ice-cream maker, give me a holler.

My neighbor has one of those fancy ones that you keep on your counter top, expensive but fast. She whips up ice cream for dessert all the time. That might be too dangerous for us!

Nice. My mother offered me cukes from her garden this morning and I forgot to take them...lol. By the way i've got another blog on the hurricane, different from the one you kindly commented on earlier.