Winding Down, Gearing Up 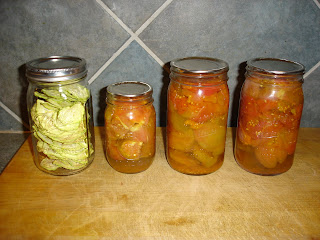 Our zucchini plants are starting to wind down the season, suffering through the last month of super hot temperatures and minimal rain. We have at least a dozen bags of frozen shredded zucchini in two cup increments which should give us plenty for the winter along with the jars of relish we made. Thanks to another blogger's suggestion we dehydrated the last zucchini but mixed up the topping with a combination of salt and Tony's Cajun seasoning for a little zing.

This is the first of the canned tomatoes. We planted heirloom varieties that don't have much shelf life so frequent canning is important. The little raccoons have decided to invade them as well as the corn (and flowers!) so we pick them as quickly as possible even if they have to sit a couple of days to deepen their color, although they are not supposed to be all dark red but a rainbow of reds to purple. We'll do some whole but other will be seeded or made into a sauce. 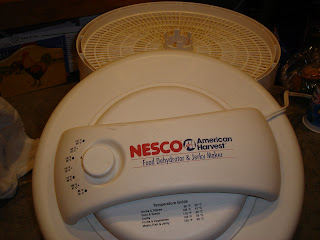 Posted by Kathy Felsted Usher at 5:27 AM

I'm not sure that this has been a good garden year for many people. Mine has suffered from the heat and getting sprayed with herbicide. It's also been a bad year for rodents around here~lost most of my chickens to raccoons. I think I'm actually looking forward to fall.

We had that problem with raccoon break ins too but we installed a square dog run outside the chick's door and buried chicken wire underground. The top is wired too, completely. Still, once in awhile they find their way in.

Good to have the warning that raccoons might raid the tomatoes as well as the corn. We have a family of four (plus mom) who come by every evening to check for kitty food. I'm waiting for them to find the sweet corn!

It's such a good feeling to preserve some food for the winter, isn't it?! While it hasn't been a great year for us, we've had a better garden than last year, so I'm focusing on that! :) http://homestead-for-sale.blogspot.com/

Yes it is! Our garden did not perform as well as it should, except for the zucchini!!! Lots and lots of zucchini. I'm glad I like it.

The spring was wet and cold, then we jumped immediately into a hot, hot summer. I believe the 5th hottest on record for our state. We can't water enough. I am just thankful for anything we were given.