Hey There Mister, Do You Have a Mop Refill? 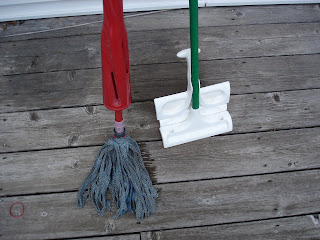 Hey there Mister, do you have a mop refill?

I like the red mop with the stringy, floppy mop head but it really doesn't scrub so well, especially after canning when you might not have been as neat and tidy as you should have been. Plus, you have to replace the heads pretty often if you get into some messy jobs. My husband likes the green mop but wants a real sponge type head on it, not the cellulose kind. Also, I don't want added perks like brushes or strange stuff attached to it. So a standard mop it is.

Every time I get a mop they stop carrying the refills so I decided to buy the mop and oodles of refills, thinking that might be the smart thing to do. We went to a big box store, the kind where you can get groceries, clothes, camping equipment, swings and sandboxes all while you get your oil changed. They will have a mop, they have Everything.

They had a nice squeeze mop with just the perfect head. But no refills. None, at all. They had a nice refill but guess what? No mop that fit the refill.

So, onto the discount dollar store, the national kind that carries name brand things. They will have a mop, they even have clothespin bags. And they did have mops, Mr. Clean mops, and a lot of them. But guess what? No refills, except for, like the first store, a really funky one that seems like it will break or at best not ring out well.

I even got "the guy" in charge of that department and he said, "No, no refills were shipped. I'm still waiting for them." This does me no good at all. What if I buy this great mop and they don't stock the refills? He handed me a string mop. Said this is what his mom used to use. I didn't get a mop.

Why can't I get a mop? Just a plain old mop where I can always find a refill. It doesn't seem to be too much to ask. It shouldn't be this hard. I guess I'll try KMART tomorrow.

She's on yet another crusade, determined to end all the problems in the world of mops. Invective's will fly - letters will be fired off to those responsible for this outrage. And America will sleep easier knowing that the great mop imbroglio is well on its way to an end.

I've been trying to get her to watch "The Caine Mutiny" for years, you know, the movie where Capt. Queeg sits before the judges, impulsively rolling ball bearings in his hand, recounting the ordeal of the missing strawberries?

She doesn't think that it's something she'd be interested in.

I've had that same problem. A good hardware store might have them. I know supermarkets clean the floors with refillable mop heads. They must exist somewhere.

I think they would rather sell you a whole mop than just the refill. Sad.

KMART, refills, no handles. Butterfly mops don't wring out the dirt except in the middle of the sponge.

Dollar General in Pacific, They don't carry the refills for the Mr Clean mop (roller mop), the Mr Clean mop with oversided sponge does not work, the head pops off every time you wring it, even the salesperson was surprised. They had a bunch of $1.50 mops but the heads were not attached well, already peeling off so not those either.

I'm going to try Ace Hardware next. If that doesn't work, I give up. I'll strap two sponges onto my feet, jump into a bucket of water and skate across the floor.

BTW, my house is all hardwood- except the bathroom floor, both floors. No carpet-- so I need a mop.

Go to a restaurant supply store or a business supply store. Get a nice industrial mop. It really is the only way to get a mop that will last and have refills for it to. And BTW your not alone that has always been an issues for me also.

I hear ya sista!!! You wouldn't think it would be so stinkin' hard to fine this common item...but it is. ggggrrrrr :)

I finally found one, next step was going to be a janitorial supply. I did e-mail WM and let them know I was unhappy with their product line. She actually called me and said she was going to get her team together tomorrow and look at the inventory. She did say that sometimes the vendor sends an assortment pack that may not have enough of everything but they will look at ordering refills.

Everyone should e-mail them. It's not Wal-Mart.com. Rather, you have to email
Wal-MartStores.com to get to corporate.

I've had the same problem. Looks like I'm not alone. You buy a mop. Use it till the head's down to nothing. Go back to the store for a refill head only to find that no one has the mop, nor the refills, anymore. Now I just buy the cheapest mop I can find and toss them when the head dies.

Manufacturers are the goofiest people in the world. I'd like very much to know why the people who make Arid deodorant decided to make it smell exactly like body odor for a few years (after having had the best deodorant on the market for decades). Now they seem to have finally gotten back to the original formula. Maybe I wasn't the only one to send an angry email? Really, why on earth would you purposely make a deodorant smell like B.O.?

LOL, who knows! I prefer Mitchum (ladies). It's the one that you can skip a day and still be protected- but I never skip a day! I'm not that trusting.

The cheapest mop I saw was at Dollar General. I don't think they make refills though since it's only $1.50. Not so sure how well the mop head is attached but at $1.50 you can throw lots of them away.

I think I'll start saving the handles and making something out of them.

I have had the same issue... I finally broke down and bought the shark steam mop-- it has washable microfiber cloths! Best $80.00 I have ever spent!! And I have had it 4 years!!!