It's an incredible new ice cream flavor- Crunchy without the nuts! What's the secret ingredient?

The first batch of the ice cream was so popular store employees didn't even have a chance to put the product in a display case before eager customers scooped it up the night before its official on-sale date. Customers hoping for a crunchy taste "bombarded" the store the next morning, only to be disappointed, said employee Christian Losciale, who helped create the concoction.

Sparky's Homemade Ice Cream contacted the health department after it sold out of its only batch of the insect-filled snack within hours of its June 1 debut. Employees collected the bountiful bugs in their backyards and removed most of the dead cicadas' wings but saved some for texture's sake.

The cicadas were fully cooked by boiling then covered in brown sugar and milk chocolate. The base ice cream is a brown sugar and butter flavor. The store was going to make another batch for the weekend, but a sign on the door told customers it won't be back until 2024.

Seems like the City of Columbia/Boone County Departrment of Public Health and Human Services couldn't find the proper cooking temperature guidelines next to its listings for beef, chicken, fish and pork. "The food code doesn't directly address cicadas," environmental health manager Gerry Worley said. "We advised against it." 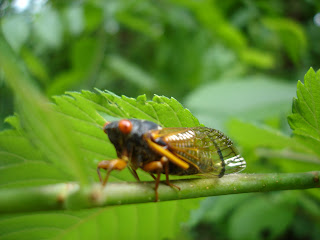 Ha! I just heard about this on the radio about an hour ago and I immediately thought of you! LOL, I was wondering if you tried it. I bet it tastes like chicken. ;)

No, I didn't try it. I don't think I'd order it but I might have tried a bite if someone had it. I don't mind them but I don't really want to eat them unless . . . . they tasted like popcorn! I can't eat popcorn anymore and would love a substitute!

I heard it on the radio today. Here they said, however, that the Health Department made them stop selling the stuff rather than just making the suggestion that they don't.

Personally, I think it's kind of hard to mess this up. When you see the grease bubbling in the deep frier, I think it's safe to say they've been cooked good enough.

In Japan they have raw horsemeat ice cream.....rather a unique flavour also!

Ymmmm, Richard. That's probably just about as good as cat!

Yahoo. I heard they "strongly suggested" they stop. In essence, yes, I think they made them quit. You're right, it's not too difficult to tell when a bugs all fried up! lol