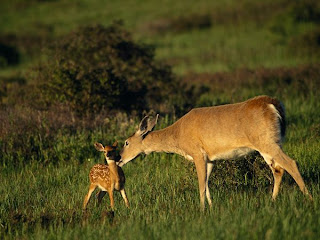 What do you get if you combine fishing line and red hazard tape? An effective deer barrier! Mama and little fawn have been ravaging our gardens snapping off both pole and bush beans, topping tomatoes and enjoying lovely salads at our expense. Short of setting up perimeter guns we searched the homestead blogs to find the best method that was also cost effective. Thank you, homesteaders!

Take a few T posts and set them around the perimeter of your garden beds where you have vegetation likely to become a deer buffet. Then string some old fishing line between each pole, about chest high to a deer. We have only one row but I understand a couple of rows, both low and high, will increase the probability of the deer, or other varmint, running into it.

Now, we have a hard time seeing this fishing line ourselves and there are children involved, so in order to avoid them running into it at neck level, I tied some red/orange hazard tape on each side. It's an eerie effect seeing the little knot with trailing tails levitating between the posts! Once the deer approach the line, that they can't see, they feel pressure across their chest which alarms them and they run off.

Our beds have cattle fencing tied up to T posts as supports for the tomatoes, cucumbers and other clingy vines. We also have a tree branch tepee constructed for the pole beans to climb. Between each cattle fence I strung twine and suspended a pie pan from a string. They are light enough to blow back and forth, spinning at times which creates an odd flashing that will hopefully spook the deer. I have another pie tin dangling from the center of the tepee. This one adds a little banging noise as it hits the tripod posts.

This garden is a large co-op garden with our neighbors that we created on our side lot, but we also have smaller gardens at our own homes. It must have worked because our co-op vegetables are doing well but they got the neighbor's garden so he promptly mimicked the perimeter setup at his place. We're pleased to report they saw the deer approach their garden and leave as soon as they bumped into the fishing wire. We have to protect our small secondary garden against the deer. Now if we can only find something as effective against the newly arrived Japanese beetles. 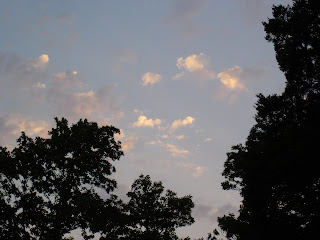 Posted by Kathy Felsted Usher at 8:23 AM

No deer in my neck of the woods (at least not yet, there is a possum terrorizing the neighborhood) but I'll keep this technique in mind for future reference.