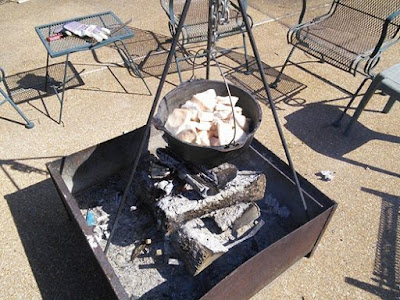 We had a slim window of opportunity while the weather was
nice, no snow, no frost and no rain, so my husband built a fire
in our court yard pit.  He added the tri pod and suspended the
cast iron pot filled with pork fat that had been in the freezer. 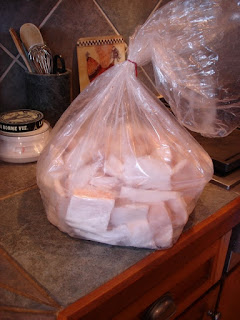 I'm not certain how much it weighed when we started
but we ended up with five quarts of lard by the time
we had finished.  Last time we rendered inside
the house which I didn't care for.  Our house smelled
like pork for quite a while! Not a pork steak sort of
pork smell, but a pig sort of pork smell. 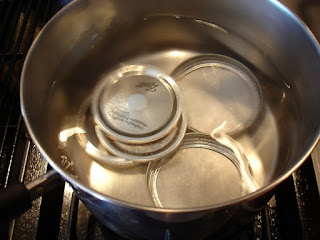 We pressure canned it a couple days later,
taking the lard out of the refrigerator and
reheating it so it would pour.

I was at work so he prepped the lids and kept
the jars warm in the oven. 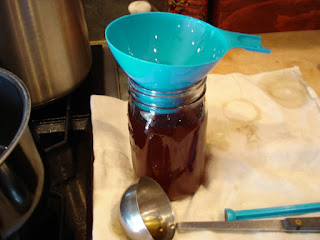 He filled the jars 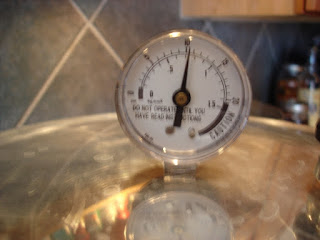 He got the pressure up 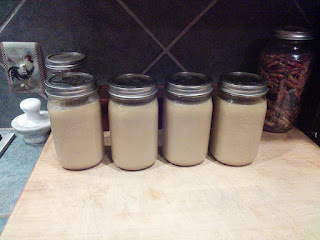 End result, 5 quarts of lard
and more room in the freezer!

I always wondered how you got lard. My grandparents used to make it but I never stayed around that long enough to see how. Thanks for sharing you ambitious couple! I've gone back to making my buttermilk biscuits with lard again now that I know the shortenings and some of the oils are just a step away from plastic. I enjoyed seeing how you do this!

Wow, that is neat, I think many chefs use lard as you can't get the same results with anything else. Supposed to make nice pie crusts. Lucky you kept the fat out of the fire as they say!

That was the first thing I noticed "Ah, smart lady. She's doing it outside:)" Lard is so nice for veggies (like stir-fry style.)

That was the first thing I noticed "Ah, smart lady. She's doing it outside:)" Lard is so nice for veggies (like stir-fry style.)

Loved the post! And your lard looks great, too. Congratulations! ^_^

I got a pressure canner for my birthday, but haven't used it yet. - Margy