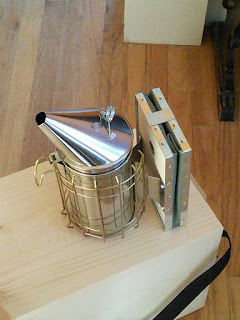 We are getting ever so much closer to becoming beekeepers!
Today the gear arrived packaged in three large parcels.
We have a new smoker 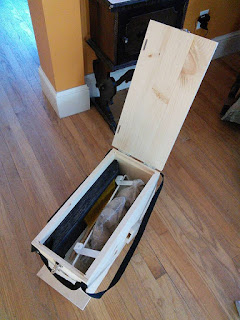 and a nice gear box that is now filled with
foundations, handles, brush and scraper and
a couple other things.  The smoker attaches to
the rear of the box so you can carry it all together. 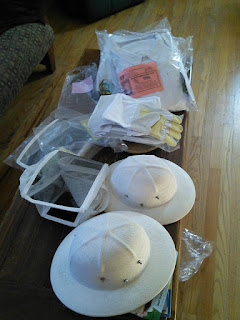 Then there are the hats and veils, gloves and suits, all
of which look much, much bigger than I anticipated.
We followed the directions on the sizing charts
but I am afraid mine is going to be pretty
long- I'm all of 5' 2" ! 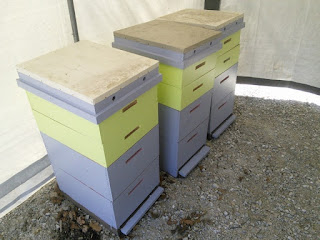 My husband got the cinder blocks to level up the hives
so we'll be working on that this week.
He gets the bees the end of April, just a few
days after our Cornish Cross chicks will arrive.

We're also adding meat birds to the mix.
We'll increase the size of their yard, segregating them
from our layers.  I've become increasingly concerned
about the cleanliness of store bought chicken.
This will be our first year to butcher but we do have
access to a whiz bang chicken plucker plus our
neighbors are going to try and coordinate butchering
days with us and set up an assembly line.

We will be pretty busy with the bees, the birds plus the garden.
And work too!

We still have some nights where it will dip to or below freezing
which means I won't plant too early. They say our last frost is
mid April but it's not true.  You are really never safe until May.

I have a collection of seeds ready, including this one
for the bees. They will have wild flowers and herbs in
addition to the zucchini and other flowers that will bloom
in the garden.   I will mix in a few that I purchase from
the nursery too so they have a head start. 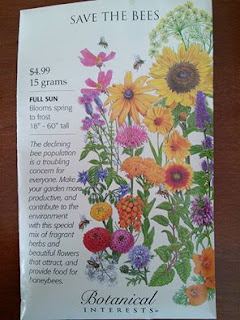 I really enjoyed bees back when I used to have them. I hope that you do also.

Take good notes please ~ we are still a year or two out from getting them (want to be able to tend to them properly) & might need pointers:)