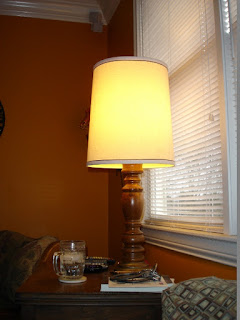 It could have been in a mystery novel,
the ones that start out with
A Dark and Stormy Night;
however, it was just plain DARK.
Not from a storm though, it was only the result
of two of the three "ways" being out
so our lamp was stuck on the 50 watt light bulb setting.

By the way, this is one of a pair, our first lamps
purchased over 30 years ago at Central Hardware
in Creve Coeur (St Louis) MO.
They are still going strong after a little repair
and this time it was my turn to learn
how to replace a three-way light switch. 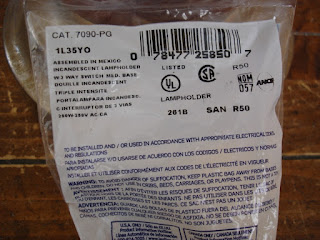 First you have to visit the hardware store and dig
around in a bin until you find a  three-way switch. 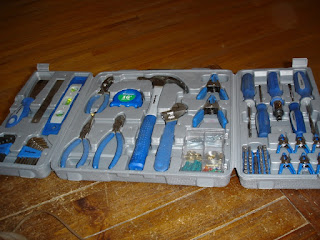 Next you get out your "girl tools" all in the handy dandy case
that was a Christmas present one year. 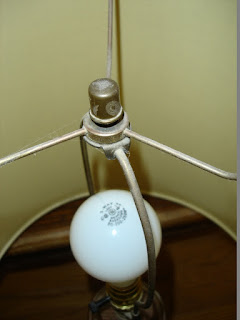 Most Importantly- UNPLUG THE LAMP

Then you sweep away the cob webs and take off
the thing that holds the shade on.  Remove the shade.
Make sure you keep the screw where it won't get lost or dropped. 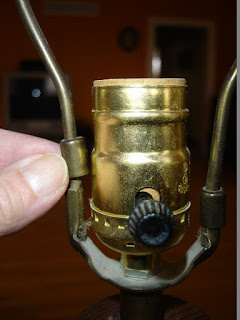 Then you pull up the things that help the shade holder
stay in place.  Slide these up on both sides.
They will slide right off so keep it flat and
away from any floor heat registers!
Then squeeze the two prongs so they release. 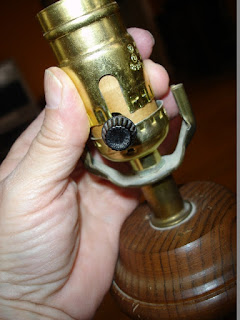 Pull off the top part that slides around the
twisty thing that turns on the light.

(Am I getting too technical here?)

Remove the cardboard tube as well. 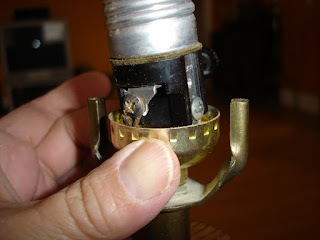 There will be two wires wrapped around screws. 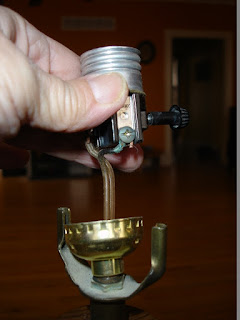 Pull the unit up to expose some of the wire. 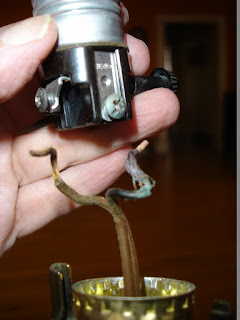 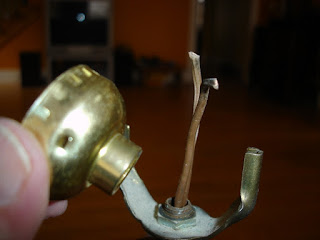 You have to remove the piece that everything was
sitting in.  There may be a little screw to loosen
so you can twist the base until it comes off.
If there is no screw, just twist and remove.

You may want to cut off the ends of the two
wires and start with fresh ends.  Just clip them off. 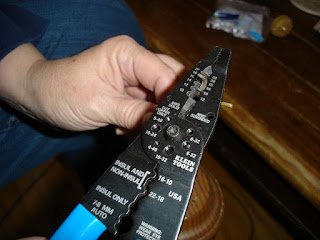 Then you will need to remove the wire coating
so if you have a tool that does this, use it.
You will have to find the right hole to use and then
twist the tool to cut into the wire.
Then pull up really hard. 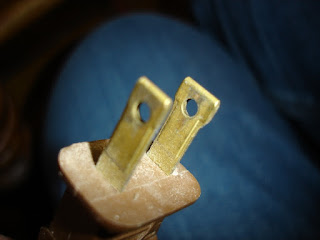 It's really important to know which wire to connect
to which screw so the power does not go the wrong
way and shock you if you touch the body of the switch.

The plug has two sides, one will be bigger.
The bigger is a return, which means
it goes to ground so you don't get shocked. 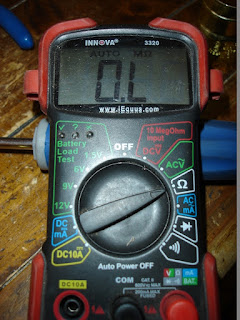 (Volt Ohm Milliammeter)
You can use a digital VOM to see which wire
leads back to the return side of the plug.

If you touch the bigger side of the plug
with one VOM probe and the other probe to one of the two
wires and the readout is zero  (0.00)
you have confirmed it goes to ground.

If it said OL, then you have the wrong wire attached.
If you were to plug it in and touch the metal around
the lamp switch you would get shocked. 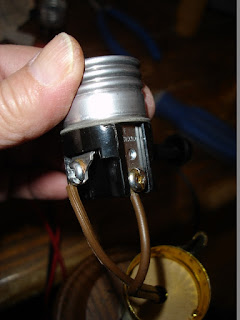 To tell which Screw to use, touch the
VOM probe to the metal base.
The other probe should touch the screw.

If it shows 000 then you attach the wire
from the big plug end onto the screw--
in this case, it is the big end to the screw on the left.

This means the other wire has to go on the other screw,
the one that is centered in the vertical metal strip
pictured above. 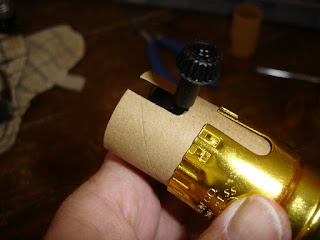 Once you have the wires screwed in you can
attach the new cardboard and metal jacket. 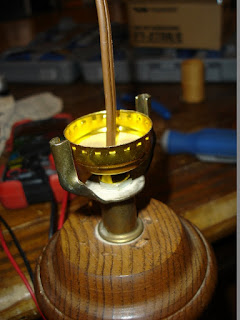 Put the new base on the lamp 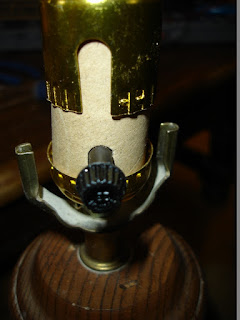 Slide the top into the base 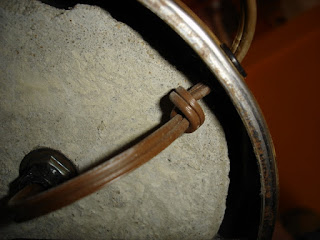 Pull the wire down so the new switch fits. 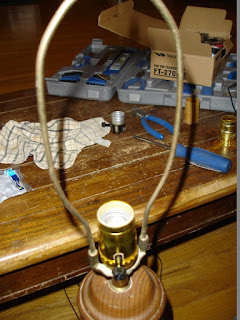 Plug in lamp and hope for the best!!

Disclaimer:  This was my experience, if unsure how to properly change out a lamp switch contact your local electrician.

That reminds me of some of the lamps my dad made for me on his lathe. He was so good with wood. I had to give away some of his pieces when we moved and it hurt! - Margy

Reminds me of a dumb blond joke. (I have one for every occasion!)

Q. What's black and fuzzy and hangs from the ceiling?
A. A blond electrician.

Incidentally, didn't your lamp cord have color coded wiring? Usually one side is silver (ground) and the other is gold (hot). And your new switch should have one silver screw and one gold screw. I think they're all like that now, but maybe yours is too old.

I was hoping that by using the meter she might come to understand a bit more about continuity and a little about tracing a problem. I think the end result might have been more confusion. But a guy's gotta try!

At the end of the day, the question your marriage hangs on is: Does your meter still work.