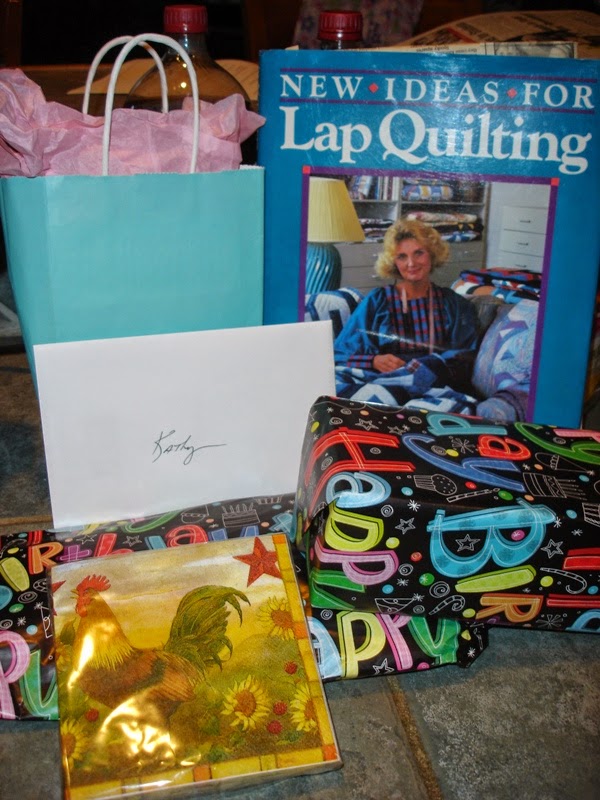 The Big 55!  I'm officially eligible for senior discounts
Yippee!
You can bet I already made a list and plan to take advantage of it. 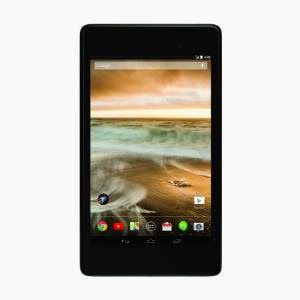 Well, may be a Nexus7.
I've stolen his enough that he thought I should have one too.
It will be great for watching tutorials as I am sewing
or listening to pod casts of my favorite NPR game shows!
Nexus7 image credit

As we were leaving for the great Birthday Breakfast,
the small parcel carrier was driving up our road.
Seeing that there are only a few houses on the road,
and I was expecting a package, we turned around and
met him in our driveway. 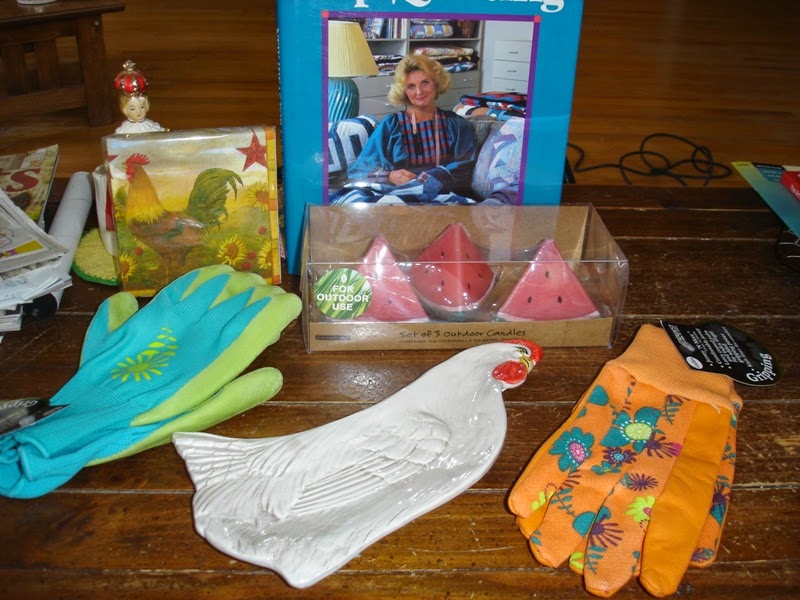 Mom sent a quilting book, garden gloves, napkins,
watermelon shaped citronella candles, a chicken spoon rest
and a check so I could pick out something special. 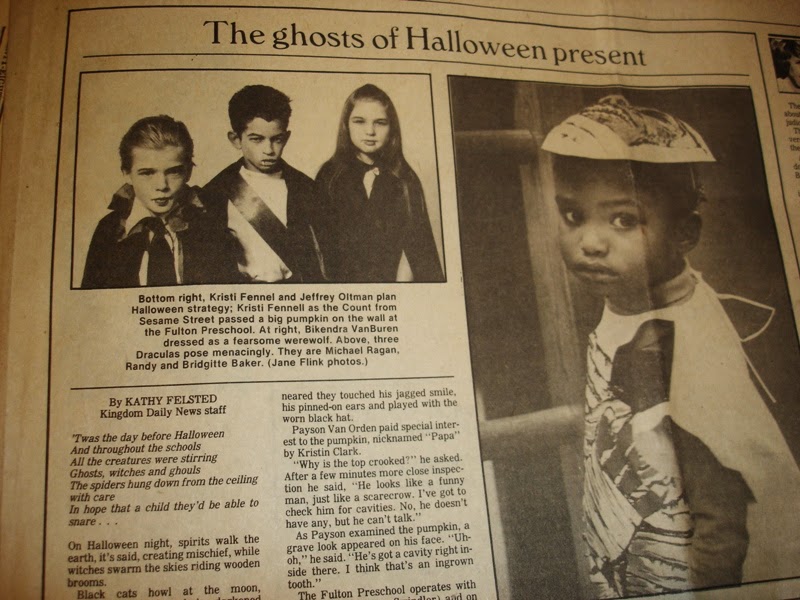 She added some extras between the quilting book pages.
This is one of my articles (Kathy Felsted) from when I
worked for the Kingdom Daily News in Fulton, MO! 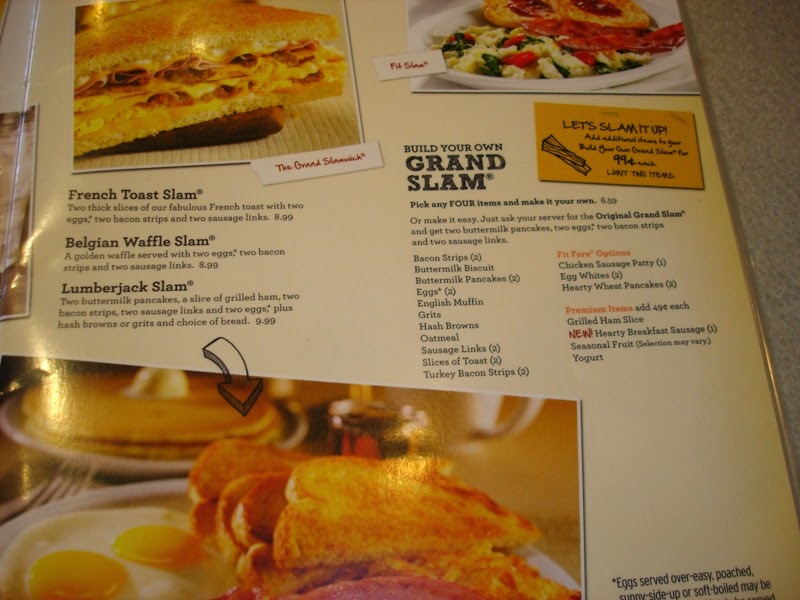 I always make a trip to Dennys for the Grand Slam breakfast.
If you go on your birthday, it's free.
Not the day before or the day after- it must be on that day
but any time during that day.

It was good but not without some issues.
How many Denny's employees does it take to make a fried egg?
Apparently three.
They asked- "how would you like your eggs"?
I replied- fried- over hard so there is NO runny yolk.

Egg #1- runny yoke-  OK,  an error, the waitress sent it back.
Egg #2- Waitress, wait.  I poke the egg- a volcano of  yoke.
The waitress is mad (not at me).
She gets the manager.
She yells at the cook.
She is overly apologetic.

I tell her- forget the egg. They hate me now.
She says, "NO, the manager will make the egg."

The manager makes the egg.
She brings it out all frowney faced, no apology,
Maybe she's mad at her cooks that can't make a hard egg,
maybe she's mad that a customer complained.
I can't tell but it's not good customer service.
Did we tip?   Of course, the waitress was wonderful.
The cook wasn't. 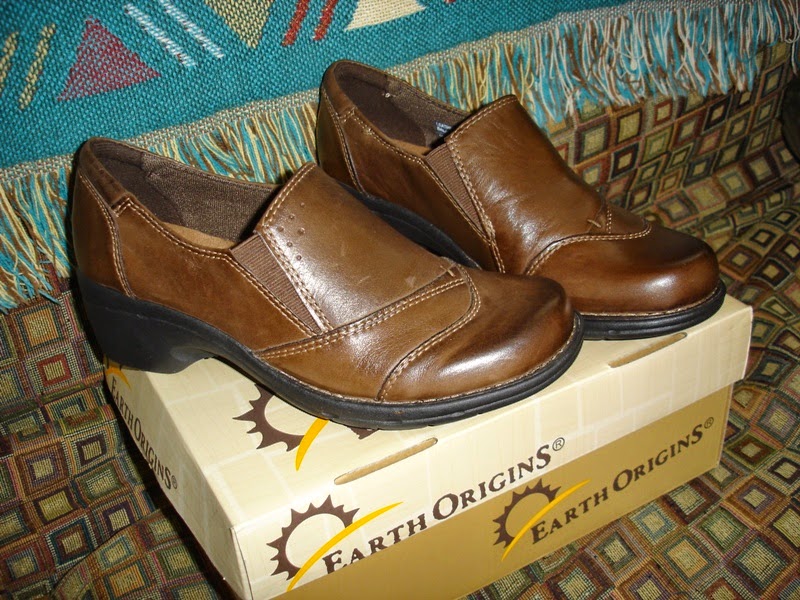 We went into town so I can do some shopping.
Besides getting a pair of shoes, we were looking for some
construction material to make a deck on the coop
since I am too short to step into the raised coop. 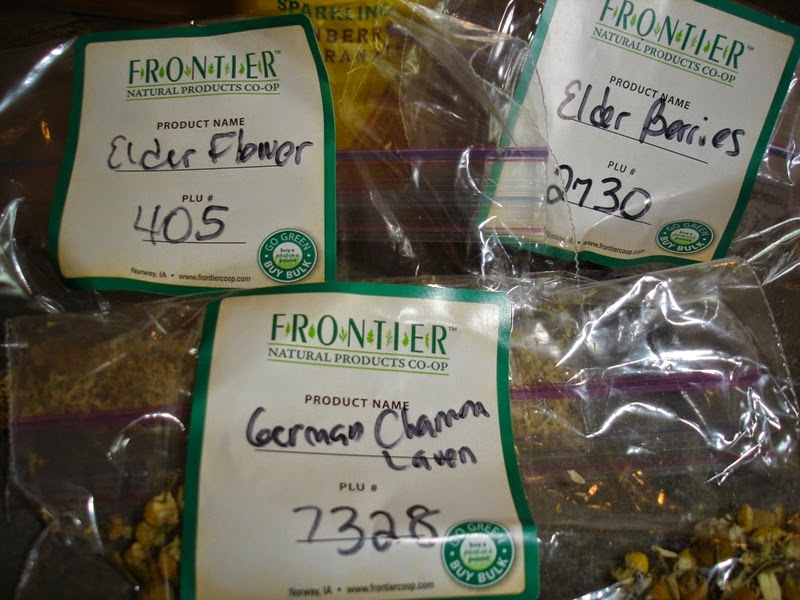 I tried to stop at an art gallery to see
a friend of a friend's paintings but street parking
was full and my husband has his ham radio antenna on the car
which made us too tall for the garage.  I'll go another time.
I did have him stop by the health food store that has been
there for years. They have bulk teas so I got some
elderberry flowers, elderberries and another variety.

Throughout the week we made several other stops.
I'm going to try my hand a sewing clothes and
Joanne's had a super sale on patterns.
One was marked down to just over a dollar- from $17!

We went to the Kirkwood Farmer's Market and some nurseries. 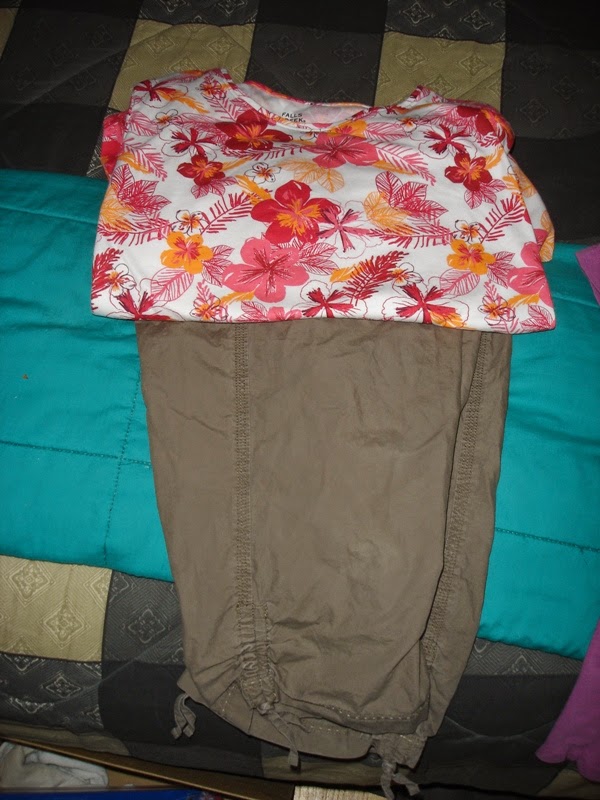 I adore shopping at thrift stores and found some items
in great shape, comfortable and fit!! 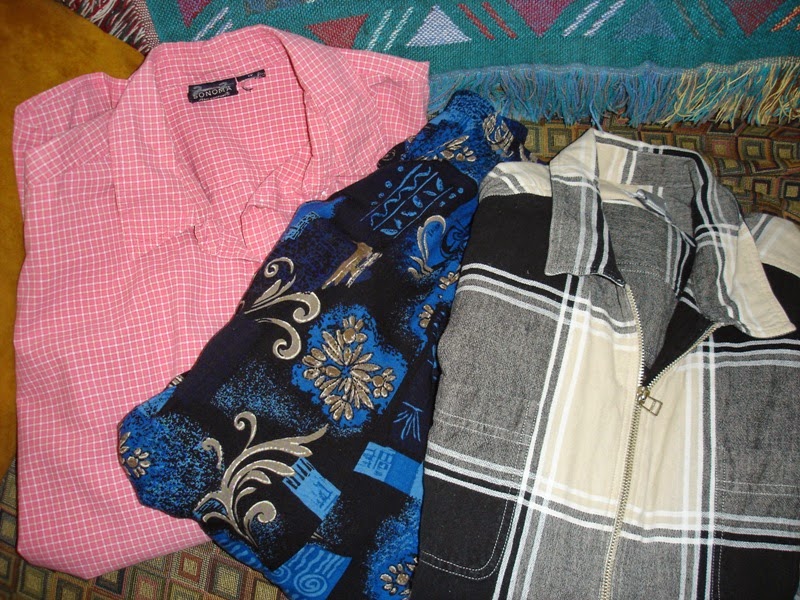 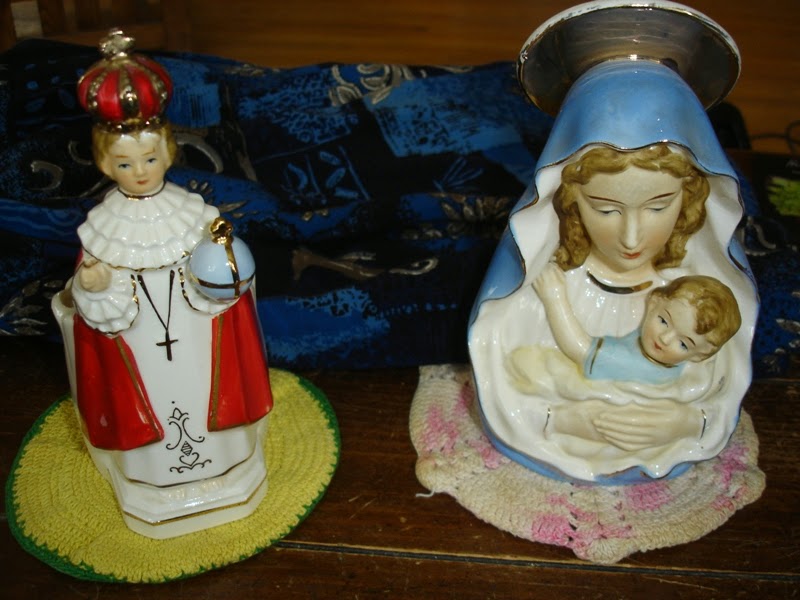 I couldn't leave the little statues! 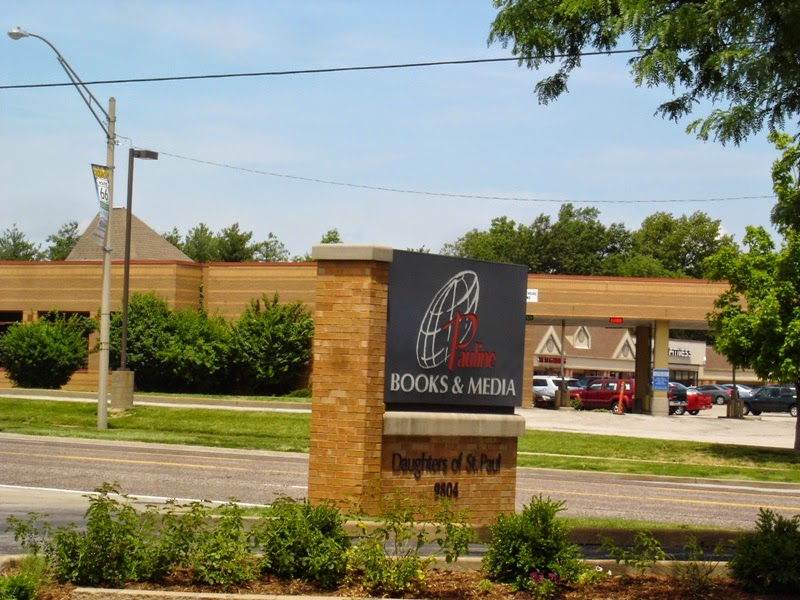 We stopped at Pauline bookstore (Catholic) 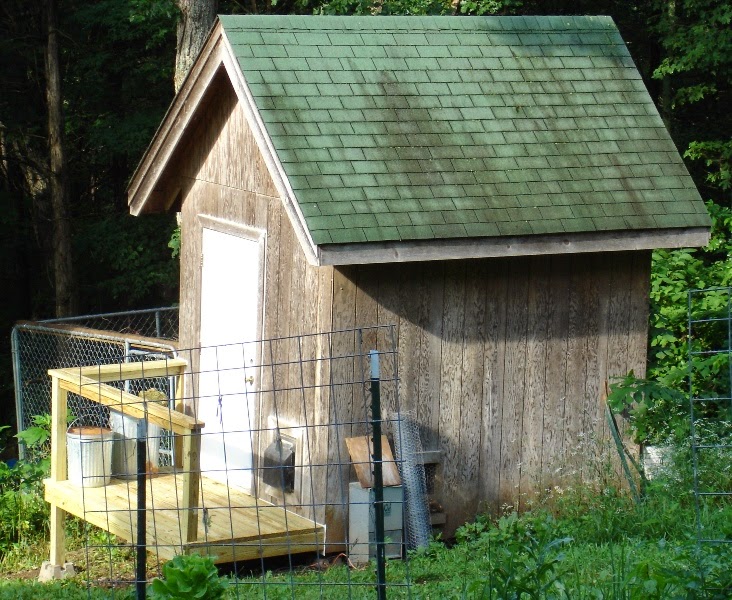 More on this later but Tom built a porch on
the chicken coop for me. It's a raised coop,
with the first step above my knees so I had to
stand on an old tool box that we pushed in and out
from under the coop.  It broke so I haven't been able
to get in!  Now it's easy, although I need the ground
raised to easily take that first step. 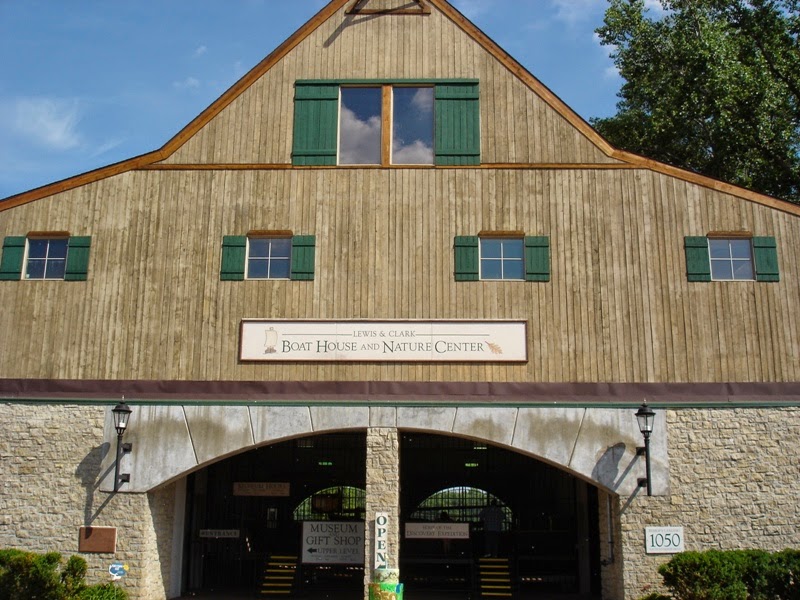 We had to go up to St Charles, MO and stopped by
the Lewis and Clark Boat House and Nature Center.
St Charles is where the Voyage of Discovery began.
More on this later also. 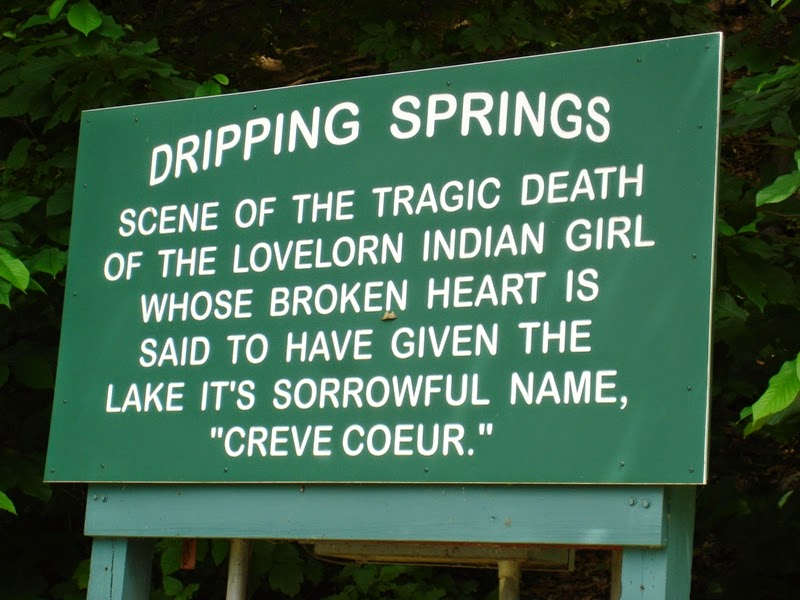 We drove through Creve Coeur park, our old stomping grounds,
so Taylor could see where the Indian princess plunged to her death.
Creve Coeur means Broken Heart. 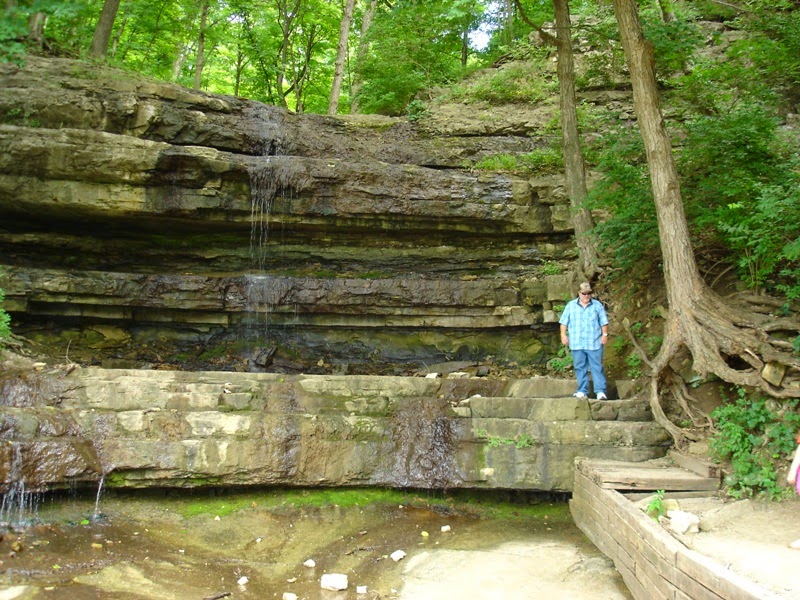 Pops decided to take a walk on the rocks,
next to the sign that said to stay off the rocks.
He didn't think they meant THESE rocks
(since the sign was off to the side).
He got Taylor up there too so it's a good thing
I didn't have to bail them out of jail!

We stopped for pizza and salad at Massa's in Ellisville, MO
and got home just before the storm hit Saturday night.

My neighbor, Simone, had walked over on Friday night
carrying two glasses, one glass had an umbrella pick filled
with cherries and  also sporting a flamingo straw.
It was Turtle Juice- yummy, and not for kids.

Later that night some friends dropped by and we sat
around the fire pit lit with one of the citronella watermelon
candle slices.  It kept bugs away and gave off just enough light
on a hot summer eve.
We watched the Space Station fly by at 9:32 pm.

Here is where you can check the times for viewing.

We spent Sunday puttering around the garden after church.
Taylor is staying the night so Tom will take her home tomorrow
while I am at work.

That was the majority of my week.
Here's a little look back over the past  55 years. 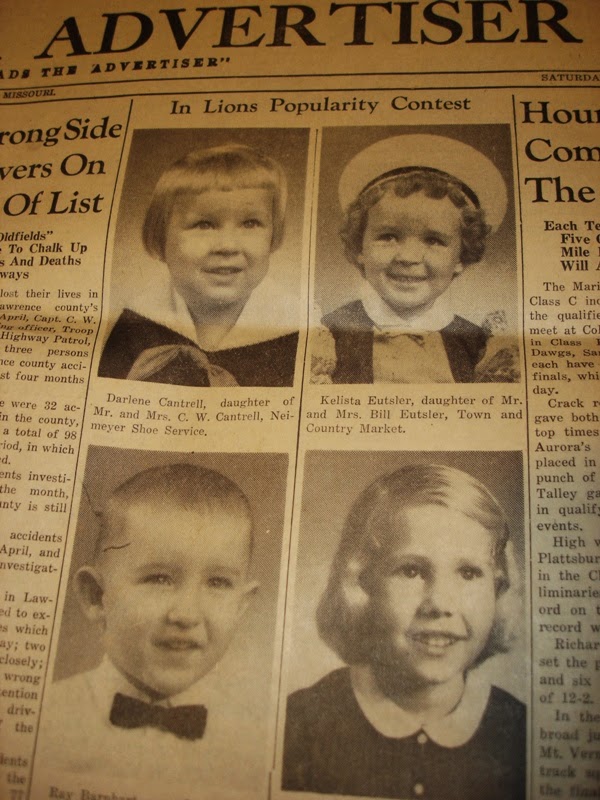 Mom sent this article in my birthday package too. 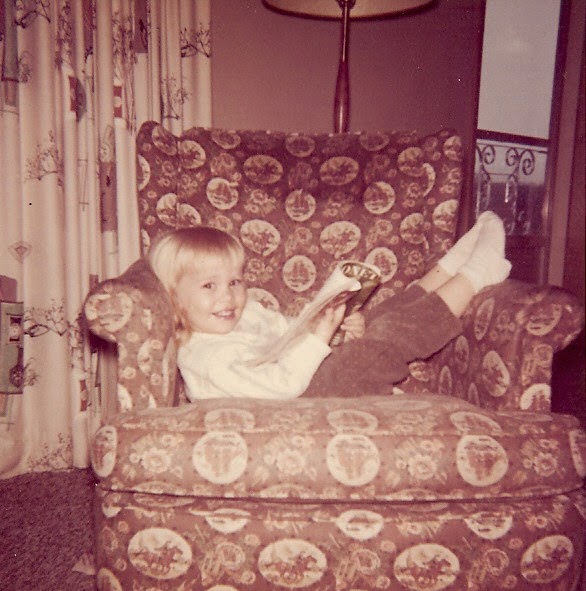 I have a few photos scanned into the computer.
Relaxing, reading a magazine.
(Aurora, MO) 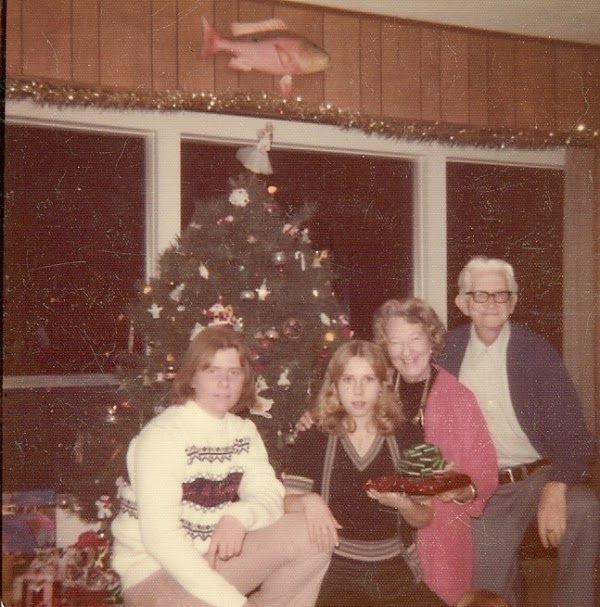 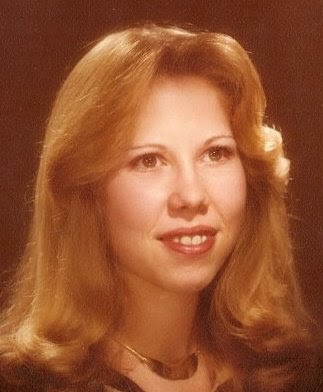 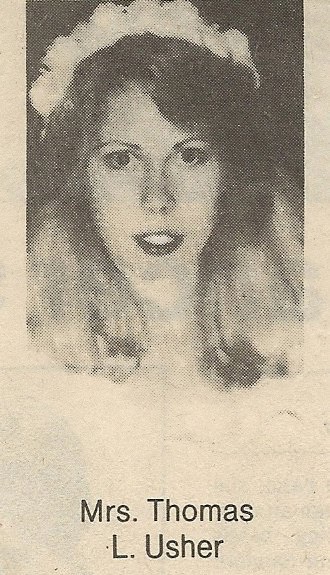 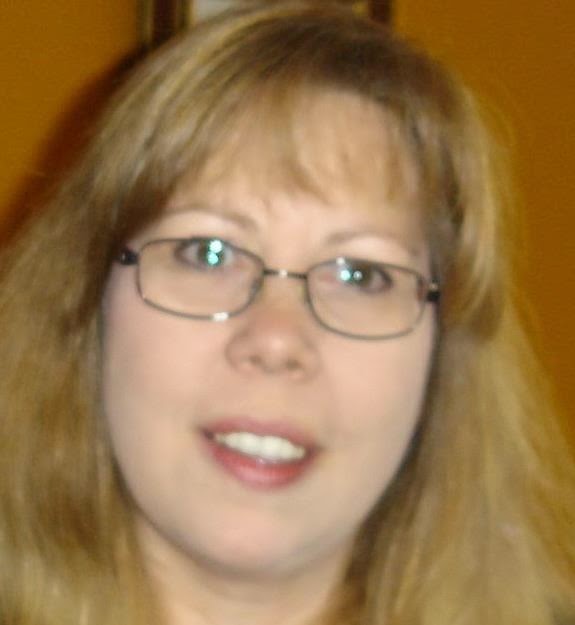 I had a good birthday week.

What a fun filled week full of great information for us to enjoy! I have that quilt book Kathy and love it! You had such a great week! I love you girl happy birthday all over again!

Loved this! The date of your birthday is one I ALWAYS remember (since it is not in that tricky short term memory that might short out). Old friends are the best!
Lorinda

Happy Birthday:) I love your shoes - they look comfy. By the way, I'm learning to make squircles.
Have a great rest of the week.

You're still a fine looking woman. Your husband is a lucky man. I'm glad you had a good birthday. I have quit celebrating mine, to be honest, once you get past sixty they aren't so fun to remember anymore!

Lorinda- It's been ages since we first met but whenever I see you, it's just like we were back in school.

Lady- Squircles! I can't say I've mastered my granny squares but they are less squircley these days, although the roundishness of them is sort of nice.

Harry- you're so nice! Thank you. Past 60 is no fun? I think you should celebrate and do something you always wanted to but never did for one reason or the other. Did you know there is an American Ferret Association? They have shows and photo contests! http://www.ferret.org/

Ha, you will have to show your ID as you don't look 55. Happy birthday week!

I have lots of grandiose plans but something always seems to come up, or I am just too tired. What I really want to do is go to Tybee island for a few days and enjoy the beach. My wife and I are working on that.

I'll turn you into a ferret person yet! Once you get one, you'll be hooked!

Yeah, 55 is good! I was 55 in March. Also, I was in Auto Zone a couple of weeks ago, and the guy who checked me out asked if I was a Vet and if I had my Veterans ID card. He's a retired Air Force dude, so he always checks for us Vets because we get 10% off if we have our ID card. I started checking around town after that and found that many stores will give that same 10% discount to Vets. I doubt that I'll get a senior discount on top of it, but you never know....

Happy Birthday Kathy, you had a great week. Susie