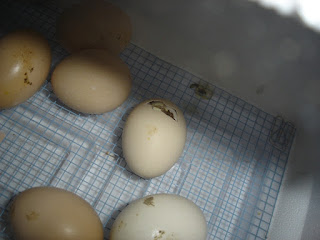 The situation became critical by Friday night as
grandchick #4 was not making any further progress
and the peeping had slowed down considerably.
The poor thing managed to break a pretty good
sized hole in the side of the egg but something was wrong.
I scoured the internet, immediately sourcing help from
The Chicken Chick  blog where there is a lot of
great information.  I know it's not an ideal situation but
the little one either needed help or it was  over. 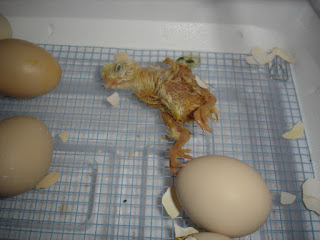 It appears that there was not enough humidity and the
membrane had hardened inside the shell; however, the
membrane had pulled away from the shell allowing me to
remove most of the shell without harm.  When I saw the leathery
membrane I knew I had to rehydrate it.  The chick was calling out
and pushing  with all it had, but it wasn't enough.

I soaked a flour sack towel in warm water and nestled the
membrane in my hands.  The shell was still attached on the back
of the chick but I could feel every movement the chick made.
Slowly the membrane softened and the chick was able to
stretch and  push against it opening the membrane more and more.

When it finally made it out, the membrane was still stuck to it's
back and head so I took it to the kitchen, still wrapped in the towel and
trying to keep it as warm as possible.  I dripped warm water on
the back of it's head and down it's back.  Bit by bit the membrane
became soft and was able to be easily removed.

The chick was still very small and weak; however, it peeped and peeped
almost as if it wanted me to keep holding it.  I told him (her?) that he
would have to dry off a bit and I'd be back.  We did make a quick stop
at the brooder so it could see what awaiting, siblings hopping around
and peeping up a storm!

It's much, much smaller than the rest that hatched.  I include photos
so you can see.  It is definitely not as developed.  I figured it was
exhausted from the ordeal so I put some water on my finger
which he drank and drank. He seemed very thirsty. 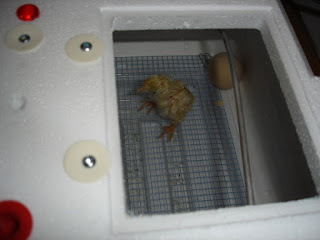 It had been thrashing around, unable to remain standing
but by the time I checked back, it was making good progress.
After he was almost dry I took him out and let him rest in my
hands.  We sat in the recliner where he became more calm and
started drifting off to sleep.  I talked to him and told him what
a pretty chick he was and when he was a little stronger we'd go into the
brooder with everyone else. 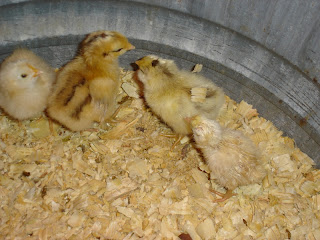 He really perked up!  He peeped and peeped until
I agreed to put him in the brooder, or not get any rest!
There was just a few pecks on the little guy which I
immediately responded to by pushing the larger one away.
This seemed to calm things down and chick #4 was accepted.
They slept together and now he follows them around learning
how to eat and drink.  You can see the size difference.
From left to right:  the two first chicks, chick 3 and then
little chick #4.  So sweet.
He is very tame since I handled him, the only one to
come up if I reach into the brooder. Maybe he thinks I'm mom. 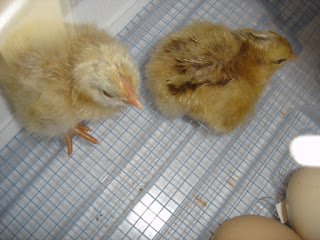 For comparison, newly hatched chick 1 and 2. 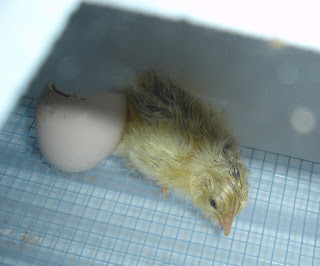 I'm glad the little one came out OK.  I do hope it isn't a rooster,
we already have 2 and I can't keep a third.  I would get rid of the older
one if  it comes to a choice.  He probably isn't fertile since we've
never had chicks until the buff orpington rooster came along.

I am so thankful for all the great information on the internet,
accessible on demand, and for all the bloggers that
provide tutorials on how to manage emergencies.
What would I have done without you all?!

Posted by Kathy Felsted Usher at 8:26 AM

Oh wow! I wonder what causes this dehydration in the shell. I'm figuring that is what it is...anyway. Glad you were there to render aid. I've not ever had any chicks. One of my hens became broody last year...but not chicks resulted. I candle every egg she was nesting on; but none were viable.

It's a delicate process. Glad your little chick made it.
Pat

Wow, you really demonstrated some determination, and know-how, to help the little one along. Strong work helping the little fellow (or gal) to make it. I would love more than anything to have a rooster but aside from the mess they make I think the crowing would be most unwelcome in our little urban oasis here. It wouldn't bother me but I'm pretty sure my neighbors would have a thing or two to say about it!
Great job Kathy!
Joyce

Congratulations on the new chicks, especially #4! Hope he (?) makes it!

What a great story. I'm so glad he made it.

I'm glad you were able to help the little one, what a great chick grandma you are! :)

Sounds like an ordeal!! So glad your little chick made it out okay!!

I am so glad he/she made it! So cute! I thought about hatching chicks this year, but decided I would probably stress out too much and be an over bearing chick mom...

Aahhh.... so cute! Glad the little one made it! I'm always rooting for the runts, so this story made me feel good. Thanks for sharing and making my day!

So glad you had great success! Did the chick end up a he or she? Can't leave us hanging like that. ;)

So glad you had great success! Did the chick end up a he or she? Can't leave us hanging like that. ;)

I think a She. She just went out to the coop today. There's no indication so far that it's a rooster.