Sunday In the Flower Garden 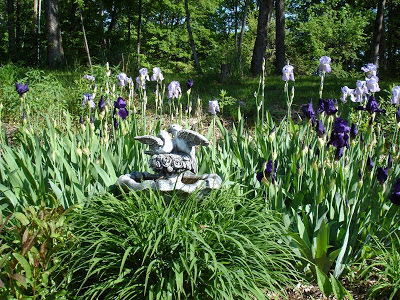 What Season is This?
These Up and Down temperatures are challenging at best.
I quickly snapped a shot of my bird bath upon hearing the forecast
of low 30s for Saturday night.  With temperatures in the city a few degrees warmer,
I wasn't sure they would make it.
Great news- they are still thriving! 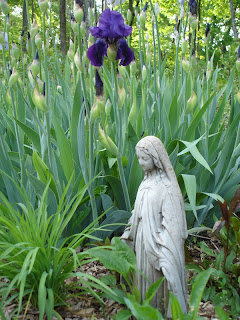 Maybe I had a little help.
I have Stella D'oro lilies in front of the iris.
Some babies are cropping up too. 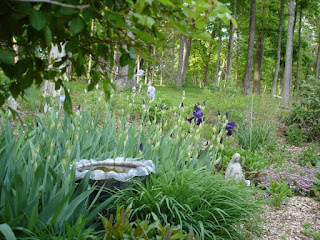 I had left out the bird bath topper during the storms
last week since they predicted hail.
There was snow to our west and south west. 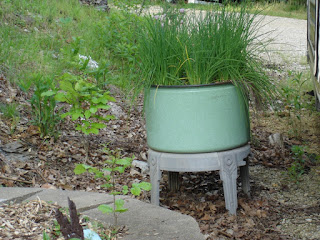 The chives in the old wash tub came up pretty well again
since we've had so much rain. 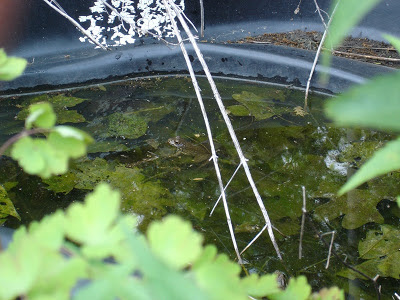 The little frogs are back and planning their families. 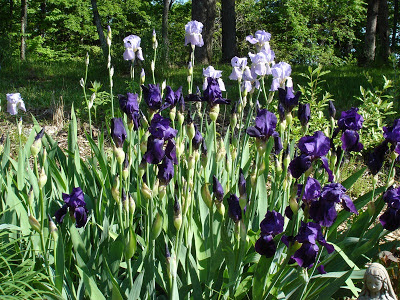 The  dark purple iris are from the bed I had in the old place
about 13 years ago.  A neighbor's light purple ones had
made their way under the fence and  joined mine
so a few of them made the move too. 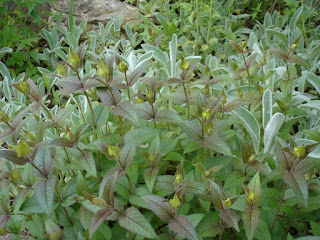 These are bee balm blooms getting ready to burst open. 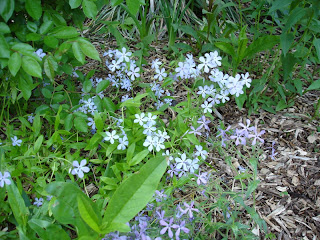 This grows wild everywhere, even under my roses. 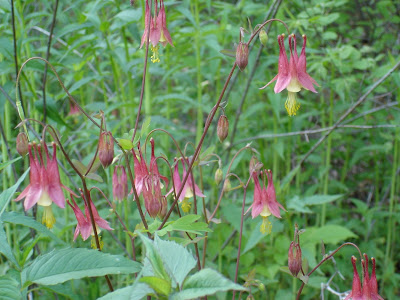 The wild columbine is one of the earlier flowers,
very striking. 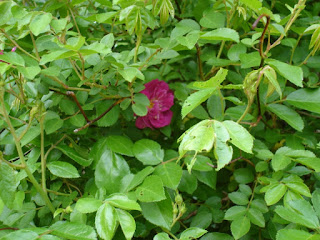 And a little rose peeks out, the first bloom. 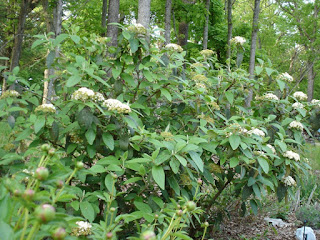 I seriously trimmed back the viburnum
but it's as thick as ever!  It makes a nice
screen between the sitting area and subdivision road.
You can barely see it in the third photo
to the extreme right.

We attended church this morning and then headed
to Applebee's for lunch.  I love their club house grill
but they have changed it AGAIN!
I passed on my favorite sandwich and opted for
the crunchy butterfly shrimp which is delicious.  The other
half will be dinner tonight so I guess it's like going out twice!!

We stopped to get some tomatillo plants since I didn't get
the seeds started in time but so far we struck out!
They had lots and lots of them a couple of weeks ago
but now, none!!!.  I'll keep checking around.

I also have some flowers to plant in pots still and a couple
of peppers left over from the garden planting.  We also spent some
time fixing the watering system  but I'll post on that later.

Beautiful flowers! I'm glad they didn't mind the colder weather. The columbine is especially pretty. :)
Happy Mother's Day, it sounds like you had a good one!

Lol. We are having the same weather, Kathy. I planted seeds like a mad-woman last week only to hear it is going to be in the 30s tonight. I have been in my flannel jammies all day today. Brrr.

Yep! I would have been in flannel jammies too!

Beautiful garden. Thanks for sharing. It's supposed to drop to the low 40's here tonight, cold, but not as cold as around you. Happy Mother's Day. :)

Nice pics. I really had to study to find the frog!

Yeah, easier if you click to enlarge. My camera is OLD, only 3 x zoom and not as clear as the new ones. Someday I'll get a new one, this one is about 10 yrs old maybe.

Hi, you hit my Spam folder again but this is important. I tried to go to your blog and I was blocked with a warning of Malware linking to it. Do you have a comment or an ad with a link? I don't have your email or I'd take a shot of what I see.

Don't you get my email when I post here? I don't have any ads. Maybe it's one of those things I have at the bottom of my page. I'm going to take them off.

No,does it ask for your email? If so, it must be a blogger thing. I never see anyone's emails unless maybe I have it turned off without realizing it.