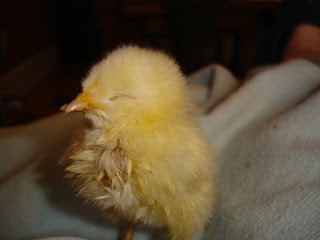 It's a special needs chick-
one eyed and cross billed but holding it's own,
with a little help maybe.

You can see how wet it is due to the slurry I make
out of it's crumbles so it can scoop them up in
his crossed beak.  I also believe it can't see
well, if at all.  It constantly misses it's bowl
so I have to aim at where it pecks unless I
can get it to sit still rather than twirl around in circles.

I don't know why its chest has a large lump.
Is this normal for a cornish cross?
Is it just more noticeable since he is wet?

He heard me play the video and started cheeping with it!
You can see how he eats- this has been the best attempt. 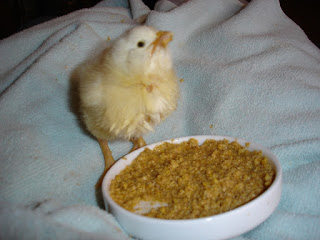 He  bends, pecks/scoops and then lifts his head to swallow.
Again, this was a first, I normally have to follow his
head and figure out where he is going to  peck. 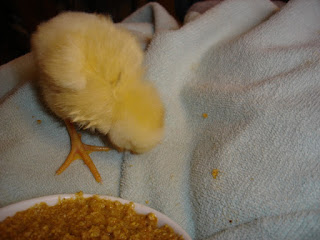 Often it is this, pecking down but at nothing.

I wanted to sneak him into work so I can feed it during the day
but now that I have moved departments, I have a cubicle
which would be very disruptive to those around me.

He made it ok today.
Maybe he has me fooled into  babying him!

Not only blind, but perhaps no sense of smell either. You'd think he could smell where the food was.

Awww, poor guy. Looks like he can't see very well. Eventually he should get the hang of it though. His chest may be big because of his breed, or it could be his crop if he ate a lot of food, but it doesn't look like he really eats all that much.

Poor little fella, he's lucky you take such good care of him!

I've read that some chick(ens) have their beaks... trimmed? but feed okay? If the crossed beak causes a lot of problems eating, perhaps trimming it a little might help?