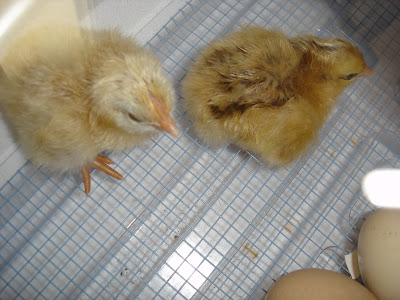 I've Got Grandchicks!
As I was driving home I got the call, two hatched!!
We almost gave up after a power outage disrupted our incubation;
however, we decided to give it a few more days.
We didn't see what we thought we would when we tried to candle the eggs
and figured we had just been cooking them for the past twenty odd days.
But there you have it- at least two made it. 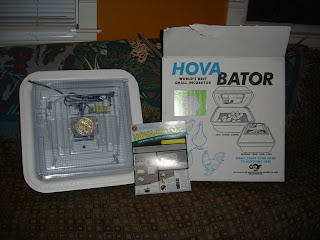 We had a choice of two incubators locally.
We selected the Hova Bator
and our friends tried out another brand with
a dozen or so of our eggs.
Theirs hatched right on time but they were not
included in the outage. 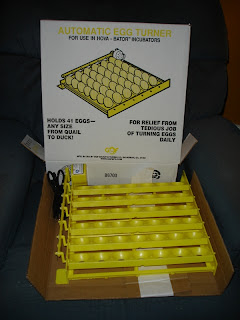 We took advantage of the egg turner. 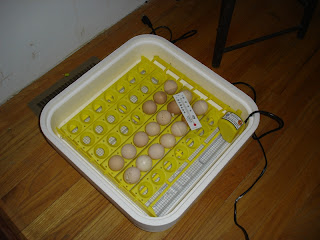 We added a few eggs since we saw evidence of
fertility as the buff orpington rooster matured. 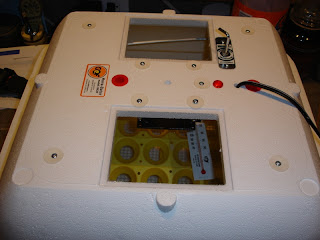 We plugged it in the library, the least used room
since the (ham) radio shack moved to the basement. 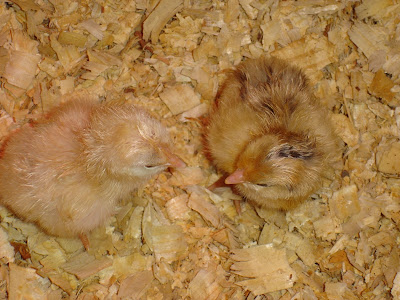 My husband thought he heard something when he arrived home.
We have one of those bird call clocks- but it wasn't on the hour
so he thought there was a bird stuck in the chimney.
Nope.
Then he remembered the eggs.
Yep !!!
Two little guys cheeping for someone to come get them.
They were all nice and dry so I guess they hatched earlier
in the day.  They are a little wobbly when they walk
and already pecking at each other!
They walk around a bit,  run into each other,
and then peck around a little.  It must be exhausting
since, in a blink of an eye, they fall soundly asleep.
Until they hear the next new, strange sound!

What type of chicks are these?
I wonder if we'll see more hatch?
These are supposed to be Buff Orpingtons,
which is what the majority of the hens are
but we do have a couple of other breeds.
All the photos of Buff chicks look like the light yellow ones.
Any ideas on the darker one? 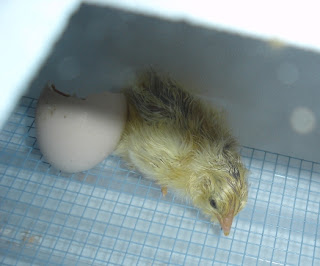 We'll introduce the new guy to the other two tonight

The yellow chick looks like a Buff Orpington, but the other looks like an Easter Egger to me.

Congrats on your new babies. They look so cute.

Kathy, they look really pretty and healthy. I'm glad that you waited. Wonderful it is so much fun isn't it? I have a hova bator I have some trouble keeping my humidity right but comes in handy.
Thanks for sharing and Congratulations on your new chicks!